Zombies Ate My Neighbors is blatantly better than every other game, ever! 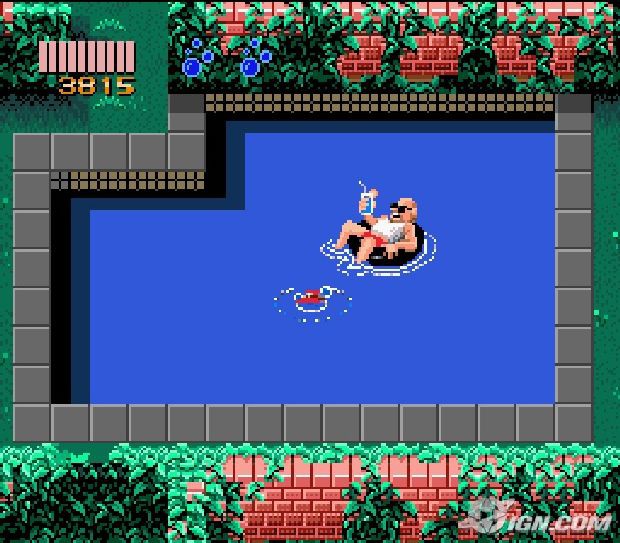 Games often steal all their bits from movies, especially obscure movies like what Duke Nukem did with They Live, and I doubt anyone will question how amazing it is when you stumble into a secret room inside a castle while the creepiest music the super Nintendo could belt out plays, and of course, Frankenstein's monster activates! Then he proceeds to kill you with electricity! If you're lucky enough to survive that encounter, later on you'll deal with him and Draculas at the same time, with Werewolves, Zombies, and many other terrible creatures from monster history after you.

Yes, some of them even have chainsaws. And just like Resident Evil 4, they can and will cut through doors to come after you and are every bit as vicious as you expect a man in a hockey mask with a chainsaw to be. Just, instead of encounter one every so often, you'll have about six chasing you, each of them ripping through a giant hedge maze while you try to rescue cheerleeders. It is single handedly the greatest encounter ever, because you'll undoubtadly use a monster potion on this level, turning yourself into a creature powerful enough to blast through doors with bare hands and make these Jasons feel like those poor kids in the RV in Friday the Thirteenth part six. In Europes version of zombies Ate My Neighbors, "Zombiess," these gentleman have axes and look more like lumberjacks. Still terrifying to contend with, and still more amazing than anything in Resident Evil 4 or 5.

And furthermore, the storyline is much better in Zombies Ate My Neighbors than in any Resident Evil game. Both characters available are masters of unlocking, by packing a bazooka!

Go ahead, suggest a game, any game, and I will come up with a reason why my favorite game, and the absolute best game of all time, is superior to that game. Nothing is as sacred and great as this game.

Just don't mention Ghoul Patrol, ever!
#Community    #Retro
Login to vote this up!