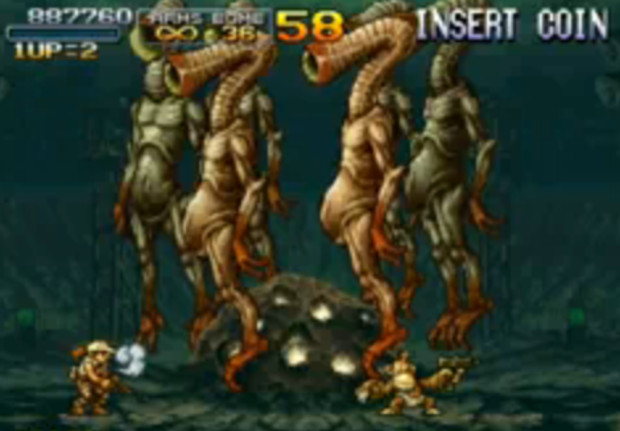 With the alien menace defeated, the artifact begins to rise out of the ground, and the thing gets down to business. Your task is to defeat the machine/UFO/whatever by blasting the top of it with everything you’ve got. Your attempts to destroy it are met with opposition, of course. The machine makes obelisks drop out of the fucking sky along the path of a beam of light. You can either shoot these obelisks to destroy them A.S.A.P., or use them to leap up and shoot the hell out of the glowing top of the thing. Success in this section is all about speed. The more damage you do to the device, the quicker it spits out obelisks.

With the alien menace finally defeated comes the close of one of my favorite Metal Slug levels. This level distances itself from most MS level by being more fantastical with the inclusion of zombies and aliens (which, granted, are the main focus of MS3’s story). Also, there’s no need for you to use one of the titular Metal Slug tanks. Why would you, when you’re the fucking unded with one of the greatest zombie powers in gaming?