When My Life Would Depend On An Eight-Point-None

9:51 PM on 06.01.2010 (server time)    0
This past week, as with pretty much any other week, a reviewer whose name rhymes with Slim Curling had his opinions called into question by the slavering hordes, namely in regard to Alpha Protocol and ModNation Racers. Reading the actual words in the reviews justified both games' scores quite well, as per the Destructoid metric, but noone on the internet can read or write anymore, so that was moot. 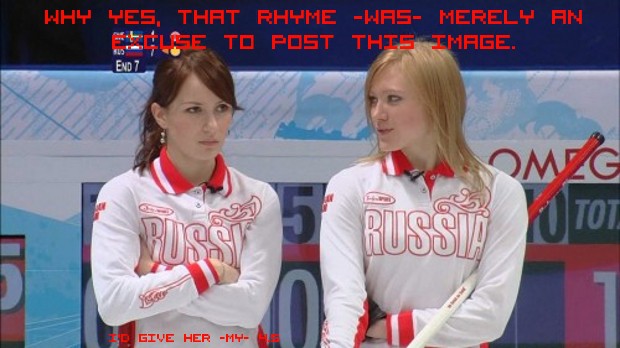 It occurred to me that both of these games have had a fair amount of excitement and hype surrounding them leading up to their release, so I went back through Mr. Sterling's last few months of controversial, "low-scoring*" reviews to see if the pattern held. Wouldn't you know? Aliens Vs Predator, Army Of Two: The 40th Day, and Assassin's Creed 2 all got a fair amount of trailers, video shorts, clever GameStop ads, and what-have-you heaped upon the internet in the months leading up to their release.

Oddly enough, those all, along with Alpha Protocol, begin with the letter A, but that's material for a conspiracy theory and little else.

Another thing I noticed is that almost all of Jim's much-berated reviews were posted the day of, if not before, release for the games in question, which makes it even more unlikely that any viable counter-opinions could have been formed by the time of review. Save for beta/demo experiences or basing one's opinions on other reviews released at the same time, there's no pracitcal reason for anyone to have the sort of vitriol these reviews receive on a regular basis. The only cause I can readily see for any of this is the hype.

In a world where games are being cranked out on a weekly basis on nearly a dozen different fronts (counting disc/cartridge formats and apps, Wiiware, etc), conventional wisdom seems to have shifted from "take the time to make a game that stands out so people will buy it," to "make whatever you can as fast as possible and dump tons of money on marketing it to sucker people into buying it, regardless of quality." Perfectly good capital that could go into funding development is being wasted on shock and awe, and in response, gamers are becoming less and less receptive to actual game quality and more attuned to circuses surrounding a big release.

The whole thing is less a double edged sword and more a seventeen-bladed, whirling chainsaw mace of Screwing Over Everyone. The longer this carries on, the more no one will win, and the greater a likelihood for the video games market to crash again like it did between the Atari and NES days. Dissatisfaction over review scores is just the tip of the iceberg, as this problem ripples throughout all aspects of the industry.

For starters, one of the reasons many games haven't been getting particularly high scores from reputable sources is that they just aren't finished. Assassin's Creed 2 had a fair share of glaring, and mostly fixable, bugs that someone should have noticed before it went gold, and had DLC tacked on later that should have been on the disc. Alpha Protocol was, by many accounts that may include someone who worked on it, a scattered mess that should never have seen the light of day. Dark Void plays as if the only playtesting was done by some sort of robot that could tell if it was technically functional, but not whether it was actually fun. Players end up purchasing this trash regardless, due to all the advertising that's gone into the mess over several months, if not years, ahead of time, and publishers thereby end up getting away with the whole affair.

This, in turn, makes reviewers look bad if they talk trash on something that's making bank anyway, giving them the choice to abandon their integrity in the name of popularity and renown, as well as buttering up PR reps, or to keep it real and have to put up with the awful people that comprise most of the internet sharing their baseless opinions in the most illiterate ways possible.

Subsequently, gamers who actually keep up with reviews are left confused by conflicting reports and wildly variable scoring that results from the division of the above reviewing camps, and tend to be forced to choose whom to agree with based solely on pre-release information. Seeing as how your average, honest review doesn't feature many fine, French models, your standard chump is going to go with whichever opinion lines up best with the established hype.

Clearly a success, the hype monster is fired up once again for the next game that needs to be a blockbuster, the cycle continues, and more conscientious gamers such as myself have to wade through a minimum of three pages of idiotic tripe, about half of it in all-caps, before being able to get our two cents in. There's no one man to blame for what many claim as "review bias" or "trolling for page hits" - it's more a media machine, one which many of you are more than glad to be cogs in, whether you realize it or not.

It's not as if this is a particularly recent phenomenon, either, which is what really stuns me. Plenty of hype monsters have actually thrown themselves on their own swords over the years, with little to no impact on widespread realization of what is going on. Remember how Peter Molyneux's up-talking Fable** took quite a stumble once the game was released? How about Brutal Legend, which looked like the greatest thing ever, until Tim Schafer*** came out and told everyone who wasn't getting into it that they were playing it wrong? The whole Killzone 2 preview video scandal, which finally got admitted to and "explained" recently? You're going to tell me that noone has caught on that maybe, just maybe, some of these plugs are complete and utter bullshit?

Granted, I don't think the system is liable to change anytime soon. Lying Your Ass Off is the accepted method of selling anything in a capitalist society, just as much as Kissing Ass is the key to being upwardly mobile, be it in games journalism or whatever else. I'm just asking that more people start taking the dog and pony show into account when they're forming or expressing an opinion. Heck, even the most honest pre-release opinions and information are still based on an unfinished product, so there's plenty of room for things to go wrong (or right, for that matter) between a press release and a ship date.

Consider renting before you buy, or bumming the game off a friend, rather than just inflating the sales of games that don't deserve it. And for crying out loud, don't think you have any right to cry foul on anyone's review if you haven't yet played the game yourself. It's embarassing, at best, and just as dishonest as the system that led you to that opinion in the first place. There may be little room for revolution, but with a little forethought and indpendence, we might just be able to cut back on the scads of low-scoring games, making life easier on all our wallets and making the 9.0s and 10.0s feel that much more common and deserved.


* - By "low-scoring," I mean anything below an 8.0, which seems to be the cutoff to keep the douchebags from coming forth. Hence the title, and the quotation marks.

** - As much as it's starting to feel less and less genuine each time he apologizes, I give Molyneux credit for actually doing so, and can kind of believe he's just too big a dreamer for what Lionhead can actually produce.

*** - Schafer, on the other hand, totally signed his douche card with his How To Play Brutal Legend crap. If you wanted to tell us to get into the fray in the RTS stuff, you should've made the game force you to do so more actively and in a more fun way, dude. Just admit your vision and the reality didn't quite meet up and wow us with the next DoubleFine game.
#Community    #Rants
Login to vote this up!