Labor Day: Of Course, You Realize, This Means Wark

8:06 PM on 09.07.2011 (server time)    0
A lot of Playstation veterans will tell you that Final Fantasy VII is the game for which they got the system, that it was the best Final Fantasy game EV4R, that they would kill for an HD remake, et cetera and so forth. I'll admit that it was a deciding factor in begging my parents for one, even though we already had an N64 (and an SNES, and an NES, and Game Boys for both my brother and I), and a welcome sight when I unwrapped my presents on Christmas Day back in 1997.

Beyond that, I beg to differ with the rest of the obsessed. I kind of enjoy how FFVII has been blown up into its own little franchise, but FFIV is still my vote for best Final Fantasy, and in all honesty, I have no desire to play through the main game ever again. I did my time the first run through, and I'm here to share the tale of how Midgar, and the rest of the world of Gaia, managed to eat the bulk of my holiday break from school that year.

A fairly solid history of jRPG play on my SNES had gotten me well-conditioned to the completionist attitude many hardcore RPGers develop. Chrono Trigger, I'd ground my way to double-star stats for every character, along with their best equipment. FFIV, I'd found all the secret items, best ending in FFVI, did everything in Earthbound... the list goes on. One of my parents must've noticed, because they hooked me up with the Final Fantasy VII strategy guide along with the game and the Playstation on which to play it. I mostly skimmed the early bits, not wanting to spoil too much, despite already knowing some of the huger twists (as mentioned in another entry). But, when I rolled into the list of Summons, I stopped and began to dig. 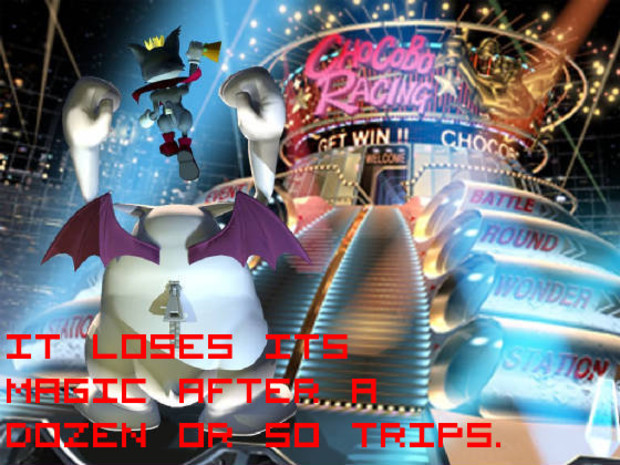 By the time I finally struck Gold, the rest of the lights in the house, aside from my television screen and the fake candles in the windows, had been doused so my family could sleep; luckily, I'd holed up in a corner in our downstairs family room so as not to disturb anyone. That was almost shattered the moment I realized the final newborn I needed wasn't quite the normal yellow color, and wasn't any color I'd encountered as of yet over the course of the day. Stifling a victory cry, I thrust my controller triumphantly into the air as I leapt from my seat, yanking the cord from the system and nearly toppling it onto the floor. Thankfully, I avoided making my latest, successful effort all for naught, and slid the system gently back from the shelf's edge it'd perched precariously upon, hooked myself back up, and saved.

It was a struggle, but I managed to force myself to go to bed straight away, and left Round Island and its Knights for the next day's play session. I immediately set to Mastering it enough times to give everyone a copy after I picked it up, and just as quickly regretted selling off Cloud's Organics sword earlier in the game, since I couldn't see a use for a weapon with three disconnected Materia slots, even with triple Materia growth. I'd eventually go on to take out all the Weapons, get Master Materia of every variety for all of my characters, and pretty much obliterate the final battle with my maxed-out crew, but the grinding and Magic Pot feeding that it took to get to that point would never quite match the tedium that was the great Chocobo hassle.
#OpinionEditorial
Login to vote this up!