4:26 PM on 10.30.2012 (server time)    0
Though I recently ran through some of the Halloween offerings on the free-to-play scene, some wallet-friendly haunts had yet to unveil their spookier side. Now that October 31st is nearly upon us, the few stragglers out there seem to have come out in full, spooky force. Here's a list of who's joined the party, and what they brought with them. 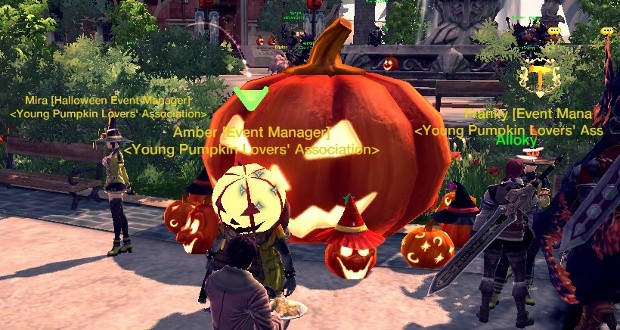 Coinciding handily with their move from closed to open beta, RaiderZ has chucked pumpkins wherever they can across their servers. Not all of them are decorative, however; lootable pumpkins are spawning all over the place, and their contents, as well as candy collected from fallen foes, can be traded in for Halloween outfits, toys, and even a witch's broomstick mount. The outfits are, unfortunately, temporary, but permanent versions can be purchased in the game's cash shop. Unlike most of the other seasonal events going on, RaiderZ's Halloween celebration is running all the way to November 20th, so you've got plenty of time to hoard more treats.

While Firefall's open beta is still code-reliant, those who've managed to get in already or manage to sneak in during the next couple of weeks can celebrate the Night Of The Melding. Luau Larry kiosks in the game are selling a slew of Halloween goods, including decorations like spiderwebs and tombstones, and anyone can buy one of several masks from the New You stations, in styles such as a skull, hockey mask, or pumpkin, among other things.

Additionally, most of the other free-to-play All Hallow's action is still underway, so get out there and get your freebie on, even if you're too old to be taken seriously trick-or-treating.
#ShareonCommunityBlogs
Login to vote this up!