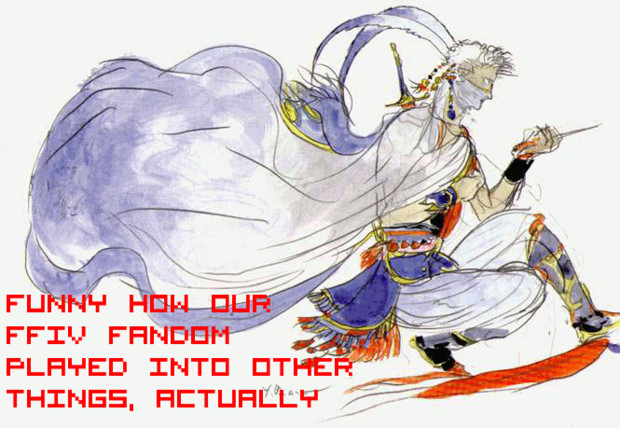 And that was it. Some explanations, an awkward hug the following afternoon, and I was on the rails again, homeward bound. There were some tears on the ride back, and we mostly fell out of touch after she left for college, in part due to a lack of dating much in high school (because of the whole, nebulous thing we had going) leaving me ill-prepared to handle rejection. We chatted a bit on myspace a couple of years back, mostly because I had some questions about gelding and horse retirement (I can't remember why, either), and saw she was still on the veterinary track, so I imagine she's doing well. Personally, the whole affair pushed me to finally stop being lazy and get into shape, and the writing she often inspired, while thematically lame, gave me plenty of practice and got me in touch with a passion I wasn't entirely sure I had before then. It also showed me certain aspects of myself I needed to refine, especially in the aftermath.**

Video games were certainly the last place I expected to find a first love, but it just goes to show you that playing online can be just as effective and emotionally potent a social forum, sometimes, as any bar, workplace, or other "real world" event.

* - No, I'm not going into any details on said fic material. The last vestiges died along with Geocities, and I'd prefer it stay that way.
** - On the off chance you ever read this, I'd just like to say, I'm sorry about a lot of things I said and did when things fell apart. We should do drinks sometime and catch up.
#OpinionEditorial
Login to vote this up!