Better With Age: Peeling Back the Layers of Dishonored

Dishonored is the sort of game that begs to be played multiple times. The first playthrough acts as an introduction to the game and the world it exists in. As you revisit the game the second, third, fourth time, the richness of the world’s stories, and the nonlinear design, opens itself up to you. A previously insignificant corpse lying against a wall might take new meaning at a second glance and stronger examination, or you might find a new approach to reach and tackle the same objective. Hell, you might even find a hidden subquest on that new route to your primary objective.

You might get distracted and end up running around to new parts of the map that you didn’t even know existed. The first playthrough acts as a glimpse of a statue, and each subsequent time we play the game, we view that statue from a new perspective.

There is simply too much going on in each level of Dishonored for you to discover them, or simply be aware of them, the first time you play. For example, while you can pick up on little environmental pieces of storytelling the first time you come through an area, because it is your first time there, you are likely focused on your primary objective, blinkered forward by the objective marker hovering in front of you.

On subsequent returns to the same areas, just by virtue of the fact that you’ve already conquered the main objective, you no longer feel as compelled to rush to the finish. You have time to poke and feel around the area you’re in.

One of my favourite examples of a moment of environmental storytelling was found in the upper floor of an apartment near Kaldwin’s Bridge in ‘The Royal Physician’ mission. This apartment is not the only way to reach Kaldwin’s Bridge, but is one such way; as such, it’s entirely possible for someone to completely miss it their first time through. Even if you don’t miss it, a first time player might be more focused on the ludic objective at hand, represented by the objective marker hovering in front of them.

They might not take the time to observe the detailed world around them, to observe in that apartment two dead Bottle Street Gang members, one lying on the floor with a machete in his chest, the other slumped in his chair by a bunch of empty bottles. The few coins that lie on the table between them on one level simply serve as currency for our protagonist, Corvo, to use to upgrade his gear or replenish his resources. However, they also serve to flesh out the story of Jack and Quilty, two men in Dunwall who abruptly met their end. 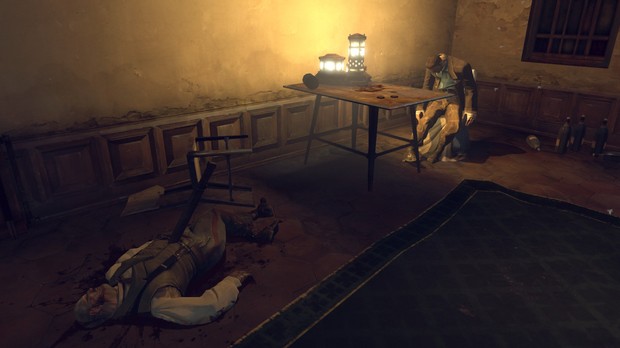 Where most notes that are found in Dunwall serve as lore-building tools, the note found on the table between Jack and Quilty is simply a betting score sheet, with Jack winning by a suspiciously large landslide. The implication is that after being cheated, Quilty, in a drunken rage, killed him with a machete to the chest. This simple and small scene illustrates the vices that have decayed the moral centre of Dunwall. Quilty, too, has his own vices, having seemingly overdosed on the plague elixir that his gang, the Bottle Streets, bootleg.

There were many other scenes like this which I didn’t take notice of until my later playthroughs, scenes that show how much care and detail Arkane has put into their world. Even a simpler scene, like the corpses of plague infested lovers in the arms of each other demonstrate how much Dishonored begs to be replayed again and again.

Much too like it’s world, the multi-faceted gameplay of Dishonored ages gracefully like a fine Tyvian wine. On my revisits to Dunwall, I played within self-imposed rules, and recontextualizing the game’s ludic boundaries increased my understanding of the game’s play systems, while also simply giving me a new challenge! Playing with no magic really showed me how much harder the game can be. Without the magical ability ‘Blink’, for example, higher places were often inaccessible, or at least inaccessible with ease. No longer could I quickly escape a guard, have a higher vantage point, or have an easy way to get through a level. Stripping Corvo, the magical assassin, of his otherworldly powers made me a much more aware and cautious player. 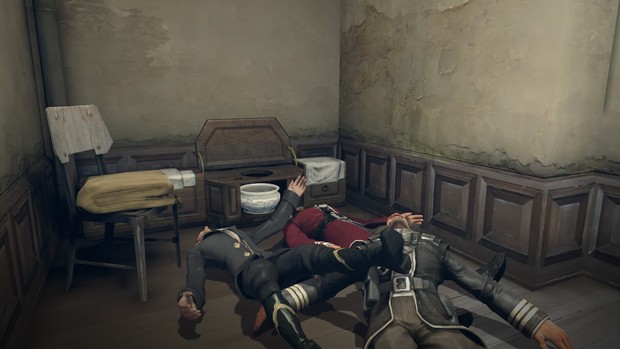 Of course from a combat standpoint, the game changed: I could no longer summon a swarm of rats to get rid of enemies, or stop time for crowd control. Less expected was how my lack of magic changed the very way I approached the game’s levels. In the second main mission, which takes place at ‘The Golden Cat’, an upmarket brothel, I literally had to go through the wide front entrance. All the times past I could easily blink up to the roofs of adjacent buildings and sneak in through an upper level window, or even possess a fish and discreetly swim into the building’s basement. Without magical mobility skills, as well as without the ability to see guards through walls in what is now an industry-standard ‘Detective Mode’ (also see: Arkham Asylum, The Last of Us, Deus Ex), I found myself playing the game in a very different way, often finding myself overwhelmed by enemies.

This subtle limitation on Corvo’s abilities led to less money spent on Mana potions, and more money spent on faster gun reloads, more grenades, and a more violent and overt approach to dealing with enemies. Dishonored’s diverse customization options for play styles and approaches is certainly a huge part of the reason I’ve played the game nearly a dozen times now. 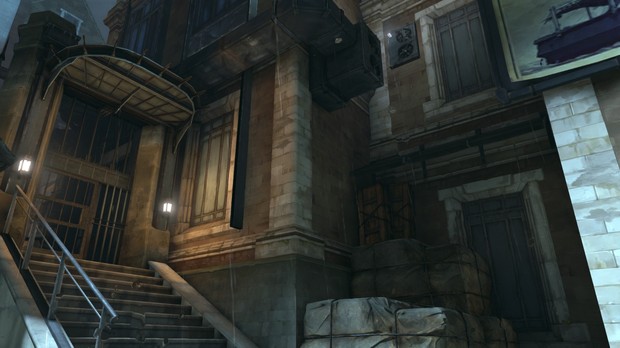 Finally, I’d like to briefly touch on the game’s level design. Each level has it’s assassination target at the end of it. In a sense, this objective is what fulfills Dishonored’s win-state-oriented gameliness, and what frames the player’s activity in the level. However, the levels themselves are incredibly open ended. Not only are there multiple ways of reaching, and then executing that objective, there are also other secondary objectives that can be found. In ‘The Golden Cat’ mission previously mentioned, for example, there are multiple optional areas involved in a subquest that can be done if the player finds Slackjaw, the leader of the Bottle Street Gang.

Dishonored has some of the most nonlinear and open level design I’ve ever had the pleasure of roaming around, pressing me to come back to Dunwall’s alleys, rooftops and abandoned apartments again and again. Combined with the freedom the game gives you in approaching the same areas, each time I’ve returned to the game feels fresh and exciting, unearthing more and more.