October, where didst thou run off to? I hope you're well and warm around a campfire somewhere, telling scary stories with friends. Not like me, November is cold and unforgiving, later we will have to slaughter a giant fat bird that'll peck your eye out if you're not careful. We also have to remember those our ancestor's have wronged. And it all ends with the climax of capitalistic consumerism, aptly named BLACK FRIDAY. I'm scared October, plz come back :(

In case that wasn't dramatic enough for you. It's all over guys. October is done. That means no more excuses to give out candy and get drunk dressed like a superhero. And that also means that my October Spooktacular, where I play a different horror game every week, is no more. I hope it was fun. I thank those who watched the streams and enjoyed being scared along with me. It was good while it lasted, and here's some more on Alien Isolation. 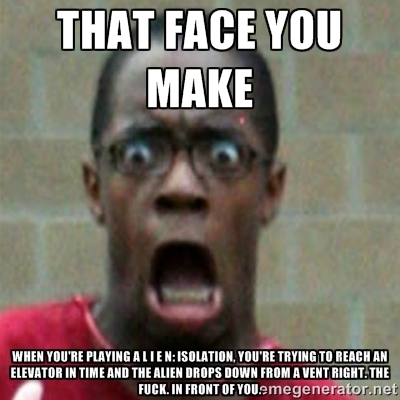 Alien: Isolation was not a game that I expected to be playing going into this. I did get reminded about it through the commenting of Agent9 and got right on buying this game. It went on sale pretty quickly and for a good price so that wasn't an issue. Then Mike let me know on our last PStoid that it was not what I was expecting, this game I mean. So needless to say the gameplay was strange for me. I was expecting an updated version of that old Doom/Wolfenstein-like Aliens/Aliens vs. Predators game. So a shooter. Not the case, in fact far from it. To put it bluntly, this game could be best described as Outlast, but not quite as scary, with a large part of the game that turns into Resident Evil 3: Nemesis. (Isn't that just perfect?)

But despite me, yes, being quite terrified playing this. After about ten chapters I have to come to the conclusion that this is sort of a horror-light game, that is, it's light on the horror but still has its moments. Or my appropriately, it is very atmospheric and here and there the music will cue you in when to be scared/an alien comes out to get you. Well really, the Alien comes out to get you seeing as there's only one alien in this game.

From there we move into the problems the game has. The biggest one is how tedious the game got (in certain parts) which kills the "horror flow" it had going for it. You can see it when I streamed, at one point a viewer and friend helped me get out of a room that was on fire which sent me back and delayed about forty five minutes worth of progress because I got stuck in the area right before the burning room. All because I missed a ladder that was right in my face. When you're in these parts, the game sucks and also the alien is not scary but a nuisance. Something that just comes out and you have to deal with. Precisely like what I said in my third week about Nemesis. The game stops being scary when this happens, the immersion breaks and the curtain rises with all the scary elements becoming stiff puppets all part of the show. I have a theory that when you see something it is immediately less scary, it's actually something we came up with in a creative writing course but I think this works here too. So when the "scary" thing of the game, is coming out in the open every five seconds because you keep dying and need to restart, it is infinitely less scary now.

There were some minor issues as well. Little things like why you can't pick up guns off of enemies that were just shooting at you. There was this one point where "climb" was not functioning and even though I had to run for my life from the Alien, I had to get delayed or take a detour because this one vent was just not having me. Another big sort of problem though is how the story tanks partway through the game and as a result your experience is much less interesting.

Spoiler territory, you have been warned.

I think the protagonist's motivations for shit are weak. Why does Riley choose to put herself at personal risk to save one person that, given how they characterized her, was probably the stupid reason she got injured to begin with? Any sane person would look for medical supplies a little closer, maybe they can be taken off a dead guy somewhere. Not take HUUUUUGE detours through shitvile and then some, all while being shot at and chased by the Alien, to get this bitch her medicine. Oh and where was the fanfare? I expected a motherfucking parae when I got back from that. (Seriously it was the equivalent of going to Ravenholm in Half Life 2 imo) But all I got was a "awesome, put them in this room she's unconscious" AND YOU DON'T HEAR ABOUT THAT AGAIN.

Oh and the biggest turd about that? Yeah I'm gonna say it, she dies at the end anyway. Unfortunately I looked her up and that spoiled it for me. Fucking hell, you go through a nightmare to get her medical supplies and she's just going to die anyway..

Then there's the matter of the Alien. He pops up partway through the game, terrorizes you where you basically have to CQC/stealth past this dude. And then the game sends him off into outer space on an escape pod. This is where I said the game tanks. All of that terror and tension dropped off at about this point and the game becomes Rambo meets Binary Domain because synthetic guys (working joes) are now all you will be faced with. It's pretty dumb if you ask me we could've just ended the game there. 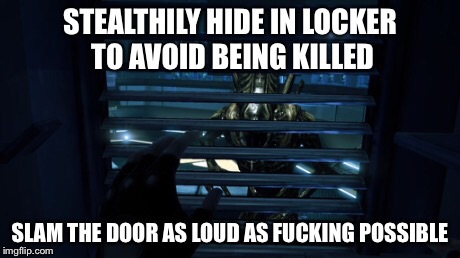 Also like with Nemesis, I did not have enough time to finish this one. I had made it all the way up to thursday, that's five days counting Sunday, and I was just tired. I couldn't go on for a Friday and Saturday was Halloween. So I don't know a full enough experience of this one to give you the skinny. But I will say, in my usual style I want to bitch about a game and then tell you why it's still redeeming of an experience. Isolation is one of these games, thank god. Despite what some flaws, it's still a fantastic game. I think even if I paid full price for it I'd be singing its praises here. It looks gorgeous, the story is (mostly) fantastic, I love the Alien franchise as a result, they filled a game with all these fun knick knacks like the visually pleasing hacking tool and it was awesome to play a triple A Outlast. This is what Colonial Marines should have been and I hope they make a sequel for this one. Overall it's like a solid 8 or 9 in my book.

We won't be getting anything more from this next week sorry. But seeing as I didn't finish Isolation I will continue to stream it to completion. So be on the lookout for that, I'll let everyone know when a new part will be live/posted on my twitch page over twitter so be sure to follow me in this places.