They Bleed Pixels teaches without a classroom 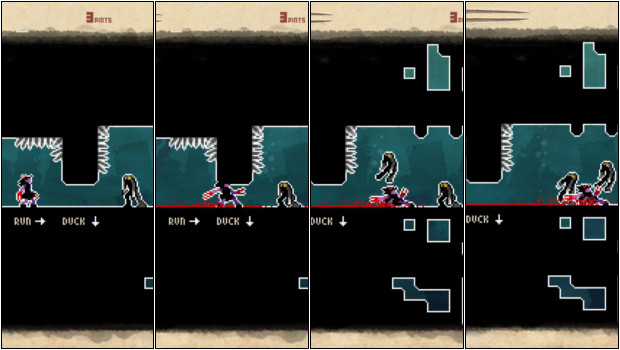 When we run and duck as the wall instructs, we head into a slide that let's us squeak under the overpass and bump the two enemies into the air before stopping. Not only is the slide useful for passing through tight corridors, it can be used as an attack. Again, this lesson was taught without stopping the gameplay and through the use of simple environment text. We don't need a line of dialog explaining the slides offensive capabilities, we witnessed it first-hand.

As games become more complex and further break into the mainstream, the current ideas of a 'tutorial' should be rethought. The days of pausing gameplay to learn new skills and dedicated tutorial zones may be behind us. They Bleed Pixels is just one of many games that dabbles in teaching the player in ways that don't use these stale tropes. The inclusion of a full-blown tutorial, though, implies a lack of faith in its own design. I think that's a shame. The gaming world would be better off treating games more like games, and less like classrooms.
#ShareonCommunityBlogs
Login to vote this up!

I'm a recent graduate of Penn State University with a love of games that dates back to early childhood. In college, I majored in Media Studies and Media Effects to better understand how gaming affects people emotionally and psychologically. Fives years and one degree later, all the answers are at my disposal! Not really, but I like to pretend they are.

I host and produce the Rhythm Authors Podcast, a podcast about Rock Band Network and the RBN authoring company I work for. I'm also the editorial director of PMS Clan and a freelance writer.