Alternate Reality: It's dangerous to go alone! Take this!

10:50 PM on 07.04.2010 (server time)    0
In video games, particularly of the role-playing genre, monsters seem to lurk outside the bounds of every village. With few exceptions, every corner of the world map is populated by everything from mutated animals to mischievous goblins, to enormous fire-breathing dragons. It's a scary world! How's your Average Joe expected to survive in such a place? How are things like trade, farming for resources, colonization, or even long-distance communication supposed to thrive when the average person isn't even experienced or armed enough to leave their homes? 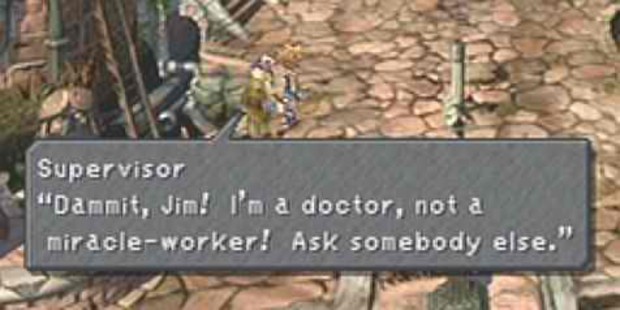 Basically, video games like to place you in worlds with evil creatures that are, for some reason or another, determined to mutilate or eat you. Even the plants are out to get you, and somehow you're expected to survive long enough to save the world. I mean, shit...you're just some guy. Who do they think you are-- Bear Grylls? And the scariest part is, nobody else in the world seems to care that there are giant chimeras outside the city gates. They just want to play cards with you and make vague Star Trek references. This isn't to say that RPGs should be changed, or that this particular aspect of them is unrealistic and stupid-- not at all! I like them exactly the way they are. Just observing that perhaps the societies portrayed in video games are much more well-equipped to handle sudden monster invasions than we are. If such creatures existed en masse in reality the way they do in the RPGs we know and love, you might find the world would be a much less laid back place.
#Community    #OpinionEditorial
Login to vote this up!