How to be a simracer and father without too much clutter.

As some of you know, I'll be a father soon. I've been a fan of racing games for years, but really became an avid fan of simracers over the last few years. This requires a wheel + seat for the best experience. So far I've built 3 "rigs", 2 of them were basically just plywood contraptions to keep a wheel and racing-seat from a GOLF2 together, the last one of those was in my gameroom: 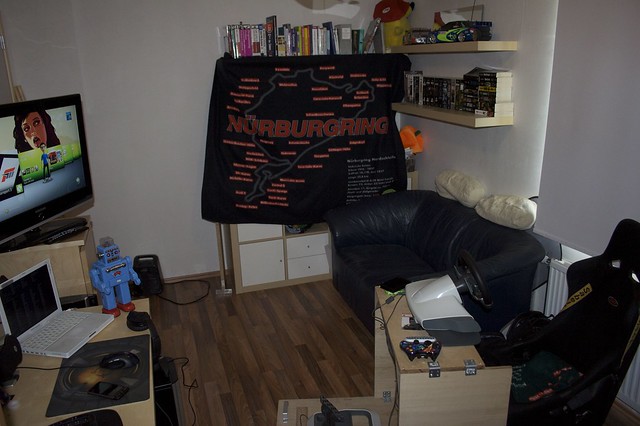 Seat + book-cupboard by Van Loon Johan, on Flickr
Full set of pics for my gameroom

We just have a 2 bedroom-apartment, so when my wife got pregnant, my gamerooms days were numbered, so I had to find a solution and quick! Luckily, my wife is very supportive of my gaming-quirks, however putting that racingseat in the living room was simply out of the question, for one it looks hideous, takes up a shitload of space and it would mess up our otherwise nice and clean living room. So how to have a racing-setup in the living room without making it look like a mess?

The first part of the solution was the birthdaygift my wife gave me in february, the Fanatec Rennsport Wheelstand, she suggested I store it in the bed room and just to grab it if I wanted it. The PC would be on it's 'old' Ikea-Desk that was in the gameroom... HOWEVER... I've grown up in a carpenter family ( father & youngest brother are carpenters ) so I know my way around a woodshop. I decided to build my own custom desk.

Designing it took a little longer then planned as I had to wait 3 months for the wheelstand to arrive, but after that it all went great :-)

So here's my home-built racing desk:

When it's closed, it's just a nice and clean-looking desk. 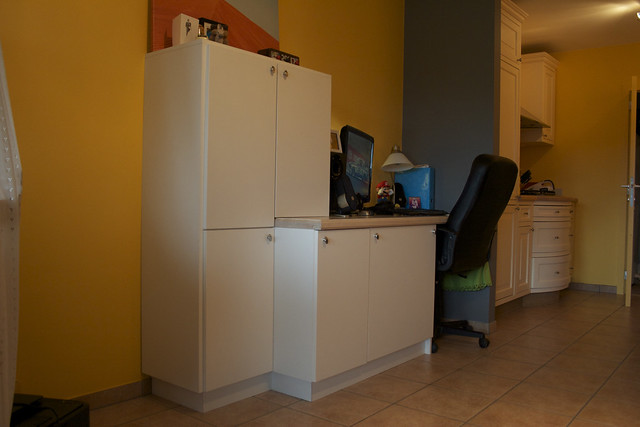 desk as a real desk. by Van Loon Johan, on Flickr

And then the magic starts happening ( takes about 5 minutes to set up completely ): 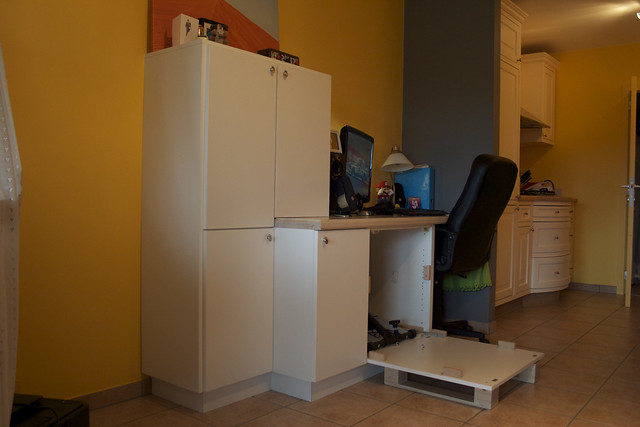 After the panel is secured, we start setting up the wheelstand: 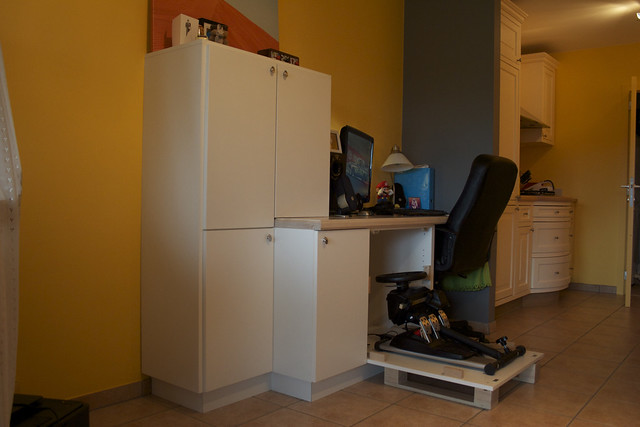 wheelstand is ready to go back in: 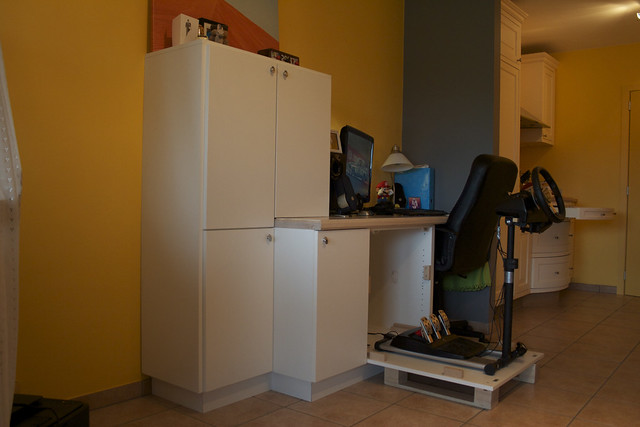 add a chair from the table: 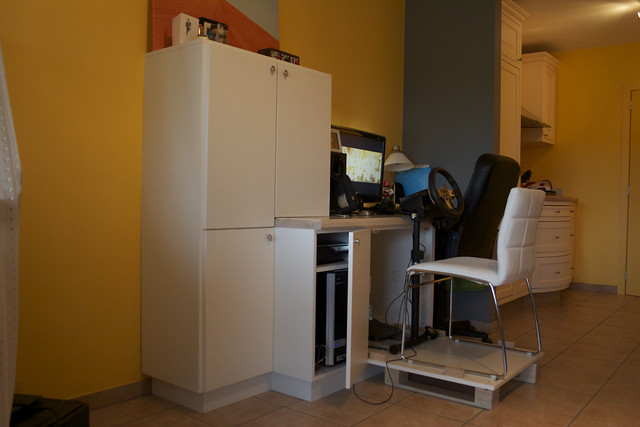 ready to race by Van Loon Johan, on Flickr 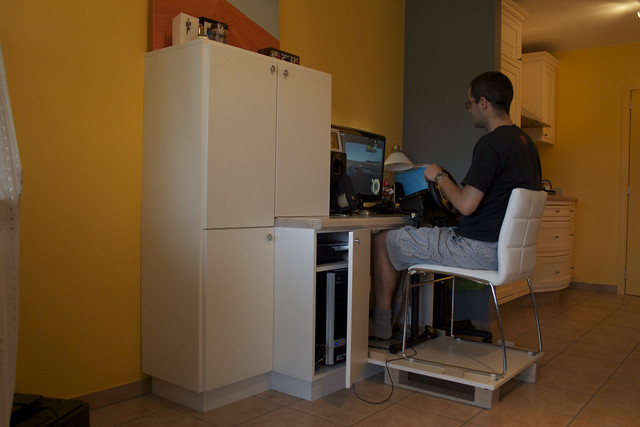 racing on the desk by Van Loon Johan, on Flickr

lots of possibilities with 3 different systems in the cupboard: 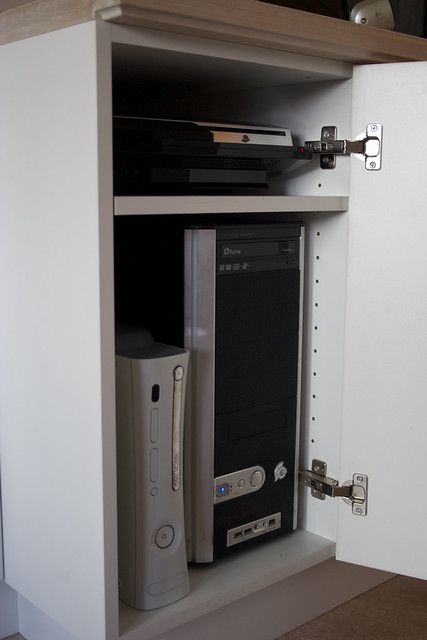 all the crap back in the box (not the gigabitswitch on the side): 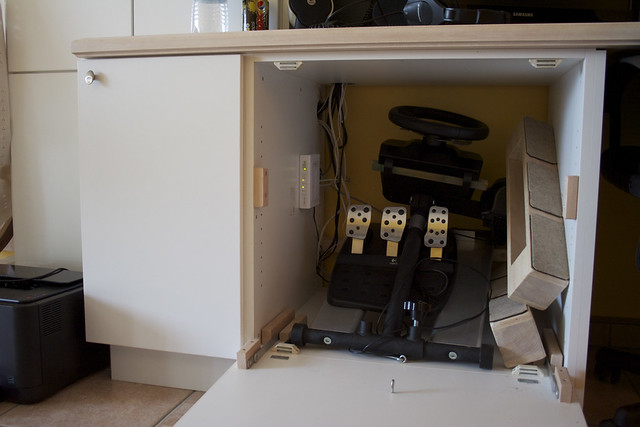 all tucked away by Van Loon Johan, on Flickr 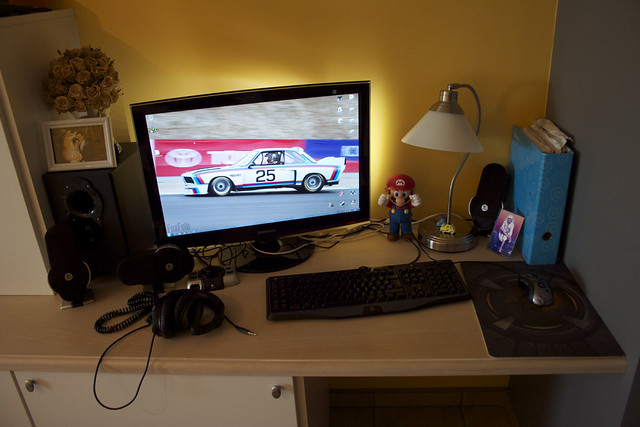 Desk in it's 'normal' state by Van Loon Johan, on Flickr