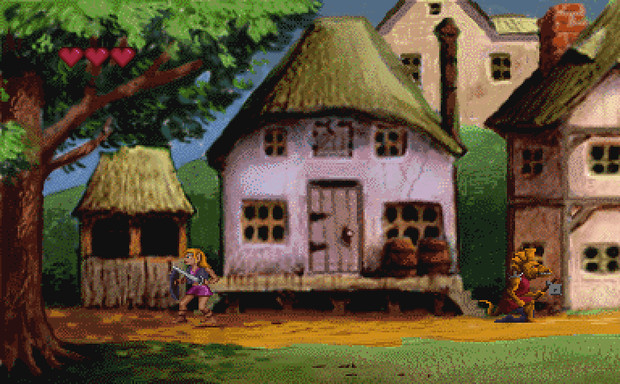 However at the time, I only knew that a game series which had brought me joy ever since the first Legend of Zelda game had now nearly brought me to tears with frustration and regret. Even Wand of Gamelon and Faces of Evil, while better than Zelda's Adventure, just didn't strike the exciting Zelda spark.

Mere hours after I'd purchased the system, I'd packed it back into my closet. It would be years before I unearthed them while moving out of my parent's home, and multiple moves beyond that one before I finally hooked the console back up and given them a fair shake.

These days, objectively speaking, Wand of Gamelon and Faces of Evil don't strike me as terrible. Quirky titles, yes, and certainly the controls could be tighter, but going back to them with the breadth of gaming experience and the patience of an adult, they're certainly less terrible than my horrified teenage brain remembers them being. They've got some interesting design choices, and as long as you don't go into them expecting a Zelda-quality title, they're not entirely horrific. I've certainly endured worse titles.

However, even with all the joy the series has brought me, a new Zelda title sends a completely unwarranted shiver of horror through my frame. Objectively speaking, I know that Nintendo could never produce a title half as bad as Zelda's Adventure. Objectively speaking, I know that no system produced by Nintendo will ever give a game controls as poor as Wand of Gamelon and Faces of Evil possess.

Yet nothing can erase the memories of having purchased the Unholy Triforce. Nothing.
#OpinionEditorial
Login to vote this up!