Improvements: I've got ideas, too!

I know not everything can be promoted. I know that sometimes, there's just a lot of crap on the Cblogs which isn't worth Cblog watchers reading, let alone promoting to the main page. But on the other hand, sometimes you have slow News days (like today: 19 stories since 4:00 A.M.) and there is good content in the Cblogs which is fairly recent.

Blindfire's essay on Multiple Choice Protagonists, posted about an hour ago? Worth reading. Debatetoid? Generally worth reading AND a good way to generate discussion. Sephiroth and Andyman both wrote some pretty compelling counterpoints to the preview of DmC about why fans of the series up until now are concerned and went into detail for those who might not be fans, for example. I'm sure I could go back through the Cblogs and pull more.

More importantly, there's a reason I don't write more and a few others who, when they contribute, generally get promoted blogs probably don't write more: They don't feel that their stuff will get promoted, and whatever they've spent an hour or two writing is going to get passed over and maybe read by ten or twenty people. When the stuff you've just written doesn't get read and gets ignored, it dials down the eagerness to write more.

It works out great for both parties: Destructoid gets more content for the readers for slow news days, and the readers participate more in the community. It's a win/win for all involved.

I'm sure everybody else is going to beat you over the head with this, but let me just add this: Make the Cblogs and every other part of your site look like everything else. It'd also be nice if you could unify the forum/site logins, too. Fuck, Jim has a rant about how annoying it is to have one log on for everything, and you guys have TWO for a single site.

Plus, it might get the Cblog and Forum crews to integrate with one another a little more. More forum participation AND more Cblogs being written would be A Good Thing.

Moar Shit Set to Off by Default

Full disclosure: My computer is apparently a THREE Ghz processor with THREE gigs of RAM. That makes this even more relevant, because I mean, god damn.

Destructoid, my computer at work is not the latest model. It doesn't have a video card, but it does have two gigs of RAM and is running Windows XP Professional SP3 on a 2 Ghz processor. Do you know what happens when I log in with my work computer? It starts stuttering, even when the only other tab I've got is my work email.

This is not a good thing. Especially when what's causing it is the Destructoid Chat, which I'm not using. Which, if the population of available chat rooms is any indication, only 5% of your users are using. (5% = 20 people in Outer Heaven and nearly 400 users online). And having to maximize the chat (making my computer slow the fuck down even more?) before I can even turn the thing off? If I can because it's making my computer slow to a crawl? That's some bullshit right there.

Hell, checking the chat just now slowed down my laptop a bit. My laptop can run the source engine with no problem. I've got Team Fortress 2 installed right now, and it plays fine. YOUR SITE SHOULD NOT HAVE HIGHER REQUIREMENTS THAN A GOD-DAMNED VIDEO GAME.

I don't just say this for my sake, but for yours as well: If I'm stuttering, it's because I'm receiving a shit-ton of data from you. I know that websites require money to run, so save some of it by not freaking logging me in to the chat. I'm certain your bills would take a noticeable downturn if you did this.

Destructoid, that twenty story link thing you have at the top? I ignore that. If you must keep it, I'd suggest that you might want to stick it over to the side, on the sidebar. Right now it just means that whenever I come here, instead of seeing your new stories, here's what I'm seeing: 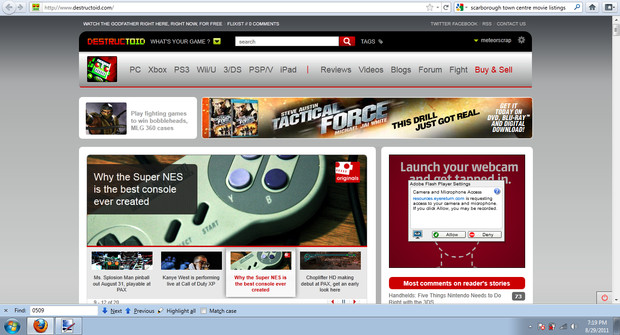 Destructoid, my webdesign teacher would viciously beat, with his fists, any student that submitted a site which featured all new content "under the fold", which means anything you have to scroll to see. Even the biggest resolutions would only see the title and header image of the top story.

Right now there's a LOT of wasted real estate in the main page. It'd be nice if that changed. Likewise, I'm pretty sure nobody uses the Top Comments on Reader Stories portion of the Sidebar. Why not chuck it the fuck out, stick a revitalized version of the 20-stories thing there, and then get back some real estate while getting rid of something nobody uses?

I'm not going to touch on Jim Sterling's review practices, because frankly speaking, I agree with them. However, it'd be nice if more than one person took a look at new games, where feasible. It might be a dissenting opinion, it might not, but it's another way to offer more insight on the product in question.

Okay, this Cblogs wanted thing? That's cool and all. I like it. It gives me something to focus on.

But how's about you pick a random staffer each week, thrust a finger at them, and yell: "Write about this topic!" in a rather dramatic tone? Or just shoot them an email and say they need to submit a 800-1500 word article on the topic.

It'd be nice to get an opinion on something like this from the other end of the fence. I'm sure Dale would have had something interesting to say about Handhelds given his fixation on the PSP, or Holmes could have had thoughts on the Downloadables topic.

Or perhaps even contact individuals outside of Destructoid for a guest feature? Not other journalists, but voice actors, developers, game writers, etc.
Login to vote this up!