I don't usually PC game outside of the occasional free pc game that pops up. I don't have a problem with PC games, I just get too distracted with the internet and other things on my computer to focus on PC gaming. When I heard of Recettear's free demo, I figured it couldn't hurt to give it a whirl.

And I think I'm in love. With a demo none-the-less.

Recettear is about a girl, abandoned by her adventure loving father and forced to work for her livelihood. The local loan shark follows her around threatening her with an escalating bill lest she find some way to earn her meal. With a bit of spare change and some kindness she is able to get a small mom and pop shop started in a desperate hope of turning 1,000 pix (Recettear money) into 10,000 pix in 8 days to make the first loan payment. Failure to make the loan payment will result in this poor girl losing everything except the cardboard box she has to live under.

Ok, maybe its not that morbid. In fact, it's quite the opposite. A fun loving tale that really highlights what life as an entrepreneur is like. In fact, I enjoyed how this is all presented as a fun story about how a loan officer and a random orphan start a business together to become the next Carnegie or Rockefeller. 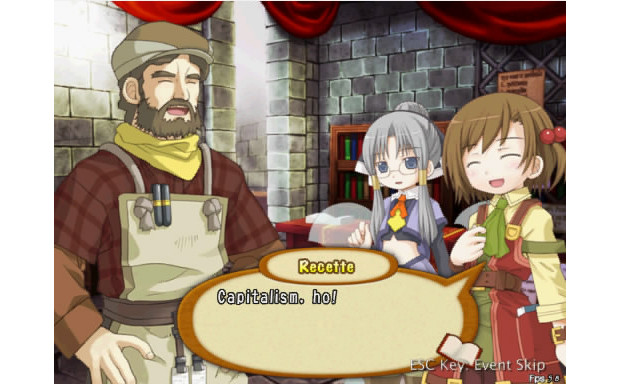 This can usually be overheard from my office before the workday begins.

If you've ever worked a shop where you are in charge of both purchasing and working the counter, this game is fairly accurate in what it does. I've worked in a family owned small business all my life. I'm fairly amazed at how accurate this really is. Like business 101 without the tedious accounting.

They explain in the beginning that items need a set standard markup for the store to break even. This is true. 100% true. You have to work off a set standard otherwise you can not pay your overhead. In the first walkthrough, they tell you its 30% markup. I tend to work off 35% in real life. You can go back and forth on which item should be 40% and which should be 30%, but you can't run a small business charging list (usually 50% markup). Only the ignorant will buy from you at that price point and the customers you have will leave and forget you.

Anybody who has been in debt can tell you that the next big feature of the game is especially true. Time management is the thing that makes and breaks check books. In Recettear, you only have 4 quarters of a day to run around and get what you need to. Adventuring (which we'll get to later) takes 1/2 a day, and shopping takes 1/4 of a day. The markets aren't open at night and you have to rest to get to work in the morning so that limits the time you can actually do things. I've also noticed that most customers come in the morning (very similar to real life in my job) so you have to make sure you are either stocked well early on, or you will struggle to make the final sales.

The last thing I love the most about this game is that the customers have actual personalities. The lumberjack will only buy weapons or armor. The everyday man will only buy clothing or food for his wife. The wives will buy many different things, but they'll haggle you just because they think they can. The adventurers are friends in the industry so they will come to you wanting some help. If you help them they'll help you in your Adventuring which works out for everyone.

Those were the normal characters. The final two are the most aggravatingly realistic. The elderly men come in two forms: Rich man and poor man. The rich old guy is the one you want to buy that 3,000 pix back scratcher that nobody seems to look at. The poor old guy will haggle you like his social security check is running late in the mail. If you don't satisfy him he'll leave shouting "Madness!"

Lastly is the poor little girls. Oh, how I hate them so. Their real life counterparts are the people who only look for deals on items and then get angry that you don't sell it for only 10-20% markup. You and I know these people when we see them. Heck, you and I might be these people. They are the people that make working retail hard. You try to work with them. They ask for a slightly lower price and you oblige by giving them a good deal at 22% markup after coming down from 35%. They then insult you for not going lower. You try the next girl by starting at 28% markup and going down to 20%, and the same results.

This is very close to real life. You have your good customers: the everyman, the adventurer and the lumberjack. The decent customers: the housewife and the old man (depending on which meds he's taken). And finally the aggravating customer: the little girls who test you even on the best of days. 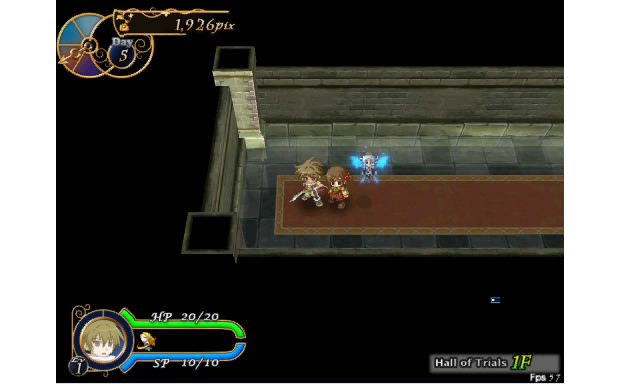 Time to get my grind on

In general my favorite games are the ones that aren't afraid to mix and match. If I get bored with a game element, I want something else to do. Recettear actually has a mini Shiren style dungeon crawler inside of it. It's nowhere near as complex as a Shiren game, but that's the point. This isn't a complex dungeon crawler. This is a complex business 101 class. Adventuring has a risk reward aspect to it as it kills time that could be made earning money. To add on to that is the fact that if you die, you can only take one item from the dungeon. While that one item might be good, you could have also made that money buying and selling product.

It's a really fun system as the difficulty isn't really there, its just your low level adventurer can't survive the attacks from bigger opponents early on in the game. That's why you have to leverage some good deals so that in return he'll get far enough to get out of the dungeon, or at the very least he'll bring back a higher level item. I love that this represents so many things. First, he's a customer that will keep coming back due to loyalty. He'll always be demanding new equipment as you'll always be needing higher level product. Secondly, he represents an outside agent trying to bring in new deals as you discount product for his services. Finally, he represents a character in the same place as you that isn't in the same situation. In business you'll come across a lot of contacts that might not be the best customers, but they are people to share experiences with or even in some cases warn of possible dangers.

The only real conclusion is that Adventuring has to be done early in the week so that you have time to turn around and push the product you've found. If you do it too late, there isn't any chance of selling the product before the next billing cycle. If it's a tight month, you might be out in a box. So spending and time management is a crucial deal.

I guess what's left is to say what I'm expecting from this. All the above is what I got from a measly 5% of the game. From the trailer above we can see more interaction with the bar and a deeper battle system with new adventurers. The demo hints at ingredients which means an item fusion system. The appearance of a rival business should make for some really intriguing strategy elements as well.

This demo really hints at lots of things to come. An advance ordering system pops up at level 7 which is probably one of the things I really hearken back to my own experience. Early on in the demo we get a chance to start taking simple orders like food and armor from customers. Sometimes its specific and you just don't have the stock for the consumer. In my business we have thousands of different items that we just can't always match the demand for. Instead of turning customers away, we have to order in for them. Most businesses have this and in the beginning when I first couldn't place the order I really felt bad that I had to turn a way a few customers because I couldn't match their demand. This shows how small the business is in the beginning and how little consumer faith you have.

The last thing I really like is that you can customize the store. I don't know how much you can customize it, but I like that I can change from simple wood flooring to carpeting or even cobble stones. Buildings have to be maintained constantly otherwise they start to feel dated. When you are trying to sell someone something, its best to attract them to fresh things. A new set of wallpaper can do that. I can't wait to see how deep the system really is.

The focus on the layout of the store is fantastic as there are hot corners and dead corners in every store. The stuff you want to move or show off goes near the window while a guaranteed sale or just cheaper product gets shuffled to the sides. As someone who has to work the showroom a lot, this small little gameplay element is welcome.

Finally I'd like to talk about the pawn shop element to the game. I rarely have to deal with customers trading in things, let alone chocolate bars like in this game. I can't vouch from experience, but I'm pretty sure this is how Game Stop does it. While Game Stop will probably offer you 20% of an item and Recettear tells you to offer 40-60% off of cost for the items, its pretty much the same system. I remember selling a Thankful Statue for 3,000 pix while only paying about 900 pix for it. It felt a bit dirty. Maybe that's just me. It sure helped me make my payment though. 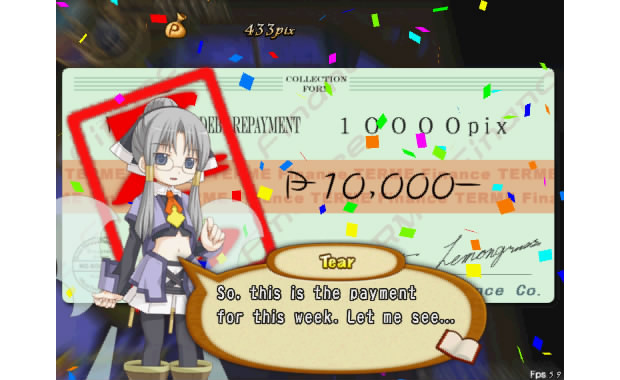 I honestly believe that this type of game could very well be marketed to the "casual" gamers, but they'd have to remove the great characters and turn all the shoppers into facebook friends. I would never play it then, but it could be marketable. Maybe I'm just jaded by my friends and family mindlessly clicking away at Farmville, but I appreciate a story and a goal in these little repetitive style "casual" games. Oh yeah, they'd have to kill the JRPG stuff to.

It's a good game that everyone should give a demo. Heck, it might be one of the first PC games I've bought in a long while. That's saying something.