Stuff...but more importantly, thanks Dtoid for the Switch

Man, I am really slow at getting thank you letters out. That being said, I want to thank the fine publisher of Slam Land, it's developers and the good people here at Destructoid who saved me some bacon when I entered a random contest on a Monday when I should have been working. Really this is a testament to how any poor shmuck can over come the odds and win something nice for his kid.

So from the bottom of my heart, I want to thank Wes and whoever else saved me $300 on buying this new fangled Nintendo console because I made some promises that I was going to have to keep. See, my kid has had a rough go of writing lately. She was moved out of the established 2nd grade class due to class size and put into one headed by a substitute who got promoted to the big leagues. New teach was a nice guy, but her writing suffered and I was too focused on her math.

The next year came around and we did some basic writing excercises throughout the year, but ultimately she's stuck being great at math but has really sloppy handwriting. So, that's what we spent this past summer working on. The prize for being especially studious was a brand new Switch like her best friend has. So we worked. Filled out an entire work book. As school was starting up, it looked like it was now time to go shopping and I went looking for reviews on my old favorite gaming site.

That's when I saw a contest for a Switch sponsored by Slam Land. Obviously I laughed to myself how easy that would be. I mean the only thing I had to do was "comment below with the dumbest thing you've ever slammed into the ground." So I just pulled up a random memory from my childhood and well this exchange happened: 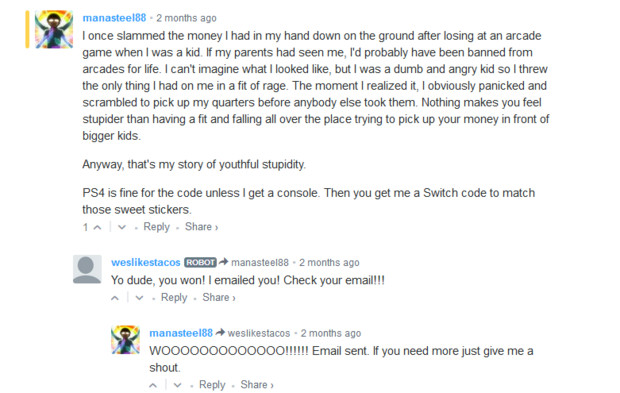 Looking back it seems obvious that I was a stupid and angry kid growing up. Never would have thought that I'd have gotten a reward for that stupidity 20+ years later, but I guess life works in mysterious ways. What I want to make clear in that story is that I didn't actually succeed in picking up all my money. Outside of the embarassment of the situation, that might be the reason I remember it the most.

I've discussed on here how I grew up in Mississippi with the massive arcades the ｃａｓｉｎｏｓ used to offer. Well back then I used to be obsessed with fighting games. Don't get me wrong, I was terrible at them (and to be honest still am). That however was where the hottest games were. I of course would hang around and play cabinets that don't usually have people around them like Virtua Fighter, but you had to be a trust fund kid to actually play those games more than once. The side effect was that there usually wasn't anybody regularly hanging around to fight against and if you actually lost a match, you really had to reconsider asking your parents to mortgage the house just to afford a rematch.

Mortal Kombat II however was where I lost my cool and my money. That's the cabinet the older kids hung in front of. So I decided to stand in line and eventually got a chance to play that day. I was destroyed. In front of these teenagers I went to the back of the line to try again and then made my way back to the front again only to get perfected by a Kung Lao player. That's when the money went flying and so did my pride.

So that's my embarassing story about how I was once a moron and how it netted my family a sweet new Switch. The skin they used is absolutely ridiculous and my kid feels like a bad ass showing off the console to her friends. Sure her friend might also have a Switch, but she doesn't have one with creepy spiders and carrots on it.

That's a win in my book, so thanks robot overlord for supplying me with this hot Nintendo console in a time where I really needed one. So remember dear reader, even you can win some free stuff so make sure to enter as many of these things as you can and make it harder for Wes to do his job.