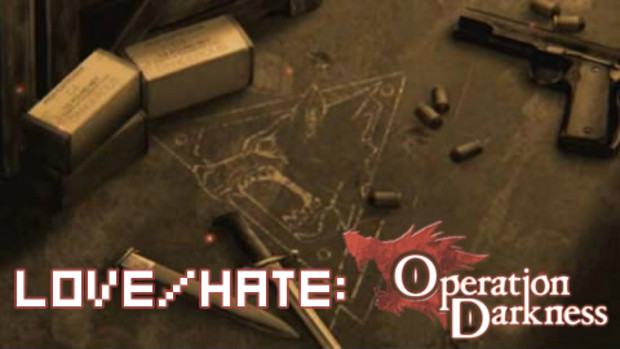 I've been told that Operation Darkness is not a good game. Currently it sits at an aggregate score of 49 on Metacritic with the lowest score being given by Official Xbox Magazine at 2.0/10. IGN gave it a 2.5/10 in a fairly amateurish review (and people complain about Jim Sterling). I'd like to say "screw those guys, they're wrong," but I can't. Not completely. They are right, this by no means should be a good game. Yet, I keep popping the game in to play the same levels over and over.

Since this month's theme is "Love/Hate" I kinda wanted to defend a game that truly deserves a lot of the things said about it. What better than a WWII SRPG with werewolves fighting Nazi vampires. Yeah. The story plays out like a history book with the lead character getting wounded in battle and getting a blood transfusion from James Gallant the leader of the Wolf Pack (and also a werewolf). Along with James you go and participate in nearly every major battle taught in history classes about World War II. I wouldn't recommend playing this with Grandpa, but it is a fun take on a war that has become almost over saturated with games. You can see what I'm talking about in the intro.

On paper this should be easy to explain, but explaining Strategy RPGs is pretty hard. The genre tends to load on too many variables to differentiate itself from its arguably simple system. I guess the best way is to describe the game through one frustrating scenario I faced to showcase how it works.

Mission 11 in the game starts with an old reel presentation explaining some of the history of the Nazi occupation of France and how your characters will bring about the liberation of France. You meet up for the 2nd time a young resistance leader named Leona who has haphazardly led you into an ambush. Thus the battle starts. You're allowed 9 members on the field and NPC Leona (who is completely useless). Of the 9 members, Leona and 4 main members cannot die. Death is a bit unusual in this game. I like to think that Operation Darkness handles death like a cross between Fire Emblem and Final Fantasy Tactics. Fire Emblem's method of death being to permanently kill off a character whenever they happen to die making for a more realistic battle, which tends to be an obsessive compulsive's nightmare. Final Fantasy Tactics allows you to use magic and items to bring back characters within a certain time frame. That was more characteristic with its fantasy RPG roots.

The way Operation Darkness handles this is when a certain party member dies (like the main character) its an automatic game over. To add to the difficulty of this is the fact that multiple units in the party are always subjected to this rule. The other slightly more expendable members can die, you'll just lose them if you don't resurrect them. The tricky part is that only one member of your party, Herbert East, has the ability to bring them back to life with magic. This ability only became unlocked after a few too many battles that left you praying that none of the key members died due to a mistake. And there are plenty of easy mistakes to be made. He's also extremely hard to keep level with the rest of the party as he's slow and weak, but a necessity to every battle. 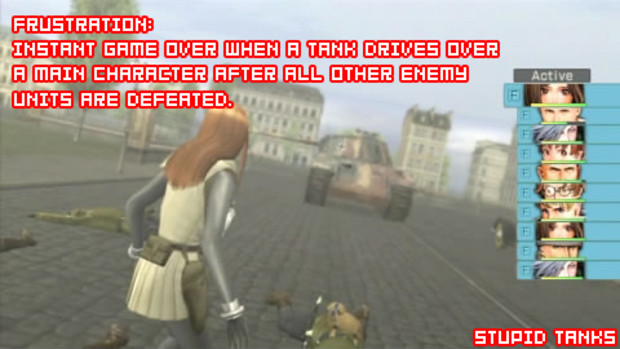 This game system is helped by a single skill, Auto-Restoration which allows you to heal yourself with Medical Kits that act the same way Potions do in any Final Fantasy. The only problems are that if you get run over by a tank you can't auto-restore. If a tank runs over a main character its instant game over. You can also only carry 4 items at a time per character causing you to manage yourself conservatively or hunt the corpses of other soldiers in hopes that somebody has a potion.

In Mission 11 you face off against 3 tanks placed on all the corners of the map to surround you. Add a group of about 12-15 troops with long range magic and you have 18 enemies with long range capabilities to attack your 9 troops. They are all led by a certain busty vampire boss that tends to be slow, but packs a mean punch.

So overall you have to have at least 3 bazookas to take down the tanks quickly. The problem is that bazookas weigh you down slowing your characters dramatically. The prior Mission brought in Van Helsing (a busty vampire killer to hunt busty vampires?) which brought in speed to the equation to go with a knife utilizing Jack the Ripper allowing them some speed to give you have two or 3 characters take up the bazooka role, but the tanks unfortunately get the first move usually forcing one or more of the characters to burn through a potion.

So you utilize the faster units with blades to take out some of the regular units hoping that they don't get taken down. And use the slower units with guns to get close enough to take down some of the outside units and two of the tanks (one of which is on the far corner of the map away from you), hoping 1 of the 4 essential units and Herbert don't die or burn through their potions (and they will burn through them). If you are then successful in taking out a good percentage of those units, all of a sudden 9 or so skeletons will pop out of the ground near the two most advantagous points where you're characters were placed to take out the tanks and other units. 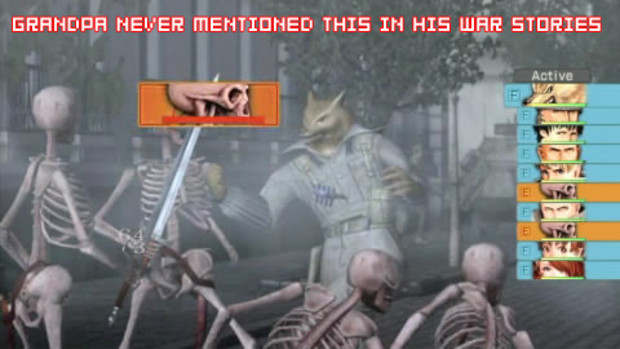 The tricky thing about skeletons is that guns don't work on them and neither do the regular grenades. Only blades, bazookas and heavy grenades work. Skeletons also come equipped with only swords making them light and fast with a heavy attack that is paired with a long range magic attack. So Jack Skellington wanna-bes then swarm all over where your troops are and you can hopefully kill all of them before they eat away at your potions or kill one of the essential characters.

Finally after all you manage to defeat all of these characters, the boss will run away and you get a nice little cut scene of Leona getting shot.

I brought this level up because it characterizes everything wrong with Operation Darkness. Pre-battle you have no idea what you are going into and even in the middle of battle there is no way to determine there will be skeletons, and where they will be placed. Which creates a type of monster closet effect when they appear out of nowhere and happen to surround one of your units. The first time I played the level Jude (one of the main characters), full health but no potions, was located right in the center of 5 skeletons. He died. Game over.

Second time, I got James Gallant close enough to shoot a tank with a bazooka. One hit took half of the tank's life, and then it ran him over. The third and fourth times the AI focused on one of the main characters and they died in a gun fight. Fifth time Herbert died at the end of the battle with only one enemy AI left forcing me to reset. The sixth time I finally beat the level.

That's six different play throughs of the level. Mind you these levels aren't short. It takes about an hour or so to play it. Six hours in some FPS's is the entire game. I spent six hours trying to play through one level. This is the same game that RPG Fan says "isn't so bad as to be unplayable, but it gives no motivation for the completion of more than a few hours of play."

So where is the love? The game isn't your next magnum opus, but it is a very interesting game to play through. This game is also one of those things you have to figure out how to play. Maybe people have had their hand held by game designers, but once I figured out how to change the map and select characters with the triggers, I had no problems at all with the camera. In fact I kinda liked that it let me swing around almost anywhere with my character. I mean really, they give you a map so you won't get lost. 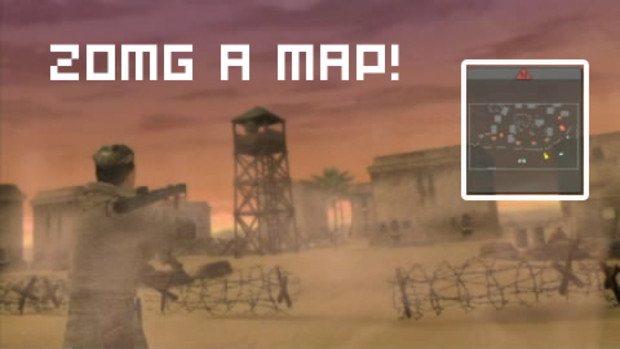 The graphics were a big question for many people, but it is an SRPG and a lot of new IP SRPGs have had bad graphics. Disgaea in particular had some jaggy looking sprites that I never noticed until somebody pointed it out to me. I guess people get hung up on that sort of thing. It looks a hell of a lot better than Spectral Force 3.

Atlus also did a pretty good job with the voice actors, with only a few rare rough spots. Mission 11 in particular has a really cheesy line when Leona dies. Jude runs over, holds her and screams "NOOOO LEONA! *dramatic pause* SHE WAS ONLY 17!" and I couldn't stop laughing at it. Not in a bad way, but in a kinda "you were almost a Jill Sandwich" way. The voice acting throughout isn't Oscar caliber, but anybody going into a game with Nazi skeletons thinking it was going to be is out of their minds. What we get however is pretty top notch voice acting delivered through visual novel type talk scenes.

The best feature is the reel clips from the war. It adds to the game by giving a history channel-esque presentation that lets the supernatural aspects be a progression to learning some bits and pieces about the war. They are really well done and I like to think that I actually learned a bit while playing Operation Darkness.

I kinda had to learn a lot for Operation Darkness since the game forces you to think of new strategies for each battle. The random nature of each mission assures that there will be a new way to die presented at every turn. I guess I just haven't really played a type of game in a while that didn't immediately tell me how to approach everything. I just started playing Final Fantasy Tactics Advance 2 and I realized how different it is when the unplanned death of one character will change how you approach each level. It kinda brings me back to the NES days of figuring out how things work to get to the next point.

I wouldn't recommend Operation Darkness to just anyone. I couldn't even recommend the demo since it just throws you into battle without teaching about the Auto-Restoration skill or how it works. I will however defend that it was a worthwhile game for a system that had no Strategy games on it.