Groundhog Day: Stuck in a Book 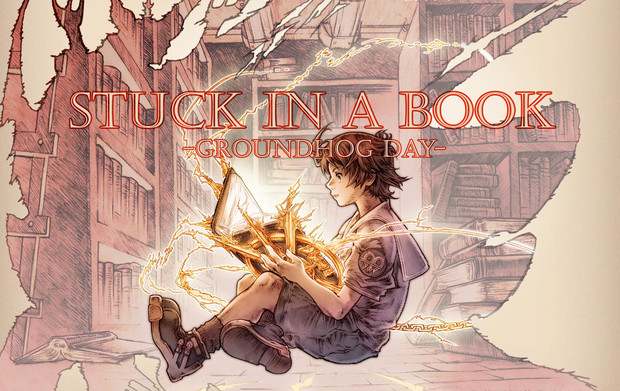 I have a terrible reading memory, which is probably why I've stuck to blogging like I have. When I read at length, I tend to prioritize some fact points and disregard others. I romanticize some moments and even create some points that just didn't happen like they were supposed to. I suppose that's why I've always loved comic books and video games as it restrains my thoughts in to a medium that requires both imagination and actualization of imagery to push the ideas across.

I'm not referring to this as something that's debilitating like reading comprehension issues which removes understanding of the materials, just something that I have done on a few occasions to tweak a story in to how I would tell it. From what I've noticed, it's changed a key scene in the Watchmen, parts of Final Fantasy VII and even bits of Gatsby as well for me. There are lots of games I know that have gripping stories that I could go on and on about, but because of where my mind wanders to, it might not be the exact experience you all remember. Thing is, I know my version of the story is better.

I say this because my favorite video games have based their entire franchise around books. Well more to the point, based on what the characters in said games have found in books. Final Fantasy Tactics in its many iterations defines what I look for in games. I have hundreds of hours invested in to each iteration in the series and I could invest another 100 easily. It is a series that many feel gets progressively worse as the teams responsible begin to focus less and less on the depth of story that the original nailed perfectly. I disagree.

Honestly, the first thing I can think of that makes a game in to something that you have to revisit over and over is gameplay. I've never been one of those types that can listen to records like Dark Side of the Moon over and over again. Eventually I grow tired of it. Likewise with movies, I just can't be expected to react to a movie the same way after watching it 12 times. A story can only be so good before you just feel a lackluster need to stop replaying it. This effect is essentially delayed when playing most video games and Tactics is an expert in replicating this.

Final Fantasy Tactics holds you to a job system that is for all extents and purposes, perfect. There are crappy jobs, overpowered special characters and exploits abound for the game, but the idea of marching through these battles as an ever evolving militia is brilliant. Taking it's cue from Final Fantasy III and V, Tactics allows you to have 19 primary jobs with another job acting as a secondary attribute. That's over 300 variables applied with each unit you fight with. This doesn't factor in monsters or special units as well.

Final Fantasy Tactics Advance breaks the complexity of this system by creating creature classes. So now Moogles and Humans each have a different set of abilities with some jobs interweaving between the races. While it waters down the beauty of Final Fantasy Tactics' depth, it still creates a focus on what your characters should be building themselves up as. Pair this with a world that you create for yourself and you've got a system of customization that is different every time you restart the game.

Final Fantasy Tactics A2 expands upon the previous job classes with two new races and proceeds to tweak them all so that they have a better execution. The pub system that has been utilized for modest side missions up until now is greatly improved upon. This is actually where the game really happens as the main storyline is beyond simple. Twists on simple events like finding a cure for the pink zombie Frimelda, showcase why this system is so much more than just the average tactics based gameplay. It's depth in different events practically forces you to explore the many different side missions in game.

The original Final Fantasy Tactics has been constantly called on for its complex story. I've always been stuck wondering why it's been considered this way. For all extents and purposes the games central plot line is typical of Mario and Sonic. Save princesses and collect jewels. Sure the characters in game talk about political events that shape the world into a rich landscape to understand, but there isn't anything complicated about what the game wants you to do.

You as Ramza Beoulve must run through the game stopping the corrupt at every turn as they pervert the Germonik Scriptures to their own will. The first chapter sets up the reason why you are doing this, and the rest is about how you have to fight corrupt official after corrupt official while trying to do the best you can to stop these people from ripping the world apart.

Everything else in the story is a delicious icing on top of an already wonderful cake. This is punctuated with the job system that allows the runt of the litter that is Ramza to build the strength of his army against infinitely more powerful men. Like many Squaresoft titles around this period, this lends a replayability on two fronts. Tactics is replayable both on its gameplay and strong story telling elements.

When Final Fantasy Tactics Advance came out, it had a hard time living up to its predecessor. It was built for handheld play and its complex story was streamlined for an all ages audience. This however does not mean it was just some casual tale. As the new kid in town, you and a group of new friends pick up a book that sends the four of you to a fantastic new world. Each of your new friends has their own personal demons that they face in the real world and the fantasy realm gives them all a place that they can overcome these issues.

That is until you come in and force them all out of this paradise. A plotline like this is deep enough to lend a great deal of thought, but it's too subtle in the way it comes forward. It unfortunately just sits on the sideline. A good story to come back to, but not as gripping as the first. Though, it is interesting to see a world built by your own imagination be subsequently destroyed by your actions.

Grimoire of the Rift, the final game in the series, lends you its world as a playground. You have a large number of missions set around a simplistic story in which you stumble across a clan and in turn, lead them through an adventure that eventually gets you out of the storybook world. If the Gameboy Advance story was considered simple for some, this one takes the cake.

You are just a boy stuck in a world that is a lot of fun to play with. That's all. The gameplay is tweaked for better and worse, however the numerous missions of different varieties is what gives you plenty of room to build your characters up. Paired with an item synthesis and item learning system, the game forces you to grind to get to where you would want your characters to be.

Tactics for me represents a world I can always come back to. The story, the characters and the rich system will always be there for me. It will always be there and I will always return to it. Alazlam Durai's historic recount of his ancestor is brilliant and addictive. I only spend about 40 hours each go around, but the hundreds of hours I've spent on this game is through constant visitations. I will keep rereading this story over and over for as long as I can simply because I get something new that I didn't quite get each time I visit it.

Tactics Advance represents a game I can never leave. The story doesn't propel me to send a boy back to his wheelchair, nor another to his disappointment of a father. So I grind. At 110 hours, I have no idea where the story wants to take me anymore and I'm okay with that. It's a game that I'm mastering instead of simply finishing. I keep coming back to this world a few hours at a time with no real accomplishment in game. Like a textbook, I have no problem with learning the ins and outs of this and furthering my experience beyond where I could stop.

Grimoire of the Rift is an entire beast in itself. It has hours upon hours of customization and a long list of things to distract me from the real quest. However, its story is one that leads me to a conclusion just based upon the fact that I have to play the main story to get more side quests. I build and build upon this game for hours of my life until I beat it. I don't have to do the grind. The game isn't hard enough to merit this, but it's just a system I can't escape from. It's a book I read until I know all of its information. Then I reread it just to see how I can approach it differently. 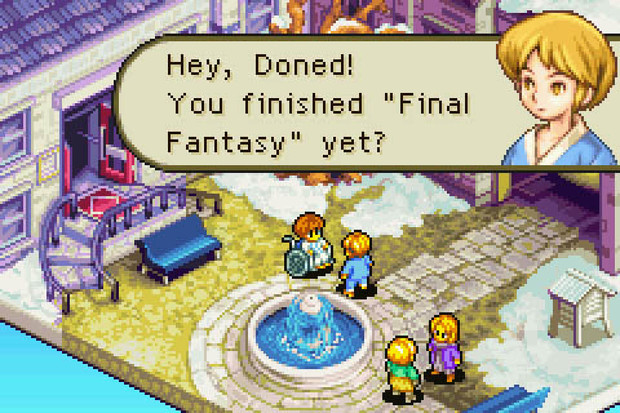 No, I'm not finished with Final Fantasy. Not yet.

Final Fantasy Tactics in all of its iterations are games that I can't let go of. They are games that mean something to me as moments in my life. Each iteration is different and unique enough in what it takes from me. I could never put these down and I don't think I'll ever not want to revisit their worlds.