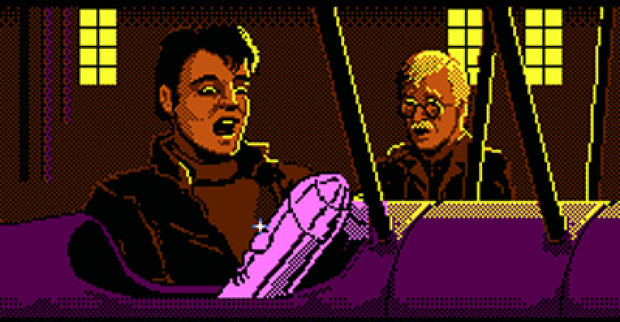 We as gamers truly take many of our freedoms for granted. We get the opportunity to play with so many different things in this hobby. The amount of imagination and thought that goes in to the process of making these games is mind boggling. Just imagine all the wonderful landscapes you have seen over your years of gaming. All the wonderful things that have happened.

Then somebody decides to throw in a jetpack and our collective imaginations explode in creativity.

Jetpacks are freedom. Freedom of movement, freedom of exploration and freedom to find what shouldn't be found. They are the absolute fulfillment of our imaginations. 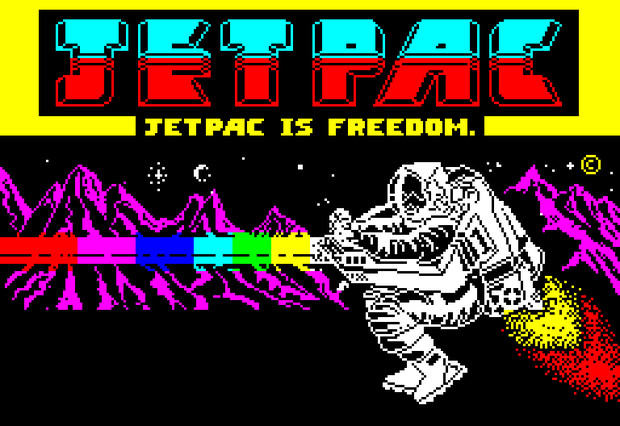 What a thing to have.

To be able to move in any direction at any time. It is amazing if you think about it. While Mario was confined to running and jumping, games like Jetpac were moving around freely. Well, as freely as 2d sprites can move. At the time however, that was free enough.

Without the 3d element, games were subjected to barriers and ceilings, but the key is movement. Platformers tie you to the platforms you walk on. Even flight sims and shmups force you in some kind of forward progression. The jetpack does away with all that.

It creates a method of movement that is still limited in scope, but makes strategy and implementation in simply moving around a free arena. In effect it turns the simple movement from Joust in to something different. It's an interesting variable that allowed protagonists to break gravity.

It not only gave us flight, it left us without direction. 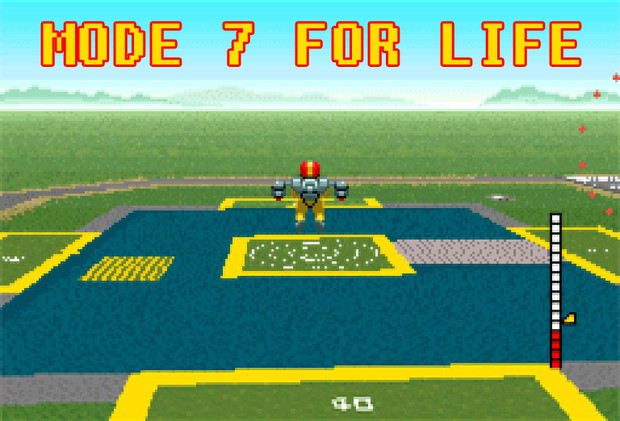 It wasn't until Pilotwings that we really got to understand what freedom of movement truly is. The game starts off by fastening the player to a plane barreling towards a runway. This was nothing more than an expansion on flight sims that came before it. It was fun, which is something that we should ask for. However, that's all it was.

Then the game let us use a jetpack.

I like to believe that there are other challenges in Pilotwings, yet I'm struggling to think of anything else other than jetpacks. Hang gliders maybe? It's hard to remember as everything was a hurdle in the way of more jetpacking.

I believe that Nintendo is capable of more than just a jetpack mini-game. However, I refuse to play anything in any Pilotwings game that doesn't have the words "Jet" or "Pack" in it.

What Pilotwings did was give us a blueprint in to how we are supposed to operate on a 3d plane. You have the ability of full 3d movement in what would be a faux 3d game. Say what you want about Mode 7, it gave us access to the third dimension before CD's could.

It did it well too. The rockets felt like they had a real propulsion system and would eventually pave the way for what true 3d would accomplish.

Just like Nintendo always does, it showed us the way. Games of many different genres began to implement the concept. Pilotwings changed the way we design.

Did you know that the Banshee in Halo is nothing more than a jetpack that you can ride in? Think about it.

Take the basic model of a jetpack like the one in that Jetpac image above. Lay it forward on it's belly. You now have a Banshee.

When Halo gamers finally became excited over this added perk in Halo: Reach, I was unsurprised by it. For I had already battled many a grunt in what I would term a Super Jetpack. This smaller more compact version just didn't seem to offer much different than what I had already experienced in Combat Evolved. What it did was manipulate the gameplay.

With the removal of the vehicle itself, we were now exposed to weakness. The same rules of the ground apply, but a sacrifice must be made for higher ground. A choice and consequence arrives that changes the superior advantage of higher ground. 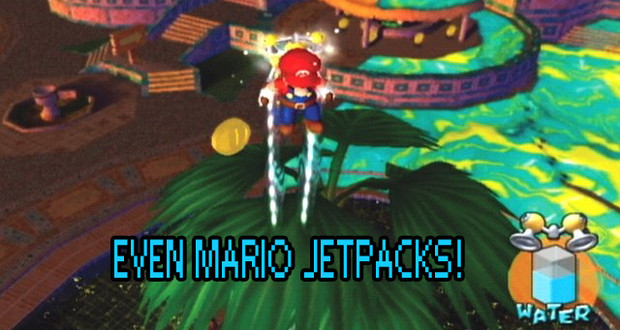 What the advances on the jetpack brings is a host of new perks. In First Person Shooters, we're able to find something more than just the norm for our firefights. To climb above our enemies and proclaim "BOOM HEADSHOT!" while floating daintily in the air.

In sandbox games, we are able to explore a world rich with possibility. To find secrets and expanses different from what we would have found with our feet on the ground. Grand Theft Auto gave this to us as a reward and it shined a new light on the city we had driven for hours.

With a jetpack, we are able to search the world and touch base on anything.

Even 3d platformers are using the game as a boost to the simple platforming elements they have perfected. To give Mario that extra boost that he couldn't get just jump, jump, jumping his through the level.

We are able to test how sturdy these creators made this world. We are experiencing freedom in the basest form of the word. 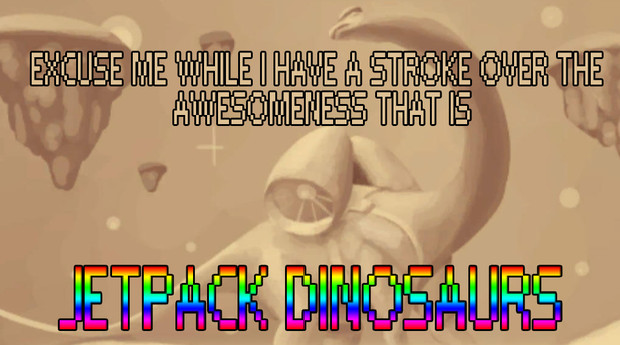 To say the jetpack is flawless would be silly. Dark Void turned a brilliant idea in to a flight sim. It turned the jetpack in to a ship. This negates the whole concept of what strapping rockets to your back is supposed to be doing. It's supposed to make you think about where your going and what you are doing.

That awkward control you get from flight is the entire principal. Perfect turns and barrel rolls create a precision in movement that negates the work involved in moving. As a player, you shouldn't be able to auto pilot through a task. That is the game removing your freedom. It removes the freedom to mess up.

Jetpack Brontosaurus understands this principal by forcing you to move a massive object through rings and on to platforms. This bulky control presents challenge and puts the precision of the movement on the player.

Dark Void Zero understands this by making your boost slow so that focus has to be applied when it limits your movement. It's why Dark Void Zero is still considered a better game than it's big budget brother. 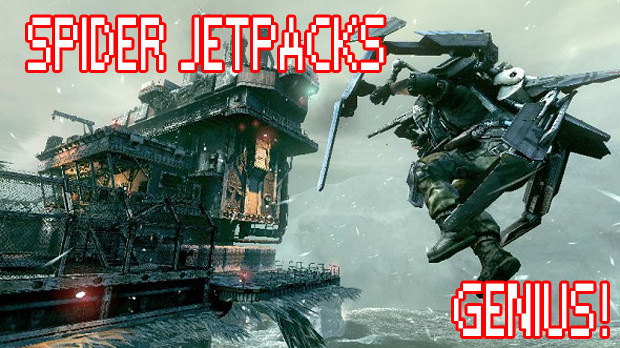 Jetpacks are amazing. They speak to nearly every innate concept of what freedom can be. Freedom of choice, freedom of thought, freedom of having two massive bottle rockets propelling you in to god knows what. They break down the game at hand and turn it in to something completely unique.