So, it's Father's Day today and I wanted to share a bit of pride I experienced recently as a father. My daughter made a game. I mean I made one too, but that's not all that important.

With this Corona Virus situation throwing the world in a loop, the effect has gifted me a significant amount of time to work and play with my daughter at home. That's a blessing obviously, but at times can be a handful. I had to work with her on math problems when she wasn't really grasping fractions with the 1 hour a day class conference calls with teachers. I had to motivate her to keep up her music as we struggled to figure out that online music lessons really don't replace being in the same room with her teacher. I've taken up soccer for the first time since I was her age as a means of getting her some daily excercise since camps are closed. It's a frustrating situation we are all facing, but often I get to experience the reward of her success in environments I'm usually not a part of.

So a few months back I figured I would try to teach her how to code a video game as a means of learning a skill and getting her to be better at writing. This decision was made in the time before masks but it really didn't roll out until I had to figure out something to do with the kid when the world outside was shut down.

If you checked out my entry to the Pirate Kart a lifetime ago, you'll see that I know very little about coding. Through some form of witchcraft however I figured out how to make words and pictures pop up on a screen. So from that point on I figured I would try to teach visual novel design to a child (and learn some new things along the way).

It started off oddly enough at a half price books clearance sale where we picked up a handful of old "Choose Your Own Adventure" books. She got a kick out of Sabotage and I used that to explain choices as variables in games. With that basic concept, I introduced her to some visual novels as actual games. You know, once I actually found ones in my collection that were for all ages. She can play Steins;gate when she gets a bit older.

I showed off some Fruitbat Factory games I'd picked up over the years, but the big hit of course was Phoenix Wright. She had a blast which gave her an idea of what to do with dialog boxes and presentation. Lockdown happened and we tried to deal with school and all the chaos that surrounded the work week, but once we hit Summer vacation I figured it was time to begin making games.

So I showed off the Dariaia visual novel I'd made after a weekend of using the internet to help me parse together code and she wondered why I made it. That spiraled into a conversation about game jams and we scoured the internet looking at the crazy things people made out of simple boredom during a weekend. Ludum Dare, World Game Jam, and finally we landed on itch.io's page which had a jam with a cute little duck in it. I said to her "you know we could enter that."

Which is what we did.

So we entered into the I Can't Draw But Want To Make A Game (Again) game jam. It's title kind of explains everything that encompasses the jam and why it would be perfect for a couple of novices to enter. She looked at me and said I'd have to enter too, which meant we both had a summer project planned. Now I actually had to teach her how to make a game. This was a bit more difficult than you'd think because if you actually play that Dariaia game I made, you'll notice it doesn't have variables. That should give you an idea of where I was coming from as a game designer.

I had about 2 weeks before the jam started to work with her on the fundamentals of game design while I figured out basic coding techniques after her bed time. I want you to remember, it took me a weekend to just understand the how, what, and why my game kept breaking in Renpy with Dariaia.

My kid spent ten minutes messing around in the tutorial before she was halfway started with her test game based on the Three Little Pigs. I loaded up photoshop on the laptop she got for Christmas and after a few hours she was now screaming "I did all of that on the wrong layer?" like a professional. 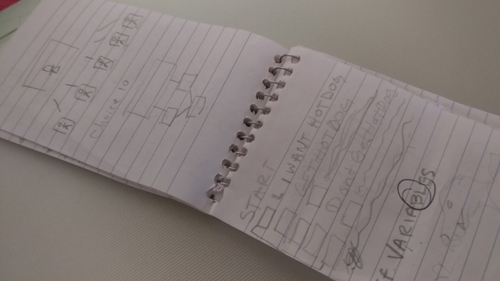 By the time the game jam started, I was pretty confidant I could leave her to it. If she came to me for help, I'd help her obviously. Lots of "why isn't this working?" with a few "Daddy, this doesn't make sense," thrown in the mix. Most of the time the answer was as simple as her forgetting to close her brackets. This happened a lot, but much less than I ever would have expected.

In the end she had a fully functioning game a full day before the jam ended and most importantly before my game was done. Is Terry the Pterodactyl a great game that will gain a cult like following? Probably not. It is however a complete one. After I edited the game for grammar and I pointed out some basic story issues, she said she liked the game and she was happy with it.

I then submitted it for judging with her approval. As soon as the page went live, I showed her the page and let her know that she was now a game developer. Her smile was huge.

Then I pointed out to her that since the jam is being judged, she could technically win an award which would make her an Award Winning Game Director. Judging is still going on, but we tapered our expectations after the number of entries jumped from under 100 to a whopping 400 by closing. I got to hear her quietly squeal in excitement though and that was worth it.

I'm proud of her and this moment we had spent together making something.

You can play Terry the Pterodactyl below:

If for some reason you want to play my ugly game: