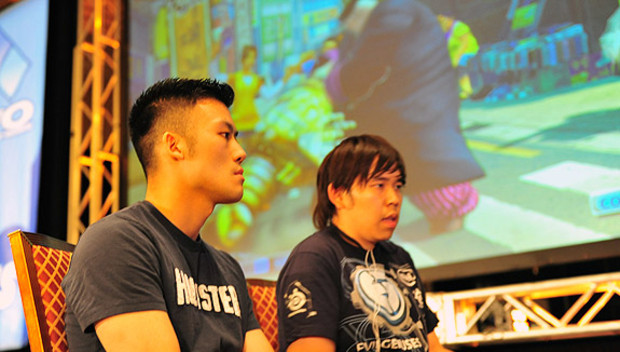 Every competition has a team, a fighter, or a surprise that people just tend to gravitate towards. Almost everyone rooted against Daigo, just because its just fun to see the underdog come through some times. I had a personal grudge against Daigo as every time he played my computer lagged up. My personal fighter of the tournament was Vangief. As was explained to me throughout the pools section of the Super Street Fighter 4 tournament, Zangief was nerfed in this version much like Sagat was. This obviously forced many fighters to change up their attack strategies. Unlike Sagat, Zangief has always been an odd duck in the Street Fighter universe. As a close range fighter in a game highlighted with projectiles, he's all about taking damage to dish out damage. It's a tough system that rarely pays out. With a nerfed Zangief, it makes players vastly increase the amount of risk the character has to take. Vangief pulled it out numerous times against top class fighters and made a very impressive showing as he made his way to top 8. Using a golden Mecha Zangief was also kinda badass.

The other highlight of the this tournament was Gamerbee. In the pools section there were a few Adon players that just couldn't get it together to advance to higher match play. Commentators went over how it was just because Adon isn't a top tier fighter. Then Gamerbee showed up and shot that down real fast. His timing was just impeccable against top tier characters like Rufus, and a Justin Wong controlled Rufus at that. He just seemed to have a great strategy of overwhelming characters in the corner that seemed to just disappear during the final day of competition. Still, he was completely unexpected and came out and put on a show.

The best fights of the entire show for me were the Justin Wong vs Vangief fight and the incredible Sabin vs Lamerboi match from Super Street Fighter 4. Justin Wong being the former EVO Street Fighter 4 champ had a very hard time against both Gamerbee and Vangief in his failed attempt at the top 8. His fight against Vangief was epic however as two non-projectile using fighters went back and forth with Rufus trying to chip away damage and Zangief trying hard to get in close. I mean just look at the footsies* by Zangief.

The Sabin vs Lamerboi fight was just intense. Sabin differentiated himself from the others right away with a very intense Dhalsim that kept pressure from very far away while punishing those who got in close. Then we had this nearly ten minute epic fight against Lamerboi's strong Guile. It really has to be watched to be appreciated as they both battled hard for dominance. This also wasn't Sabin's first fight against a Guile as he fought a war with Warahk earlier in the tournament.

I will have to say that Tekken 6 just isn't as flashy as Super Street Fighter 4. I believe its the devastatingly high combo count that just removes the appearance of skill. Not saying that there isn't skill in Tekken, I just think that as an audience member the fight doesn't appear as technical. The highlight of the Tekken 6 tournament was a Law fighter named Rip during the finals. His dominance and subsequent use of taunts in the matches preceding the Grand Final made him seem like a jackass, but he was winning in dominant fashion with moves that shouldn't have landed. That is until he made it to the Grand Final and fought Nin.

It looked like the same story in the first round, but then everything changed once Nin got comfortable. While not as back and forth interesting, it was a bit fun to see him get some comeuppance. I really don't feel too bad for saying that. He got one of those big bad ass fight sticks signed by Harada.

Speaking of Harada, him popping up and ambushing Ono on stage was amazing. I don't know what Ono is releasing this week, but I'm actually paying attention now.

I guess one of the last things I want to take note of is the addition of a Womens Bracket for Super Street Fighter 4. Most people on here have a general disdain for the gamer girl. Not because you need to have to have testicles to play tha video games, but because in a community where you are connected by your hobby, labeling yourself as something different brings unwanted attention.

In saying that, I'm really not sure if I'm cool with a Womens tournament. On the one hand, every competitor of that tournament had to compete in the main one. No exceptions. On the other hand, why should we as gamers set something up for people who couldn't advance out of the main tournament. I'm not saying a woman couldn't advance, I'm saying a woman didn't advance. It almost seems as if EVO predicted that a woman couldn't stand toe to toe with Daigo and decided to make them feel special for competing with the big boys. As a promotional piece however it probably did pretty well. Kayane is kinda cute and she did have a strong showing against Burn Your Bra. As a gamer however, I just can't accept the inclusion of this when they could have had any other fighting game that both a man and a woman could compete in showcased during that time slot. I do have to say though that apparently some of the women refused to participate in the tournament and I'm actually kinda disappointed in that. The girls should have had enough confidence to be able to say "I'm gonna win both tournaments and do away with this Womens bracket stuff". Also, Firefox keeps telling me that "womens" is not a word. I don't think it is either, but that's what was showing up on the Evo2k stream site so that's kinda what I have to call this.

Finally, something about Marvel vs Capcom 3. Still not sure if I like the style of it, Iron Man looks like his armor is made of leather and Morrigan looks to be wearing a jetpack, but it's looking a little better than what I saw originally. The Spider-man stage is just amazing in concept with the lift constantly rising til it reaches the top. Deadpool looks or plays very similar to Spidey which is odd to me, but he'll probably replace Cable with the guns. Chris Redfield looks like a douche. At least to play against. Bombs in the ground, bombs in the air and a strong shotgun make for a very convincing support character. Almost everything else looks exactly the same as Marvel vs Capcom 2 except for the fact that it took so long to knock people out. This is obviously a damage tweaking issue.

In closing, I think this event went over surprisingly well. There were some serious lag issues, hopefully due to unexpected interest in the fights, during the first day that was expertly fixed by splitting the streams. The final match between Daigo and Ricky Ortiz did however drop which was infuriatingly unfortunate. I really do hope this next year bolsters the fighting game scene as it was really nice to see a well planned show like this. Maybe if this was successful, they'll show the Japanese EVO tournament that is set for later this year.

Also, I need to buy a fightstick or more realistically the cheaper mad catz fightpad. I can't pull anything off with my 360 pad and after watching these guys for 3 days, I'm rather ashamed at how hard it is for me to get my sonic boom to work.

*Footsies is a term that references the foot work used to keep opponents in and out of reach.
#Community    #Industryevents
Login to vote this up!