Comics in Games: Games in Comics

Comic books have been able to easily bridge out to other mediums to showcase their stories. The film industry has grasped the superhero genre so tightly that it would be odd not to have a summer blockbuster superhero film. The video game industry had many years of terrible products being fed to consumers, but there is more than a handful of truly excellent games based on comics that have come out.

What I'm not seeing are comic books actually expanding within their genre. With comic book shops seeing fewer and fewer walk in customers, the demographic shares seem to be shrinking as kids pick up controllers instead of comic books these days.

With the market shrinking to give way to digital, why can't somebody offer consumers both? Why can't we have the presentation of a comic paired with the interactivity of a game? 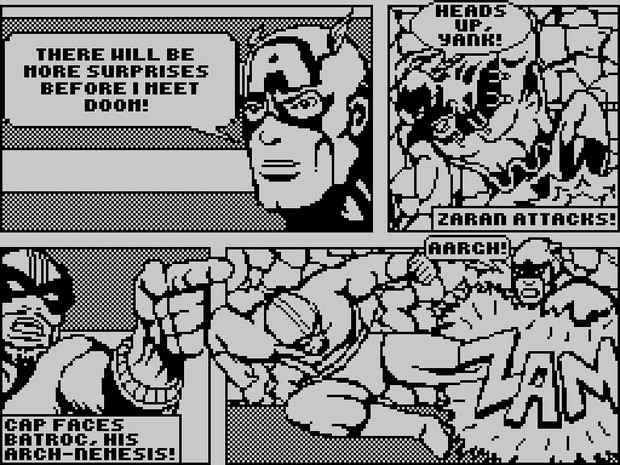 I was noticing how much of a failure this concept was in application with The Amazing Spider-man and Captain America in Doctor Doom's Revenge! The game itself is as terrible as the comic it attempts to display within it. However, it wasn't the only one.

Captain America and the Avengers has a comic intro to each of its scenes and they do absolutely nothing but fill the gaps between levels. It's nice to have some pixel art and drawings to split up the action, but the scenes have no purpose. This has become a running theme throughout many lower budget games that can't fill the cost of developing cutscenes. Captain America for the Droid has a terribly done comic inside of it.

This idea of a comic book being spliced in to a game just seems like an inherently bad one. There doesn't seem to be that happy medium as either the gameplay or the presentation of story suffered because of the pairing. If you focus on the pacing of working a well written comic book in to the pages, you hit this barrier where the game must break you away from what you are actually enjoying. On the flip side of the coin, if you focus on making the gameplay too enjoyable, the comic sections are weakened for it as you break up the action.

It wasn't until I sat down with Imaginary Range that I actually saw how this can all really should work together. 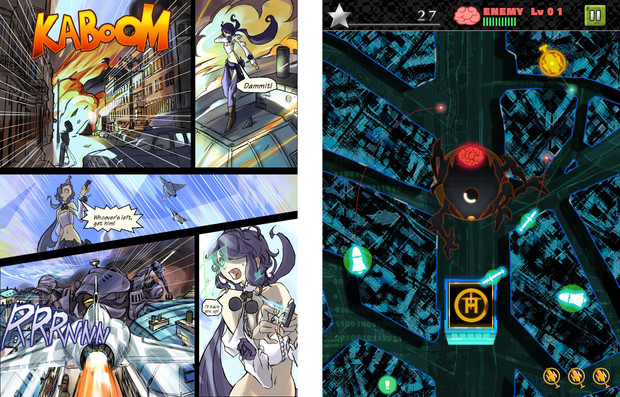 Imaginary Range is a free "game x comic" from Square Enix producer Shinji Mashimoto (Final Fantasy XIII) for Android and iOS capable devices. The idea for Imaginary Range was to splice game mechanics in between the key events of the comic. These mechanics however couldn't be large enough to truly turn the comic in to a full fledged game. On the development side, they had to work in conjunction with the panels to blend it in to a true "game x comic."

For the most part it actually works. Gameplay is short and sweet and acts as little more than a minute distraction from the events. The events are chaotic enough to encapsulate multiple puzzle styles and meshes the game and comic elements surprisingly well.

The biggest element drawing these events together lies with the hidden icons scattered in panels. It's a simple collect-a-thon styled addition, but it works to draw attention to the panels. It's subtle, but for a comic that is broken up with little side games, this idea works to focus the reader on the panels from page to page instead of the mini games.

Now this isn't all said to triumph Imaginary Range as the quintessential comic book game. The story is too chaotic and the gameplay isn't nearly deep enough to bolster it as a profound experience. As an idea however, it's potential is extremely interesting. 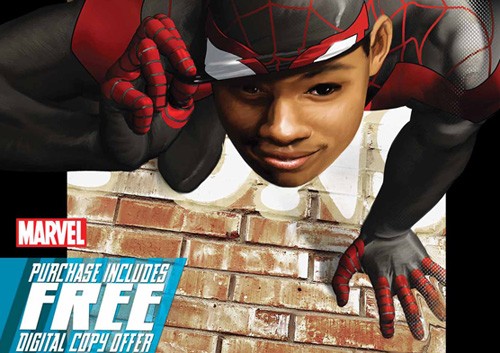 From Imaginary Range we can take these ideas in to the actual big boys themselves, superhero books. Many complaints that can be sent towards comic book tie-in games is that the content is never able to actually replicate the feel of a comic book. Constraints of the engine, the development cycle or the actual material itself has always complicated the transition.

Simply enough, how hard would it be to attach small mini-game elements to an issue or trade of Spider-man?

Shouldn't be too hard. That's how simple the idea is. Comics have never been as action oriented as Doctor Doom's Revenge implied with it's battle per panel approach. That's why it ultimately failed. Events and dialog take over a book to build the action and then once it unfolds, the game begins. It's a balance that could liven up some books as the electronic medium begins to slowly eat at the print market.

Comic books have been somewhat stagnant since the crash in the 90s and licensing has been their only effective push in to newer markets. The biggest news out of the industry recently is Marvel's push for digital in the Ultimates line as well as with a few newer issues like Avenging Spider-man. Essentially, each issue of a book will come packaged with a downloadable code for the book. It's one of the most interesting moves in the market right now and I hope it really pays off.

With the rise in digital publishing, a move to interactive comic books doesn't seem like too farfetched of a step. Comic books were built on gimmicks that will get consumers to shell out a little more for the exact same experience they would normally get (Holofoil practically defined the industry in the 90s). A marketing push to pick up that coveted 10-30 demographic might be a start. Purchasing a physical trade of the Halo Comic book could net you a redeemable code for it's interactive equivalent on XBLA.

It's an idea, but the biggest home for this idea seems to be on touch screen phones and tablets. 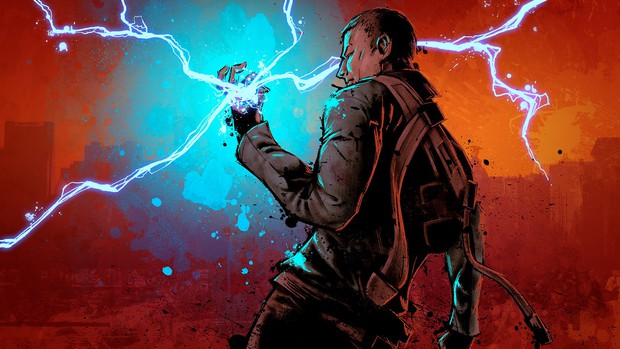 Imaginary Range's style of gameplay works extremely well for these touch enabled devices because it utilizes your hands. It might be a silly thing to say out loud, but that is a huge boon for the game. There is no satisfying replacement for turning a page. Most professional readers fail to account for how the books would efficiently be read. Cdisplay on the PC is the only thing that could come close to replacing the experience.

There is a different way to approach it though. Motion comics have started to become a bigger trend with developers. If you had a short dev cycle, you could have a static voiced image with some minor animations easily replace a time consuming and expensive FMV. A game like Infamous capitalized on this and utilized the style in an attempt to replicate the feeling of a comic book. It's a system that could pay out if the attention is given to it.

Unfortunately, I've yet to see a motion comic that was good enough to replicate the imagination used in comic books. Fully realized films or games can expand upon comics because they take the original material and transform it in to something new. Taking an idea and transforming it half way simply fails to yield the return. Worse off is the quality of voice acting and true lack of presentation available for many of these projects. There just isn't enough demand to take the source and make it something special.

Original IPs have it easier. Infamous tried this and it failed because it faced that same problem I was finding before. In trying to replicate the comic, they removed from the game. You have this fully realized 3d world that is then broken down in to a restricted 2d event sequence as soon as you accomplish something purposeful in game. It's different and is something you don't really adjust to. To play countless hours in a 3d world only to watch a quick 2d animation comes off as strange.

It can work, but it really only does in games that blend the look and feel in to the comic. 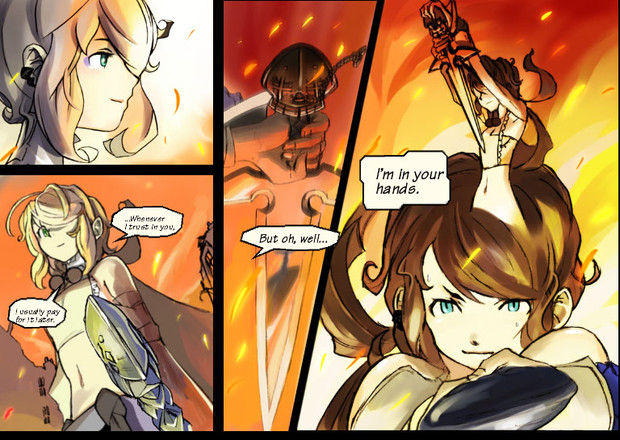 Square Enix trudged up old ground with a solid example of how you should put a game in a comic. It was a good start, but is there enough creativity to keep this concept alive? It has taken over six months for any news of a second issue to be revealed. Can game development and comics even exist in a model predefined by the monthly release schedule?

Imaginary Range for what it doesn't accomplish in it's narrative made me think of a the ways my stacks of books could be improved with just a little interactivity. It can be a way that comic books can make the readers imagination come alive. To be able to dodge the Green Goblin's bombs or to defuse the bomb before it explodes.

There is now a definition to what a comic book video game could be and I have a laundry list of books I want it applied to. 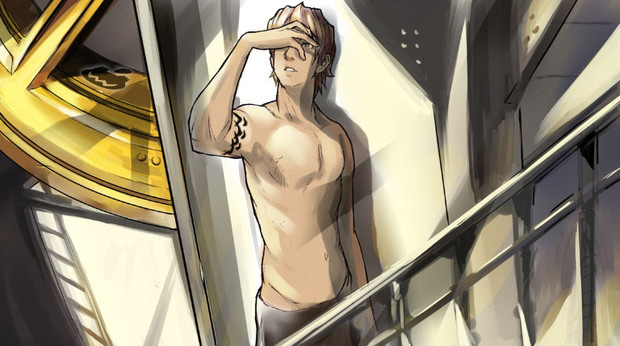