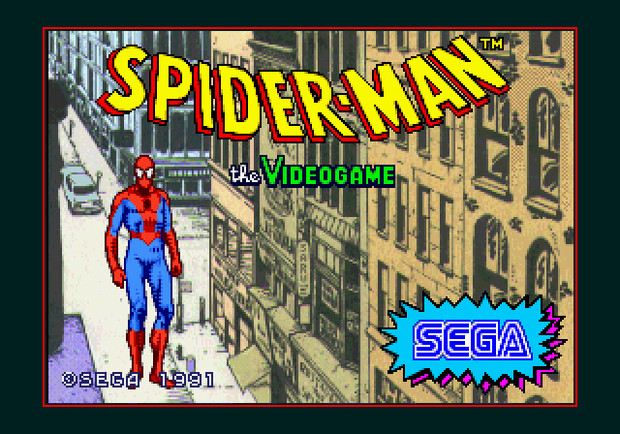 Crossover stories never start with big arc's like the ones we saw in Secret Wars or Crisis on Infinite Earths. These beginnings are experienced in their own worlds with the team up. What better way to start this off than with Marvel's biggest icon, Spider-man.

Sega, getting ready to start moving in their 3d hardware in the Arcades, pushed out only a handful of quality new titles on their Sega 32 system in 1991. This board would also be used to run games like Outrunners and Air Rescue. It was a system that had few titles and would then be rendered obsolete with the Model 1 and 2 boards that made games like Virtua Fighter and Virtua Racing so popular in the mid-90s.

These Sega 32 boards never caught on primarily because the improvements were slight over the cheaper Sega System 24 and Mega-tech boards that had been running since the late 80s. With Sega pushing their Model 1 and 2 lines later, the system was simply caught in between.

Spider-man: the Video Game is one of the only standouts of the small library. In a time when beat-em-ups were popping up all over the market, this added a zoom in and zoom out feature that changed the size of the characters on screen. Features like this enabled the game to have a slight platform feel that was welcome in a post Final Fight world. The higher Pixel quality is very apparent when compared to Data East's Captain America and the Avengers released the year prior.

Spider-man's story brings the Black Cat, Hawkeye and Prince Namor to do battle against the nefarious Doctor Doom and a list of Spider-man's greatest foes. Each character has a different feel with special moves differentiating the four characters. Hawkeye shoots his bow, Namor uses an electric punch thing (presumably from eating too much eel), Spider-man has his webs and the Black Cat uses her grappling claw. No character feels any stronger than the other, but each character is differentiated by their move sets.

Your standard enemy types are completely uninspired with power ranger-esque Putties and gangsters giving you the typical trouble. Boss battles however use the zoom effects quite well as you have to scale a building to chase down Venom or battle Electro on a helicarrier. It's nice and gives a different feel.

The life system is unfortunately the count down system where you start off at 400 and gradually drop down to 1. It was the cheap way to get more quarters out of gamers and unfortunately it worked. Damage also takes percentages off, but it is theoretically possible to clear the game on 1 credit if you take absolutely no damage.

Spider-man: the Video Game is set up as the simplest form of a crossover. A wall crawler enlists a Prince, a thief and an Avenger to help him battle against a group of enemies that would be harder to take on alone. Walk right and figure out the truth behind whoever is gathering these villains.

Co-operation was the simple beauty of these arcade games. Playing by yourself was never as much fun as standing beside three others and battling to defeat Dr. Doom. It acts as a perfect replication of the friendly crossovers comic books have given us over the years. The story might be a bit simple, but the fun of fighting next to your allies is something that can't be replicated without a pocket full of quarters and three people to help you out.

Next: Spider-man and the X-men in Arcade's Revenge