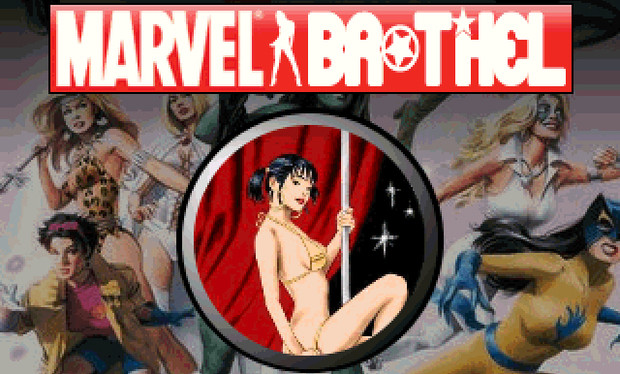 In 2009, a small contest was started on a forum many have never heard of. It asked it's members to take an existing license and turn it in to a game. One of the highlights of this contest was Marvel Brothel.

For two long months, he worked on the game. At times spending 11 hours a day to get it operational. His end product was something that grew so popular, Disney itself had to come in and shut it down. Nearly 2 years after it had been released on to the internet that is. The popularity of Marvel Brothel came in an explosion after a handful of websites picked up on it. It really wasn't surprising that Disney would send out a cease and desist letter after all of the press over their newest property.

It really is a triumph that a brothel simulation garnered so much press. If he had stuck with his original idea of a Pussy Cat Dolls Brothel, the game might never have gathered much interest from anybody. 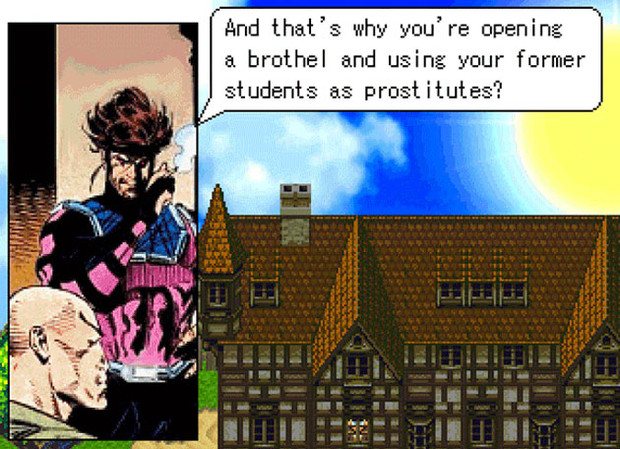 The idea is simple. Charles Xavier, seeing that his efforts to bring peaceful co-habitation between humans and mutants isn't progressing, decides that the oldest profession might be the best way to finally bring these groups together. Of course Gambit is more than willing to help him along in this endeavor.

From this inspiration, Xavier starts with Jubilee, Rogue and Storm and builds a den of ill repute in the backwoods of Westchester County. While this method comes with some initial hesitance, the girls do understand the point of Xavier's new venture. From now on they will service any and all clients. That is, if their consumers demand their services.

Marvel Brothel is built around the concept of supply and demand. You have a list of traits that certain customers are looking for and you have a selection of girls to service them. All gameplay revolves around Xavier trying his very best to pair his ladies together with as many men as he can before a set time limit is up.

Gentlemen simply ask that the girls match a total of three criteria. Energy, kinkiness and a rarer special category change who you match the girls up with best to maximize the profits of the day. Xavier has to build up their stats while maintaining their health, so he can ensure maximum profits day in and day out.

Also, that special category mentioned is for the occasional guy that's looking for something extra in a girl. One man may like his women to be able to read their minds while others just want them to turn invisible. I guess some would call those fetishists. 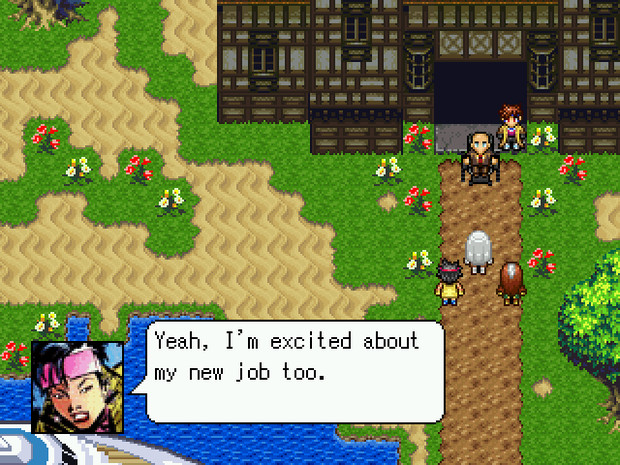 Standing in the way of Xavier's goals is a handful of trouble. The demands of the clients grow at a steady pace while introducing newer demographics. Thus, expansion is needed for both the mansion and for the types of girls themselves. Fortunately, Mojo has set up a nice little slave trading ring to supply you with new girls. These girls however don't come cheap. They'll have to work off their freedom through...well you get the idea.

Expanding upon the mansion itself isn't cheap as well. Through regular visits, the Kingpin really pushes the idea that the mansion is supposed to be upgraded at regular intervals. With each upgrade, he brings in more diverse clientele and you have a greater chance at building your dream of peace. So you are required to buy couches, red lights, and even the occasional set of toys to keep the place fresh. All while giving the big man a percentage of your daily take each visit.

These concerns don't even factor in what the occasional fights with Juggernaut, Mr. Sinister or Toad cost you in profits. Those however are small threats. 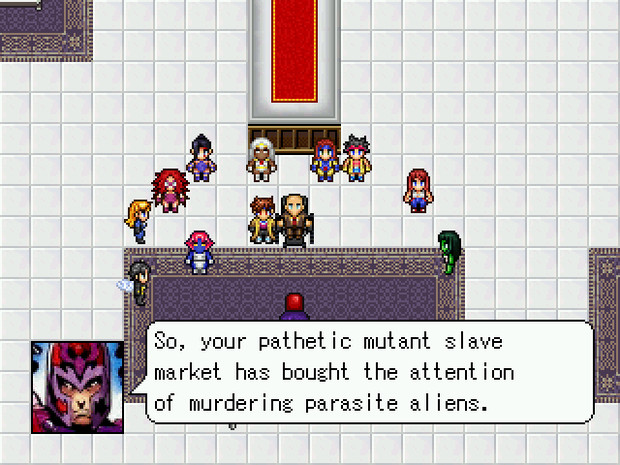 The alien symbiote has used Venom to call upon an invasion of Earth. That invasion begins with the Mansion. You'll need the help of the She-Hulk, Elektra and many others to stand up to the waves of enemies coming in. All in all, the women working will have to satisfy around 30 highly powered symbiotes if they plan to save the world.

What Marvel Brothel never tells you at the beginning of the game is that you are building this mansion to accommodate this final party that will save the world. It is a task that you have to prepare for on the very first day of work. It unfortunately isn't explained well enough until it is too late. Pair this with the fact that the game doesn't inform you enough of what you'll need to do to accomplish this goal.

Marvel Brothel almost forces you to use your first playthrough as an experiment. On any given day a normal man would not be able to stop this threat. It would take an exceptional playthrough. In this regards, Marvel Brothel finally builds Venom in to a true foe. 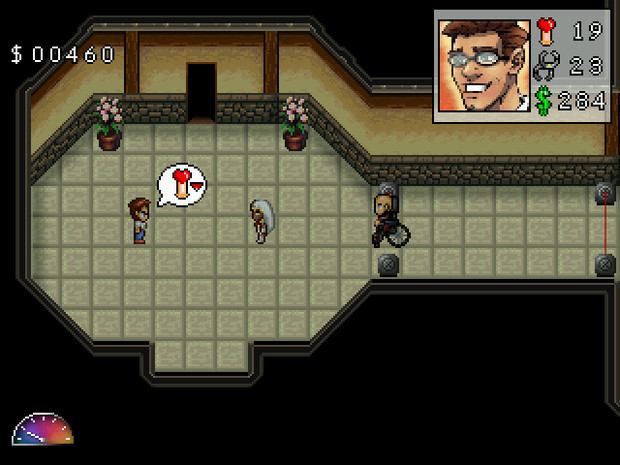 RPGMaker is an aging engine to create games on. While on the market for decades, the content provided with many of its games are simply not up to snuff. In some regards, Marvel Brothel falls flat.

The sprite work is reminiscent of your standard Squaresoft Final Fantasy characters, with an X-men paint job. If you expect some brilliant piece of engine work, you won't find it. Most of the game uses materials borrowed from many different sources to create the world. Pictures are taken directly from comics, with no real concern for the style presented. When you go from one image to the next, it becomes painfully aware that there is no common artist among them.

The music itself is also comprised mainly of popular tracks that many will recognize. Stumbling across Disgaea's level up tune was pretty fun in a "name that song" kind of way. It is a bit ridiculous, but I really shouldn't expect anything less from a fan game. Especially one that wasn't always planned to be a Marvel game.

The way everything is presented however is where the game shines. Nothing ever feels truly out of place and more often than not, you'll be surprised with something that fills in the game instead of removing from it. The Marvel scroll that began with the Spider-man films is animated and opens up the game. Following this is a pan down from a beautiful day to Rogue and Storm on a ship, with birds overhead, coming to meet Xavier. Something that was planned quite well and is certainly appreciated.

Starting off with Rogue, a person who would kill any man she touches, is brilliant. Figuring out what to do with her adds a layer of attention that many wouldn't expect. You can see this in the events and pairings. Having characters like Namor come in needing Sue's services is just another way of showcasing the attention applied to these characters.

When Magneto storms in to the X-mansion demanding that Xavier stop perverting his people for humankind. It was a speech that had me half convinced that I should stop pushing Jubilee off on every man that walks in my store. The game is full of little cues that make it much more rewarding that one would initially believe.

It isn't perfect, but it isn't bad for a brothel game based on a comic book. 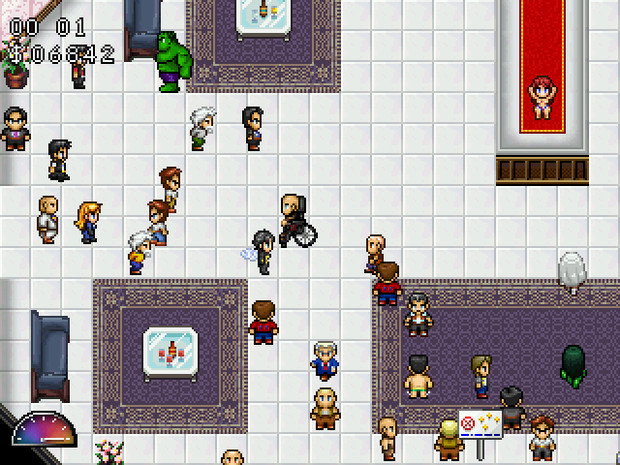 What Marvel Brothel brings to the table is a game whose highest point is what you feel was put in to it. The gameplay is solid, the music and graphics are recycled, and the set up is odd to say the least. It isn't a game you play to get some perverse itch fulfilled.

Marvel Brothel creates a world where X-men and Avengers come together to bring peace to the world. Is there a simpler form of the crossover to be seen?

For a fan game, this is something different. 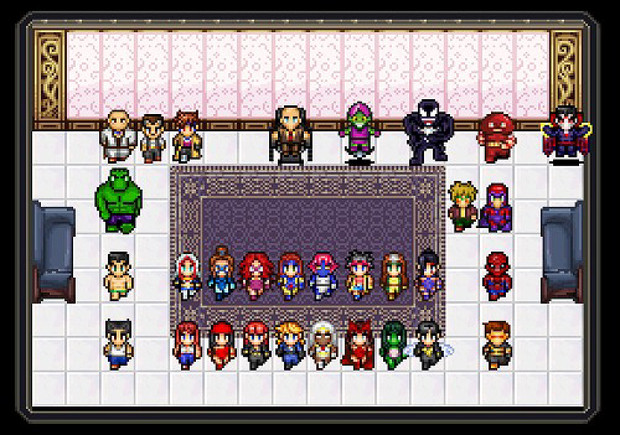