Comics in Crossover Games: Batman the Brave and the Bold 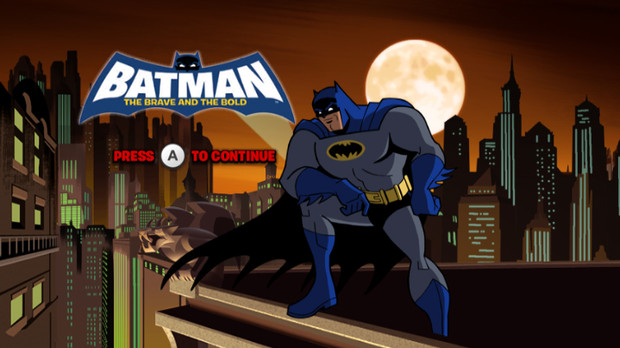 Batman the Brave and the Bold

When I started typing this whole thing out, I pledged that I wouldn't put any of the Marvel Superhero Squad games in. Marvel treats the entire universe like the Avengers and that's not what a crossover is. It's a modern day Legion of Super-heroes. This started pushing me into a mindset of leaving out all cartoon based team ups, but there really aren't any staged like the Brave and the Bold from WayForward.

Brave and the Bold was originally a comic series published when DC was looking to bring their past heroes back. We're talking heroes like the Silent Knight and the Golden Gladiator, not Batman and Superman. They would push multiple stories collected together with these different characters in an attempt to garner as many different readers as they could. It wasn't until 25 issues later that the book took a twist towards the super. DC first revealed the Suicide Squad , then the Justice League and then followed with a team up issue that would eventually lead to the creation of the Teen Titans. It became a book that would kick start many of the greatest ideas that DC continues to use today.

Around the middle of 1966, DC decided to change the lineup of the book to coincide with the fresh Batman TV series. As of issue 67, the book would be scripted as a Batman team up title with the dark knight and a fresh hero coming together every issue. This change continued almost uninterrupted til the series ended at issue 200 in 1983 with Batman teaming up with, of all people, Batman. You would think his teaming up with himself would signify a shedding of his friendly ways to go back to being the lone wolf that he portrays himself as. Nope. He goes instead and creates a whole team of loners or "Outsiders" to run around with and the series would be put on hold. 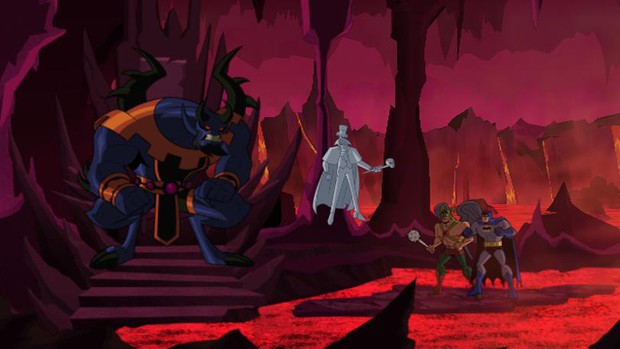 In 2007 DC brought Brave and the Bold back with a focus on team-ups not specifically using Batman. A year later, Warner Bros needed a new Batman that could appeal to the young and old male demographic for their animation teams. It was a move that could easily be considered a drastic reaction to the polarized reception of their edgier "The Batman." This new show would be light and formulaic and would be a bit of a departure from the Batman that Warner Bros Animation built up over the years.

Batman the Brave and the Bold turned in to a series that would have a layer of depth and understanding of its source material that isn't readily apparent with its somewhat goofy presentation. Diedrich Bader's casting as the lead hero is made to give the audience a feeling that this shouldn't really be taken seriously. However, it has translated many of DC's characters in a fresh, yet familiar light.

The show's formula is simple. Each show begins with the stunning, yet short, conclusion of an epic team up where the heroes finally overcome their dangerous foe. Opening music begins and the real episode starts where we get to the meat of the episode. Classic events like Sinestro's turn to evil are brought a new twist with Batman casually joining the festivities. Other episodes like Aquaman being forced in to a family road trip reminiscent of the Griswolds, showcases that the show has legs to move around the DC universe to keep things interesting. It's a series that shouldn't be taken seriously and that's what makes it enjoyable.

This understanding is easily replicated with WayForward's talent in recreating solid 2d games. These are the guys that were able to make an obscure game like A Boy and his Blob relevant when even retro enthusiasts failed to understand why it was being redone. They also made Contra fun again which was something Konami struggled for years to achieve. WayForward has a group of talented developers that work magic on their licensed properties, yet can't ever seem to get that big break with their own original content. 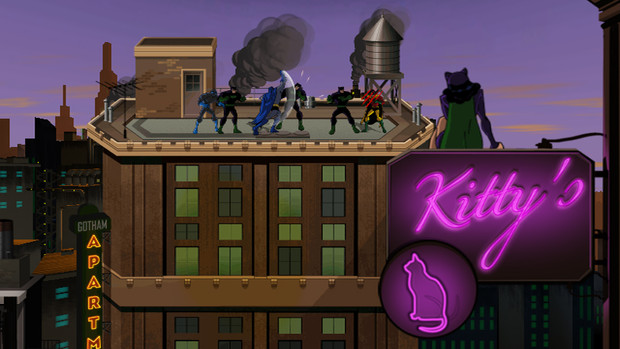 Brave and the Bold leads with you and a friend (or AI compatriot) taking on DC's enemies with an arsenal of upgradeable weapons. These heroes can then be assisted by a large number of jump in heroes in the Wii iteration. Jump in heroes have spectacular attacks that fill up the whole screen and add nothing but flash to the game. You can perform your own super attacks as well, but sometimes its just cooler to have Aquaman fill the entire screen with a torrent of water.

Brave and the Bold as a beat-em-up is decent, but it still feels restricted in what it was trying to accomplish. Having only 5 heroes with bits of diversity to play with is nice, but the fact that there are so many assist characters leads me to believe that they settled on the unnatural choices of Blue Beetle, Guy Gardner and Hawkman over the larger than life characters like Captain Marvel, Aquaman and Plastic Man. The DS version does have a good deal more variety however.

Off the bat, the controls get an automatic ding for the simple act of only having one control scheme. It's not detrimental to the gameplay, but it is annoying not to be able to play this with a simple classic controller. This is only compounded by the fact that the game just isn't as fluid as older games in the genre. Even with a diverse number of weapons and a leveling system, the variety of moves is limited. Especially, since you are going to be carrying Batman through the entire game. It's not bad, its just not perfect. Fortunately for WayForward, it doesn't have to be. 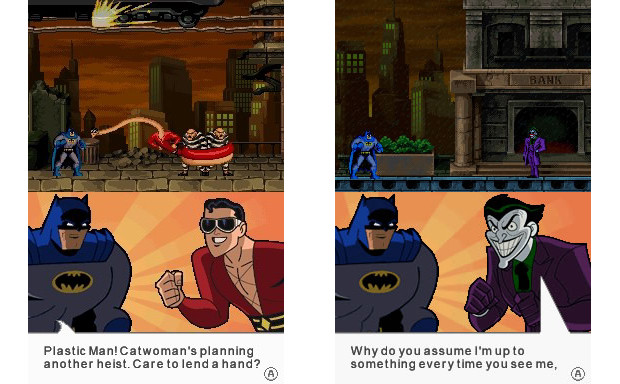 Diversity through the two markets is truly a highlight as both the handheld and console versions of the game can be considered as solid gaming experiences especially since they are approached differently. Certainly not genre changers on either end, they present themselves in a welcome light instead of the usual cheap cash in that comes from licensing.

Brave and the Bold on the Wii is a typical Batman affair that was done in a similar fashion to Batman Forever on the SNES. It's infinitely better than Batman Forever, but the style is the same concept with a focus on constant co-operative support. The biggest key is that there will always be a 2nd player in your game. This being a series built around Batman's team-up, WayForward has a secondary AI character to help if you don't have a 2nd player. Playing two players is ideal however, as the AI could only be considered as competent in assisting you.

For the DS it's played out differently. The characters can be swapped out on the fly making it a better single player experience than it's Wii counterpart. Different elements in the game can be tackled by switching between characters and it presents itself more as a platformer than a beat-em-up. However, the on the fly switches don't lend the game that nice feeling that having someone fight along side you has.

In an unnecessarily nice twist, owning both copies of the game allows you to control Bat-Mite on the Wii with the DS touch screen. I can really only think its value is for those of us who don't own a 2nd nun-chuck or for that lonely third friend relegated to observing a two player team up. It's smart, it's welcome and it's probably wasted on all of us, but at least its a feature that is there for people to use. 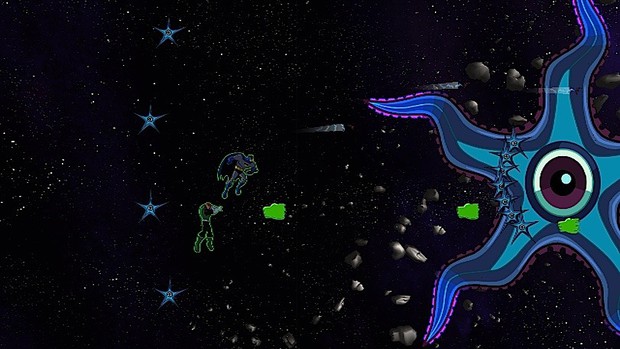 While the gameplay borders on being too simple at times, this is forgivable when you experience the rich backgrounds of the world. Looking around, you can find so many small little details that really make the experience worth while. From the obvious, like the fight in a comic book shop full of Brave and the Bold merchandise to a small poster of Catwoman in her goggle costume at a theater. This game is held together on its content more than the gameplay that it brings to the table.

That's where you'll find out whether this game is for you. It isn't one of those games like Sunsoft or Rocksteady's take on Batman. This is a light hearted game meant to be played right next to your buddy and enjoying what it has to offer. A nice bit of competition is added both in the way that the game ranks between levels and in ways that are a bit more subtle.

The first level has you play along with Robin as the dynamic duo try to stop a jewel thief that has stolen a cat manipulating jewel from the Gotham Museum. Throughout the entirety of the level, Batman and Robin are going back and forth about whether its Catwoman or Cat Man that has pulled this off. In this simple cliche situation, it's hilarious to see Robin taking jabs at Batman for his Catwoman infatuation. It builds a sense of separation between the two and promotes a rivalry as you advance forward to see who the true culprit is. Many of these lighthearted elements are things that sadly aren't really commercially viable in this day and age without studio support or a license to back it up.

Batman the Brave and the Bold is a great team up book with tons of character, personality and detail that is welcome for anybody that just wants to play a game with somebody. It brings the crossover genre in to what it should be, simple fun. 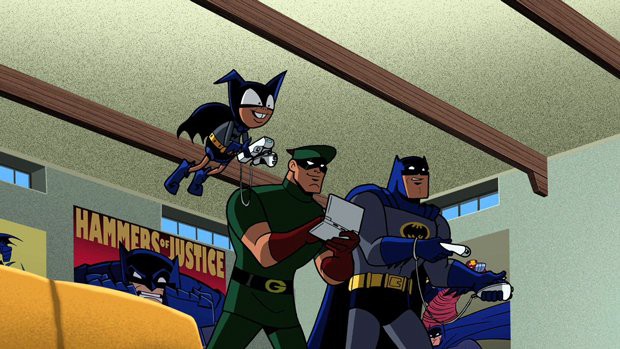