Why I Hate to Love Open World Games 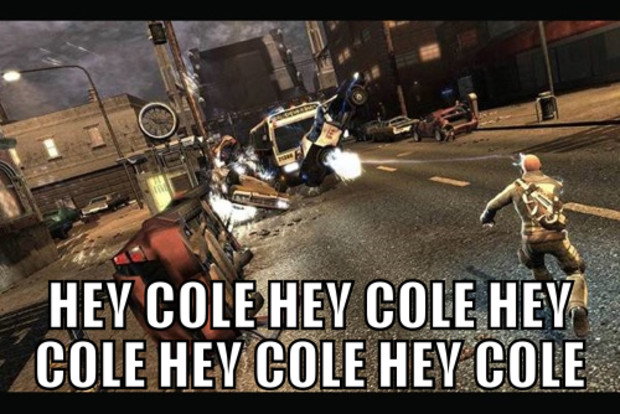 Let me back it up a bit.

To me, the most boring tendency of commercial games is the blanket use of violent conflict as a primary means of �problem solving.�

�Hey, protagonist. We�ve got a problem. You�re just the guy for the job.�

�BLOW THIS SHIT UP!�

The problem I see is that the games that are guilty of this generic brand of gameplay are rarely about violence, they are just using violence as a sort of figurative puzzle solution.

It�s a tricky distinction to make. Think about the Portal franchise. The games are top notch all round, but for now we will totally discount the amazing sound design, writing, etc., and focus on the core gameplay mechanic: the portal and portal gun. In Portal, there are no pickups, upgrades, skills, etc., there is only a portal gun (a totally novel and unique gameplay concept), and an environment with which you can interface. That�s it. This is a game about power unchecked and technology run amuck, and as the player, Portal gives you a taste of that. With a portal gun in your hand, you have quantum access, the superhuman ability to travel across time and space; an ability the game beautifully balances with an adversary who is literally everywhere at once.

Looking at your everyday �shoot-em-up, take over territory, complete missions for factions� open world games, we see a totally different species. These are robust, with tons of different gameplay scenarios, and control schemes particular to those scenarios, menus within menus, skill trees, currency systems, etc. So what are these games about? It can be hard to tell. However they all seem to agree on one thing: a blanket game design that employs a variety of scenarios the player is already familiar with.

The problem here is that the blanket mentality often works against the cohesion of the game; or put another way, the lack of focus in these games often works to underemphasize the strength or novelty of the central game concept, and instead showcases what the player is comfortable with.

Going back to �violent conflict,� Assassin�s Creed is a game that is purportedly about assassins. This being considered, AC is a perfect opportunity to make a game about violence, rather than employing it as a sort laborious in between task. The violence committed against the corrupt church and officials could raise moral of the people. Murder of innocent citizens could generate a civilian fear of the protagonist. A messy assassination could begin to reveal your identity, or create panic, while a clean job may not even affect the awareness of the population at all.

These are all concepts which place violence and �assassinations� at the center of the game, making every �violent� action a significant one, which actively affects your experience as the player. Instead, AC opts to focus on roof running, a silly sci-fi plot, and a generic open mission structure, all while reducing assassinations to a one button affair, and instead emphasizing button mash close quarters combat. To me, the entire franchise has been a huge missed opportunity to make, not just a commercially successful game, but a great one. This is for one simple reason: the game does not know what it does well, or put another way, why it is fun.

A lot of these games are guilty of this, but not always for the same reason. Mercenaries 2 is a game that is a blast to play and features a novel air support system that enables the player to order air strikes or equipment drops on a whim; however, it took me a couple hours to even realize this, as the game held my hand through several generic run and gun missions, complete with cheeky dialogue and stereotypical gangster/capitalist/revolutionary characters, and tried tirelessly to convince me that it was as cool as GTA, before it even handed over the core gameplay concept. The game would be better without the longwinded exposition because it is not what the game does well, or why it is cool; Mercenaries 2 is awesome because I can order a tactical nuke on the headquarters of a petroleum corporation. The shame is that Mercenaries 2 actually hinders the player from finding this out.

Borderlands, on the other hand, knows exactly why it�s cool: it�s addictive and complex gun and loot system. Every step of the way, the loot system, and the combat are the stars of the show. The narrative is present, but non-obtrusive, and if a gameplay concept doesn�t exist to bolster the combat or loot system, it simply does not exist. To me, Borderlands is a masterful exercise in concise game design.

Games like Borderlands, an open world game with a unique identity, and the resolve to showcase it, are sadly few and far between. Open world games too often err on the side of wide appeal and sales, and what they bring to the table is lost as a result, awash a sea of familiarity. Do we really want these similarities inserted into all of our commercial games, as a sort of transitional tool? Is there one game you've played in the last decade wherein you weren't able to guess at least half of the controls or puzzle solutions? Is that really what makes these games successful or, more importantly, what makes us like them? I doubt it. I see it as a fear of failure, most likely on the publisher's side, resulting in a list of "must have" features being shoved down a developer's throat.

Anyways, that is my brick of rant about open world games, a genre that I love, but one that is an unfortunate victim of it�s own success, and is subsequently �template�-ed and uniform as a result. I�m extremely hopeful for expansion of the genre, beyond the GTA-clone, and extremely excited for the developments that are happening now, like the mind-blowing-ly amazing Minecraft, which is one of the few open world games that does not employ violent conflict as the player�s main means of interaction.
#ShareonCommunityBlogs
Login to vote this up!