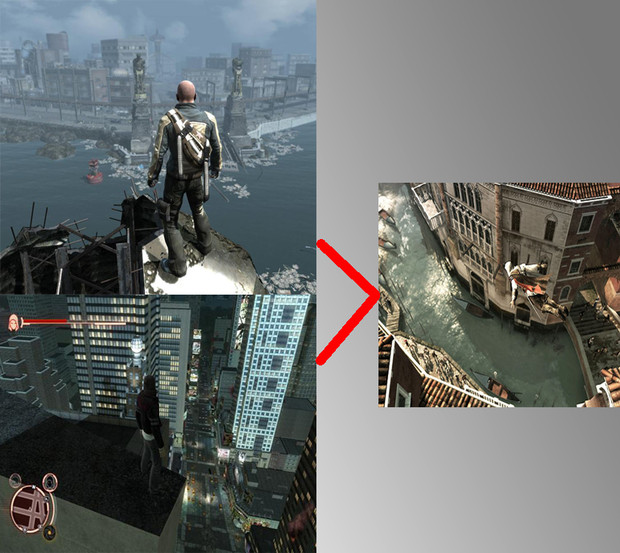 I can't count how many times I "thought" I could make a jump across some balconies but my character failed to do so and stumbled down to the alley below with half his life bar gone to hell. I have to admit I had much more fun playing the other two mentioned games over this in terms of movement and platforming. Basically, it's like they've just polished up the graphics of the first one a little, injected more personality to the main character to make him seem "hip" and "cool" and changed the map from middle eastern structures to European style architecture (which indeed looks glorious).

Sure there are some added mechanics like an economy system which from what I've gathered so far is pretty minimal and unnecessary. They could have just awarded you money or upgrade points for every mission/Side-mission accomplished instead of this whole Villa/art collecting/Blacksmith clusterfuck.

Of course, to be fair the game now seems much more varied from the first one. You have many side missions (although most of them tend to approach the good old "find this" or "beat up that guy" variety) and some of them are interesting enough. The fighting is the same as always with the exception that you can snag an enemy's weapon if you time your attack right. The camera can be a bitch in tight spaces and the free-running challenges (the Assassin dungeons or whatever) are clear portraits of what is not functioning correctly in the game's free-running system. You can Swim now. Which is really just there for the sake of being there but I'm not going to complain about that.

And the novelty of doing Leaps of Faith has but completely evaporated for me. I thought maybe the first one or two will give me that same glorious feeling of rush and vertigo but nope. No matter how high I climbed and leaped, it just didn't feel the same. You also get to find Hidden Treasures which are scattered throughout the huge map. (yay... fun. *YAWN*) The thrill of some of the main story assassinations are still there though. But in games like this you just feel guilty for rushing on with the main events without exploring or doing some side-missions. It IS a sandbox game after all. Menu designs look cool but good luck avoiding confusion and headaches when actually exploring them.

To sum up, as far as I've played, the game is better than the first one. The game is basically the same as the first one but the experience is more fine-tuned although it's now much more derivative. They have added a few gimmicks for the sake of the "2" you see in front of the title. It may look like a pretty flower at first but once you start peeling, don't be surprised if you find some familiar albeit passable thorns. I am yet to see the ending so I can't say if it's as much of a rip-off as the first one. I'll report back when I finish.
#Community
Login to vote this up!