A Mathematical and Inquisitive Approach to VVVVVV

This isn't a review of the game; Anthony did a fine job there. It's just a bunch of thoughts I had when playing it that I tried to develop into something novel. It might sound suspiciously like a review at times, but don't let that fool you. It's just an illusion.

You probably don't care whether or not this is a review, do you?

Well, whatever. It's not one.

VVVVVV is a fascinating game. Both the gameplay and the various elements of the world are both utterly simplistic and incredibly elegant at the same time. It's one of those games that avoids complication by twisting just a few techniques now this way, now that, to unique effect.

The techniques are along these lines: it's a platformer, but you have no jump key; instead, you have a key that reverses gravity for yourself, so that you flip onto the ceiling. You may only flip yourself if you're standing on firm ground (or ceiling), i.e. you may not flip while in midair.

There are enemies and spikes. If you touch them, of course you will die and respawn (instantaneously) at the nearest checkpoint, which, more often than not, is just a hop, skip, and jump--er, flip, flip, and flip away.

One of the most interesting things I felt about this game is how it inverts the ordinary and the extraordinary, the powerful and the impotent. Consider this room that you might see in the game. Note that this and several other screenshots in this post have been edited, because some of the rooms I needed for examples don't actually exist in the game. 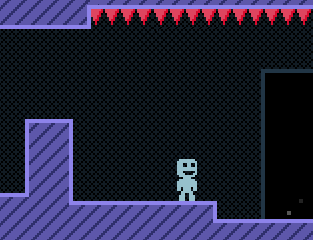 There goes that theory.


I'm starting to lose hope here! Is there anything left that can save this theorem without cutting away all of the meat? Looking back at the original example room, what about it, exactly, is breaking ambitransitivity? There is a flat surface on the left, another on the right, and a step in the middle. It's the step in the middle that causes problems. In fact, if you consider a "room" that is either of those flat portions, there is no problem. So I posit Try 3: if you are able to exit the room at the same elevation (and orientation) as you entered the room, then the room is ambitransitive.

I haven't been able to come up with a counterpoint yet, so allow me to go ahead with my proof. This part is not for the faint of heart, so take heed.

Lemma A (flat ambitransitivity): a single path between any two points on the same surface with no changes in elevation or orientation is ambitransitive. Informally: if you walk across a flat (without any steps) surface in one direction, you can walk back across it the other way. This is trivially obvious.

Lemma B (flip ambitransitivity): A path consisting solely of a single flip from one surface to another in the opposite orientation is ambitransitive. In other words, if you can flip from floor to ceiling safely, you can flip back again to your starting point and orientation. This isn't as obvious as Lemma A, but if you think about it a bit, I think you'll find it makes sense. If there's a weak point in the proof, I think it's this lemma.

The proof comprises two cases to consider. Remember that we are only considering rooms where elevation doesn't change as you go across it:

Case 1: where the elevation never changes in the room. This is just a case of Lemma A, so it's given to be true.

Case 2: where the elevation does change at some point in the room.

If the elevation changes at some point, that means that it must change back by the end of the room.

When the change and the change-back occur, they are necessarily in the form of a flip and a flip back.

If the flips succeed in one direction, according to Lemma B, they must succeed in the opposite direction too, so both flips are ambitransitive.

If there are any flat portions of the room between these flip points, according to Lemma A, they must be ambitransitive.

Therefore, all portions of the path through this room would be ambitransitive.

I've always wanted to say QED and actually mean it. Actually, in writing the proof, I believe that I've stumbled on a much nicer generalization... Try 4: any room that can be traversed by a set of contiguous paths that are either flat surfaces or flips is ambitransitive. That should cover some rooms both with and without elevation changes. I wasn't too thrilled with the restriction before, but this one is all right in my book.

One quick addendum for any nitpickers out there: this theorem doesn't deal with the presence of moving enemies, which can definitely render even one of these rooms impassible from the other direction. I know, because I ran into such a room at some point.

I know there's no practical application whatsoever for this theorem and possible proof, but hey, that's not so different from a fair bit of mathematics, right? I hope at least that it was understandable at all.

Update: In the comments, mospehraict correctly points out that my proof has a flaw, but goes on to prove the "try 4" theorem. Thanks! The text of his comment follows:

For "try 4" I guess we need another Lemma C: "If there is a contiguous set of ambitransitive paths, then the path consisting of this set is also ambitransitive." Proof is trivial for a finite set, but if the set is infinite, I guess it's not obviously true. It also depends on what we define as "passable". If passable means can be walked in finite amount of time, and each flat surface between flips and each flip takes finite amount of time, then there's infinite amount of flips, each taking fixed time, so the overall time is infinite, so the room is not passable, either way. So lemma C holds only for finite sets.

So for the proof to work we need to work only with a finite set of paths. Then we proceed with the proof, ad absurdum. Suppose there exists such a room, that for every finite set of paths it is not ambitransitive. Using corollary C-1, it means that one of the subpaths is not ambitransitive. (It cannot be non-contiguous, because it violates original premise.) But this violates lemma A or lemma B, because each subpath is either flat or flip. QED.
#Community    #Rants
Login to vote this up!