What is the Naked Gun of Videogames? 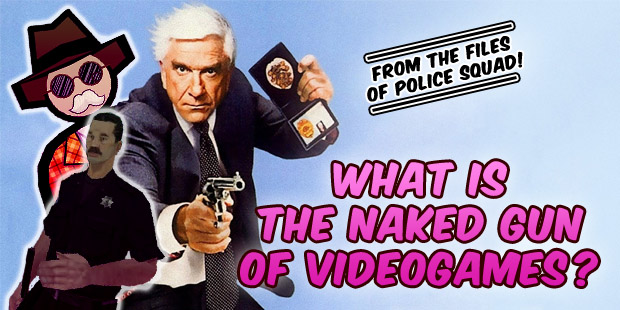 You know, I have a commitment problem. I have an habit of commenting a lot on articles and news stories but I hardly ever spend time posting on a forum, be it gaming-related or otherwise. To give you an idea, the most I ever talked about videogames with other people was on a Jurassic Park forum, of all things.

I keep telling myself that I just don’t have a need to post on a forum yet somehow a lot of my comments turn into elaborate rants and discussions. I’ve lost track of how many times I deviated from a simple commentary into 3, 4 or 5 paragraphs of whatever theory or opinion I had tucked away in the back of my mind. Hell, I spend way too much time rehearsing speeches in my mind to the point where I’m starting to get pretty decent at condensing whatever my point is in a few simple sentences (I’m not quite there as you can see from the length and redundancy of this text, but I’m working on it). I actually enjoy deviating into an elaborate text mid-commentary. 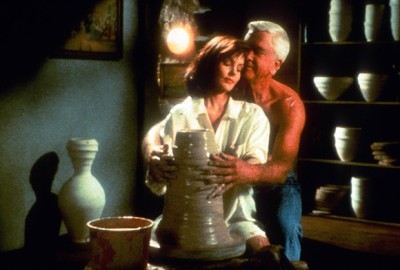 But in an article I can break it up with pictures!

You’d think this would make it easier to write random articles/blog posts here and there. Like I could just sit in my chair, grab a bunch of Oreo knockoffs (bitch, please, Oreos ARE knockoffs) and improvise away a text about the wonders of Typing of the Dead. Funny thing is, I’m more comfortable writing those unnecessarily lengthy comments and typing on the spot as the ideas come to me than actually committing myself to create a proper article. “That takes time! And Preparation! And planning! Everything needs to fit in place an be perfect in order to create an acceptable article.” - I say to myself sometimes, unaware that I’m writing a comment good enough to expand a little bit and turn into a nice little opinion piece.

Basically I need to get better at letting these things happen naturally. Similarly, nobody likes a forced joke.

Now, you may have recently heard of this so-called “comedic game” going by the name of Jazzpunk and how this little Adult Swim/Necrophone Games title is considered by some folks as one of the funniest videogames around and how it is wonderfully filled to the brim with non-sequiturs and delightfully weird jokes. 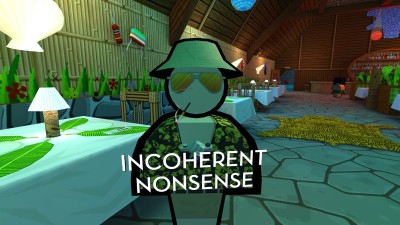 That is a fine game.

However, it doesn’t quite grab me in the way it should. I mean, the non-sequitur nature of the jokes common to nonsense movies like The Naked Gun and Airplane is there. Whatever reaction I receive from the NPCs I decide to talk to is definitely as funny and unpredictable as they come, but somehow it still feels like something’s off. Jazzpunk has a pretty vague definition of objective that has more to do with finding and “executing” jokes (via interaction with NPCs and scenery or impromptu mini-games) than actually seeking any kind of goal via gameplay and receiving the jokes on the side, like, say, Saints Row IV, which, despite also branding itself as funny game, still builds the silly shit on top of the fun gameplay you already expect from the franchise, giving you a conduit for all of that silliness to follow and providing a method to the madness. Fun AND games. In the other corner, Jazzpunk is a first person exploration game in the vein of Gone Home. 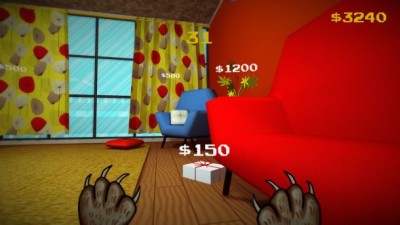 Now, with this I don’t want to say that Jazzpunk isn’t fun. It is, in its own way, but whenever I play it I just can’t shake the feeling that this isn’t so much a game as an interactive gallery. A funny, silly as hell and very good piece of interactive entertainment that does a good job of throwing the player off-balance via clever tricks and mini-games. Every reaction/response that I get from my action (usually, pressing a button to interact with something or someone) is an unpredictable non-sequitur and sometimes I even find myself thrown into the joke itself via a mini-game, literally becoming a player in the calm madness of another person’s Detective Frank Drebin and contributing to the stupidity unfolding. 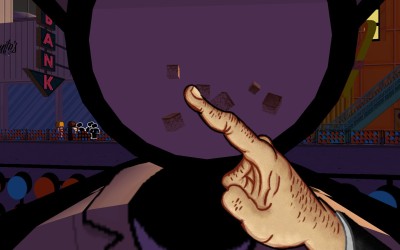 Don’t get me wrong, you should absolutely go on and play Jazzpunk. It IS very, very funny and despite this entire rant of mine I still think it’s a massive step forward for comedy and scripts in videogames and genuinely applaud it for that, but, in my opinion, a big portion of the end product (not all of it, then) seems to present itself more as gallery for the player than an actual game world with naturally occurring funny stuff. It feels slightly awkward, like the game is comprised solely of easter eggs and it’s my job to move from the previous one to the next, joke to joke, pressing A to execute the “surprise”, nod in agreement, take a sip of my glass of wine and move on to the next joke. At times, it feels like a joke that went on for too long, like I just want to progress through the game but I have to constantly stop and look at this or that joke that I couldn’t possibly miss.

To put it in more familiar terms, it’s like being in an adventure game and feeling like you have to click every corner of a room to hear every joke Guybrush as in store for you. It’s funny, sure, but it also feels like a slight annoyance that hinders your progress, even if the sole objective in Jazzpunk is to just look at more funny things. 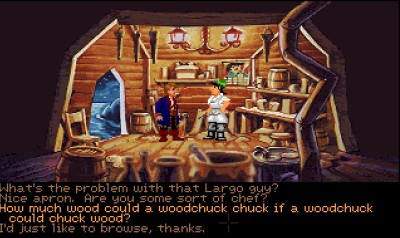 So, what I’m trying to say is that, the jokes in Jazzpunk aren’t forced at all, but the way in which you go around triggering them for most of your adventure might be. Generally, adventure games or first person exploration games work because you’re invested in investigating your surroundings. At the very least you’re always concerned with figuring out just what the hell is going on or how this next piece of information is going to help you. Even if the game isn’t totally serious, you still have a mystery to incentivate you to continue. In Jazzpunk there’s barely a mystery. You’re just there to fill a mental checklist of places and jokes that you already experienced.

Basically, while the gameplay mirrors that of an exploration game, the incentive isn’t quite as strong. It’s an easter egg hunt. A funny one, but still...

Or is it just videogames in general?

Leslie Nielsen’s influence has always unknowingly been a part of the DNA of videogames over the years. Every time an NPC, an event or the rules in a game world “break” and glitch out, something magical happens. 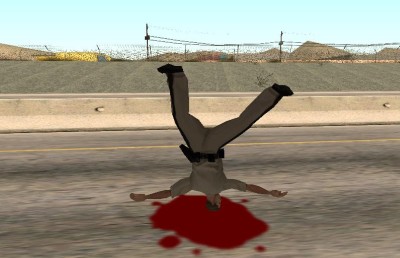 A comedic sketch is born

And the best part is that the game world, and indeed its inhabitants are none the wiser and couldn’t care less about your acts of dark magic. This is why I still love to boot up GTA San Andreas every once in a while and just leave the game running for a few minutes in any given place. The AI in GTA is flimsy, at it will easily break  the illusion of an autonomous city if you just stop and look at it for more than 2 seconds.

Say policeman Jack was driving his car around town and upon hearing shots in his vicinity, decided to get out of his car and make a stand against gang violence. Should someone then accidentally run him over with a car, his nearby partner policeman Joe will have no problem picking up the slack… And continue to drive around with Jack’s car, maybe even running over his remains again, leaving a trail of blood on the sidewalk for good measure. For Joe, it was Tuesday. 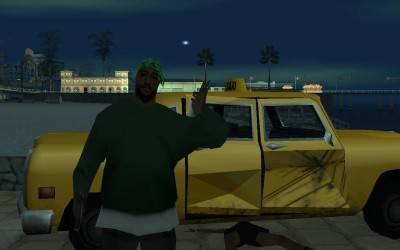 This is the kind of mayhem and complacency that has always made videogames inherently funny, in a way that only movies like Naked Gun or Airplane could. It doesn’t matter how insane things get in videogame world, the NPCs will be none the wiser. I once saw a paramedic give CPR to an exploded car in San Andreas. Have you played Fallout 3? People talk to you even if you hang out with the headless corpse of a Sheriff. People don’t do that in real life. Need I say more?

Actually, I do. Sorry about that. 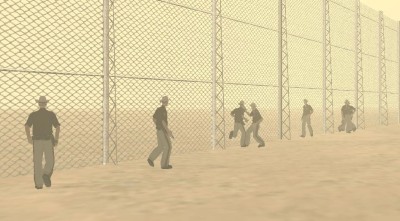 You set out to create something autonomous and before you know it, BLAM, chaos theory.

Getting comedy right in videogames is hard! The humour isn’t so much the issue here (although videogame land could use a lot less irony and a lot more funny scripts like Jazzpunk) as it is how you make the player interact with it. Sure, you can make the player “read a joke” off of a dialog tree or send him on a easter egg hunt but comedy should be more unpredictable and less of a fetch quest, like having characters say funny things to each other during a mission (Saints Row, GTA) or react to your sudden acts of betrayal, or just finding pleasure in simply breaking the world’s rules without a single concerned response (like, say, Goat Simulator, which sets out to make a game out of doing just that). 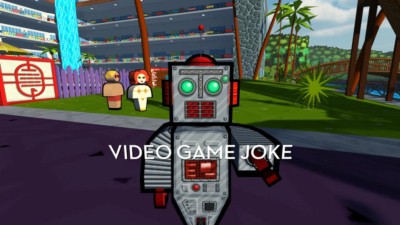