There's a Soldier in All of Us? Gender in Call of Duty's Live Action Trailers

It’s said in life only three things are guaranteed: death, taxes, and a new Call of Duty (CoD) release each year. The imminent arrival of each subsequent installment of the juggernaut first-person shooter franchise is heralded by entertaining live action trailers featuring fantasy gunplay and celebrity endorsements. These short but bombastic videos capture the high-octane gameplay that gamers have, for better or worse, come to associate with CoD games.

Yet the advertising of CoD in live action trailers arguably represents the systematic gender-biases present in video game marketing at large, especially for genres that assume an overwhelmingly male audience, as often the case for first-person shooter games. Even prior to the development of the live action trailers, masculine themes that marginalize women and homosexual men were emphasized in other CoD promotional videos. Let's not forget the time Infinity Ward released a YouTube video in 2009 that disparaged the use of random grenade throws in the game’s online mode as a phony public service announcement sponsored by a ficticious organization called Fight Against Grenade Spam, or FAGS. While the video was quickly removed for its insensitive language, official promotional videos with homophobic undertones clearly stigmatize minorities from the CoD online community. 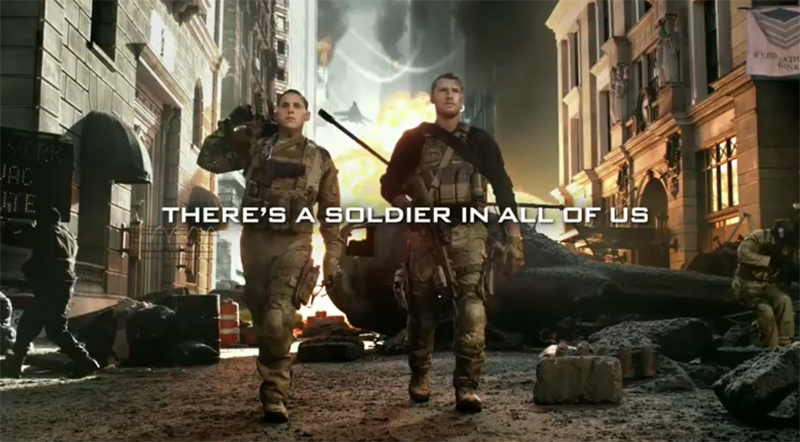 Perfect soldiers? "The Vet and The n00b" specifically hails a male demographic.

Activision, the publisher of the CoD franchise, has consistently advertised new releases for a predominately male demographic at the expense of female representation. I genuinely applaud the original live action CoD trailer for Black Ops (2010) for featuring a diverse range of male and female actors engaging in fantasy gunplay. The trailer showcases a diversity of body types and ethnicities equally kicking ass in an absurd abstraction of both authentic reality and actual video gameplay. Recent live action trailers, however, are noticeably (and unfortunately) less egalitarian. Modern Warfare 3's (2012) live action trailer started the trend in "The Vet & The n00b" which starred Sam Worthington and Jonah Hill in the respective roles of the "veteran" and "noob." Their relationship, in which the veteran trains the novice player/soldier in CoD tactics and weaponary, values skilled performance as a masculine ideal. 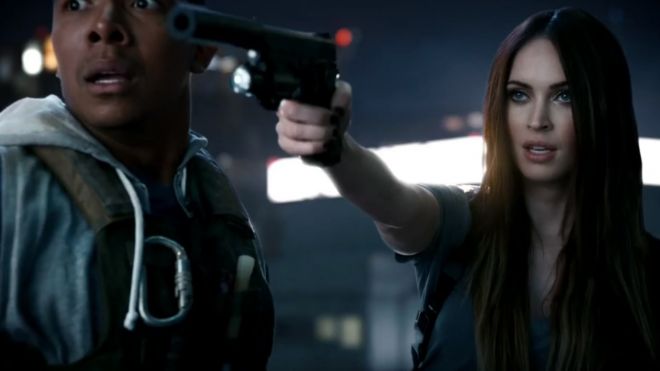 Megan Fox's brief appearance in "Epic Night Out" might be boiled down to eye candy.

Indeed, men are typically active subjects in the narratives of the live action trailers while women are subjected to a male gaze that frames females as objects to be gazed upon. Actress Megan Fox was briefly featured in a CoD: Ghosts (2013) live action trailer titled "Epic Night Out." While Fox is depicted as a tough, competent, and fiercely independent a male character blatantly flirts with her, emphasizing her role as a mere object for male pleasure. The men exit the scene after the male character's unsuccessful attempt at chatting her up and she's quickly forgotten about. 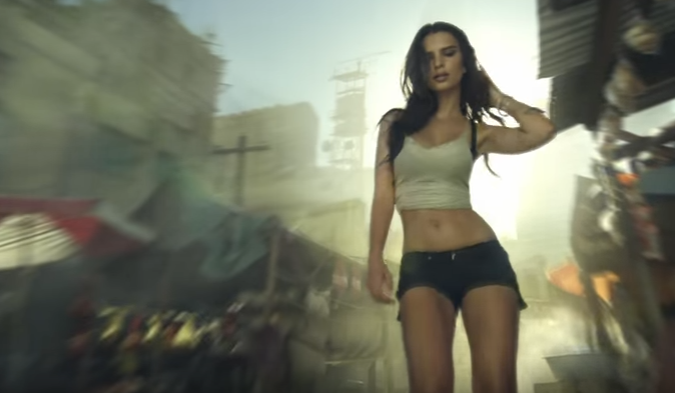 Emily Ratajkowski in "Discover Your Power" is selling sexiness - not CoD.

Roughly a year later, the CoD: Advanced Warfare (2014) live action trailer positions a male viewership to “Discover Your Power” from the first-person perspective. While the actor’s face is never seen the hairy arms are noticeably masculine when the actor runs and guns across an advanced battlefield of the future. In the same video, the heterosexual male gaze is catered by the quick appearance of model Emily Ratajkowski, clad in tiny shorts and a belly shirt, after the character-viewer temporarily blacks out. The scene is used for humor when it turns out that the sexy visage is actually a slobbering goat - in other words, the trailer's only female representation is actually a hallucination. In the world of Advanced Warfare's trailer, power is the exclusive domain of men. 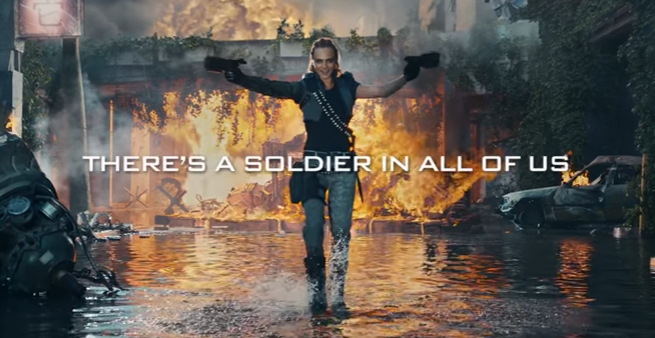 Cara Delevingne's role in "Seize Glory" is an improvement on the formula.

Fortunately, the trend of objectifying women in CoD trailers is shifting, if somewhat gradually. Actress and model Cara Delevingne ultimately dominates the subject of the narrative, a male character named Kevin, in the CoD: Black Ops III (2015) trailer "Seize Glory" but only within the video’s final seconds. Some women viewers may certainly enjoy strong heroines like the ones portrayed by Delevingne and Fox. Indeed, they are framed as tough, badass, and capable of keeping up with the men (Ratajkowski's sexualized appearance more the exception than the rule). Yet it remains that these advertisements offer a variety of masculinities on display – black, white, and overweight – while a particular type of woman, who is beautiful and conforms to a thin ideal, is given enough time and space in the trailers to please a heterosexual male audience, first and foremost.

Male victims of CODnapping recieve access to games, big comfy chairs, and beverage service in "CODnapped." Women are framed as potential obstacles to accessing these privileges.

A trailer selling downloadable content for Ghosts, titled "CODnapped" (a play on CoD and kidnapping), is the most egregious example of CoD as exclusively a "man's world." The trailer depicts a fantasy scenario in which several men are relieved of their everyday burdens by a clandestine military group who abscond them from the likes of attending a business dinner and shopping with a wife and baby. The objective of CODnapping is that these men might have uninterrupted time to play CoD: Ghosts away from their families and girlfriends. In this world, a variety of masculinities are interpellated as subjects while women are not even considered a group who might want to be "CODnapped" from their own mundane existence. Surely the women featured in the video – the female student driver, the wife and mother of a toddler, the girlfriend fussing over her appearance – might also need a relief from their daily pressures?

This November's release of Infinite Warfare (2016) introduced a new live action trailer titled "Screw It, Let's Go to Space." While initially showcasing a number of diverse characters prior to the combat scenes, once the actual fighting erupts women appear far less frequently than men in the one minute and forty-six second trailer. The trailer is a welcome departure from objectifying women yet does little to increase female visibility compared to past commercials. 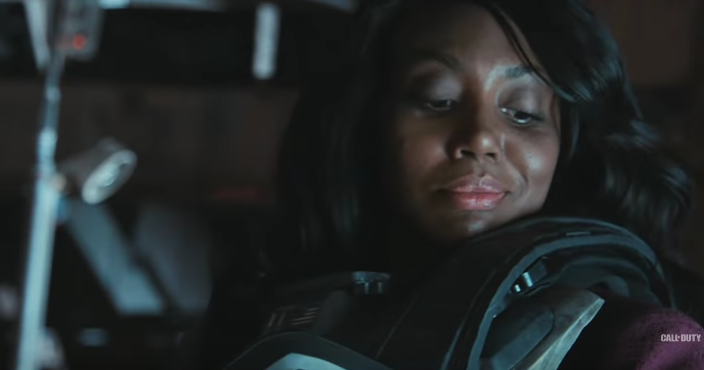 One of two prominent women soldiers who appear in Infinite Warfare's "Screw It, Let's Go to Space."

So, why is this important - why scrutinze gender portrayals in CoD commercials? Especially given the fact that many gamers no longer take seriously CoD as more than just a cash cow? Representation in any medium is always important given that as humans we naturally identify with similar others. And given the contentious status of women in online gaming communities, where harrassment and hostility is not uncommon, would it really harm the franchise to acknowledge women players more broadly, to represent women in ways that disrupt stereotypes? To consider the female demographic as more than just an afterthought? These trailers started strong with Black Ops, dipped to an all-time low with Advanced Warfare, and addressed previous wrongs in Infinite Warfare's recent commercial - but there's still room for improvement. For CoD to diversify the range of representation within the live action trailers would go a long way towards conceptualizing CoD as a game for the “solider in all of us.”

Note: Gender and Call of Duty is currently a topic I am developing and wrestling with for a book chapter on the series. This discussion was originally going to appear in condensed form in the book chapter, which is actually more specifically about gender in the Modern Warfare games and associated fandom, but due to word-count limitations and a desire to have this conversation more broadly, I've decided to share this piece in blog format. And a disclaimer: I acknowledge that I am by no means an expert on the Call of Duty series at large. I've only played Black Ops, Modern Warfare 1-3, and Ghosts.

- I over analyze just about every game I play. Want to follow my ramblings elsewhere? @jess_tompkins_ and jesstompkins.wordpress.com

I like to write about stuff I love and I happen to love video games.