[Warning: This post contains major spoilers for Star Wars: Republic Commando and Call of Duty: Modern Warfare 2. But c’mon, these are rather old games, and if you haven’t played them by now… ask yourself, will you ever?]

A good story and compelling characters can provide players with a sense of friendship and belonging within a gameworld. Parasocial interaction explains that audience members may experience one-sided relationships with mediated characters. In other words, spend enough time with a fictional character in book, movie, or video game, and you might just start to think of them as a friend. I’m of the position that parasocial interaction contributes to media enjoyment; in my case, I’ve found that parasocial relationships with game characters can go a long way to differentiate an otherwise generic game.

With the interactive nature of videogames, the medium is particularly successful at inculcating parasocial relationships. Perhaps one need only reference the “Garrus Vakarian is my Space Boyfriend” t-shirt to gauge the level of attachment some players may experience with fictional romantic pursuits in the Mass Effect series of roleplaying games. But what about games where character roleplay isn’t an option? Or for games that emphasize combat over narrative? Can parasocial friendships with characters make an otherwise generic military-themed shooter more meaningful? 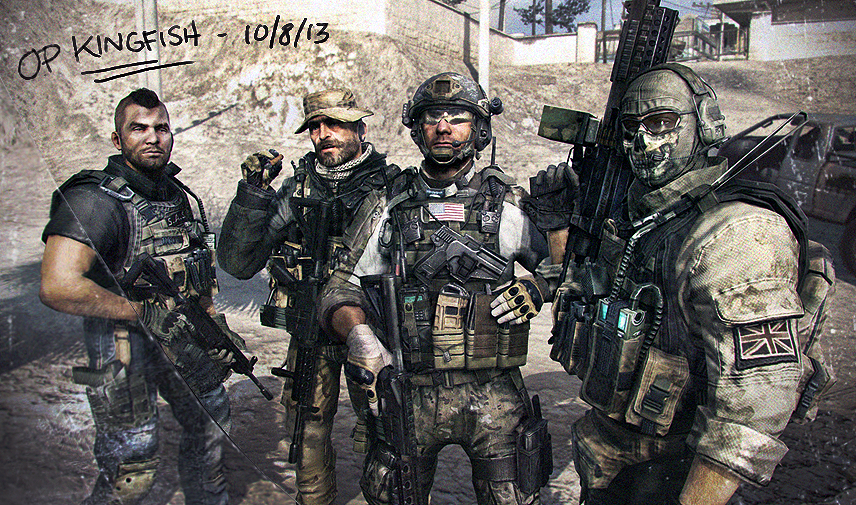 #SquadGoals. The Modern Warfare games are among my favorite first-person shooters... Sue me.

In video games, a parasocial relationship is likely encouraged when a player-character shares a close bond with one or more characters. Military shooters often exhibit themes of professionalism, duty, and camaraderie between the player-character and their allies. These relationships, paired with gameplay that emphasize interdependency rather than independency in the military squad, go a long way towards encouraging parasocial friendships and empathy towards game characters. Importantly, the parasocial bond has implications for plot twists that disrupt the empowering fantasy of the traditional, first-person military shooter game. I discuss in the context of Star Wars: Republic Commando and Call of Duty: Modern Warfare 2.

Star Wars: Republic Commando (2005; RC) is a squad-based first-person shooter (FPS), and probably the first FPS that I ever played and actually enjoyed. Admittedly, this gamer was already a diehard Star Wars enthusiast and sympathetic towards the clones prior to playing the game, but the excellent characterizations of the individual soldiers distinguish RC as particularly suited for parasocial friendship. 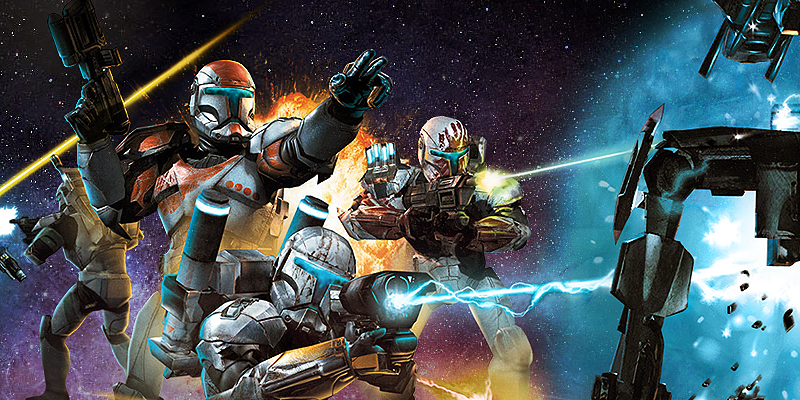 Delta Squad kickin' some droid butt. Photoshop by me, render by n3rdskillz.

When the player assumes the role of Boss, the leader of Delta Squad, they give commands to his clone brothers Scorch, Sev, and Fixer on the battlefield. The player can position each member strategically to combat the enemies as a force. In my experience, RC is far more challenging when this feature is ignored as the mechanic emphasizes the role of the squad over the lone warrior. Importantly, when members of the squad go down for the count, the player can use a healing command to pull them back from the brink of death. Likewise, the squadmates can resuscitate the player-as-Boss, which enhances the interdependency of the squad. These game mechanics, which are fairly standard for squad-based shooters (Spec Ops: The Line also comes to mind), are paired with excellent dialogue between Delta Squad - usually incorporating humor to balance out the game’s rather grim tone - and emphasize the bonds among them.

Scorch: All right, but if I get shot in the back, I'm blaming you.

Sev: Damn, I don't believe it!

Scorch: [Sev shoots a corpse excessively] Sev, did that corpse give you a nasty look?

Scorch: We know, always make sure they're dead.

Good mechanics and characterizations help make RC, or what could have been a generic FPS set in the Star Wars universe, stand out. As a player, I was invested in protecting my squad, not just to win, but because the gameplay and characterizations facilitated a parasocial relationship with Scorch, Sev, and Fixer. And I don’t think I’m the only one, either. In a ‘Let’s Play’ video of the game on YouTube, a gamer tells Scorch to “hold on buddy” during a heal and makes other statements to the squad amidst a particularly difficult assault. While commentary is standard for 'Let's Play' videos, the one-way dialogue directed at a game character indicidates a parasocial experience.

The parasocial bond is intensified by plot twists that disrupt the power fantasy of the FPS and emphasize the vulnerability of life (virtual or not). The expectation for squadmate healing and the “we’re better than the enemy we’re fighting against” bravado is painfully disrupted in RC’s finale. Just when you, the player-as-Boss, expects a beautifully executed victory, Sev goes missing in action. Boss, stricken and devoted, attempts to disobey a military order from the Jedi generals to search for Sev.

Boss: I don’t care if they [the orders] came from Master Yoda himself!

Clone Advisor: As a matter of fact, they did, solider! Now get your squad out of there.

Unfortunately, shortly after this exchange - even though the player-as-Boss might start running back to Sev’s position - the gameplay abruptly ends and a cutscene plays of the forced evacuation of the commandos. It’s frustrating as a player who starts to genuinely care about your squad and the fate of your missing brother, and the loss of Sev packs an emotional punch in the otherwise tidy ending. My parasocial feelings for Sev lingered after gameplay and part of me will always pine for the RC sequel to address his whereabouts. 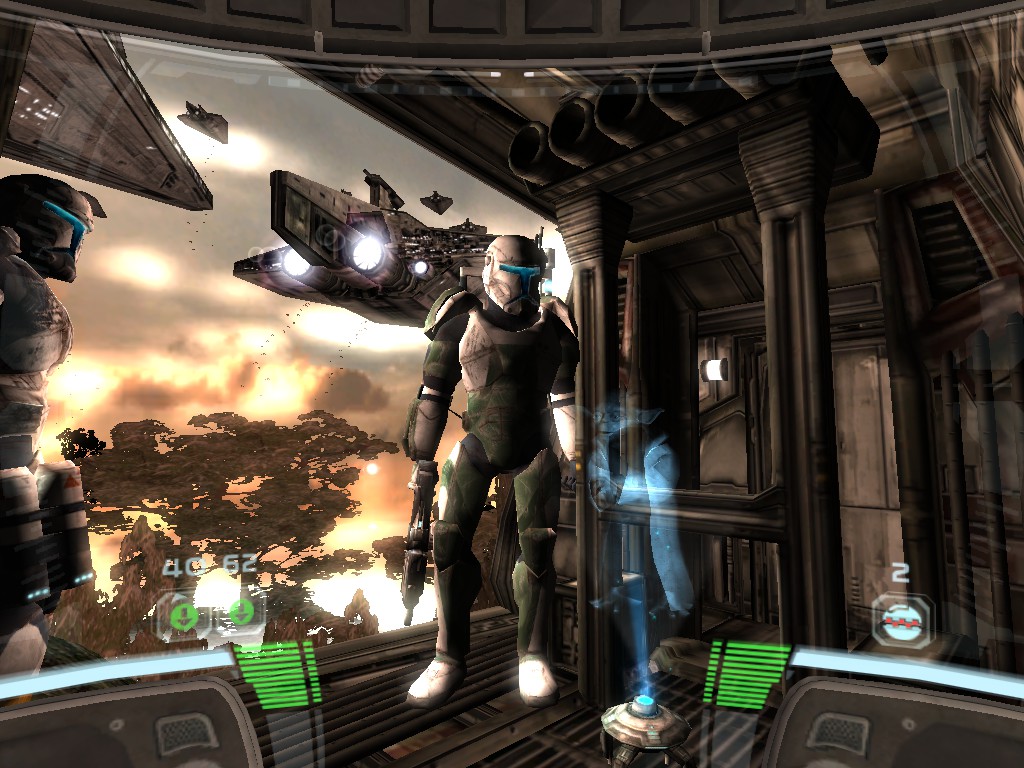 Modern Warfare 2's (2009; MW2) story is easily dismissed as a jingoistic military jaunt but it’s a big-dumb FPS shooter where the characters are generally likeable and the missions intensify the squad interdependency. Although you play as several characters over the course of the narrative, I argue that the most memorable missions in MW2 involve playing as Gary “Roach” Sanderson of Task Force 141, partially attributed to potential parasocial feelings for the player-character’s allies.

At first glance, your superiors Captain John “Soap” MacTavish and Lieutenant Simon “Ghost” Riley look like one-dimensional masculine archetypes: a buff dude with a mohawk and another dude who is so badass he obscures his face with a skull mask and sunglasses. But there is a good amount of dialogue peppered throughout MW2’s levels that facilities an understanding of the bond between these characters that, by means of parasocial interaction, the player might also experience. It probably helps that Soap and Ghost are wonderfully voiced by Kevin McKidd and Craig Fairbrass, respectively, who always convincingly convey the drama of MW2’s story (and damn if their Scottish and English accents aren’t bloody amazing). As an aside, solid voice actor performances certainly enhance believability. 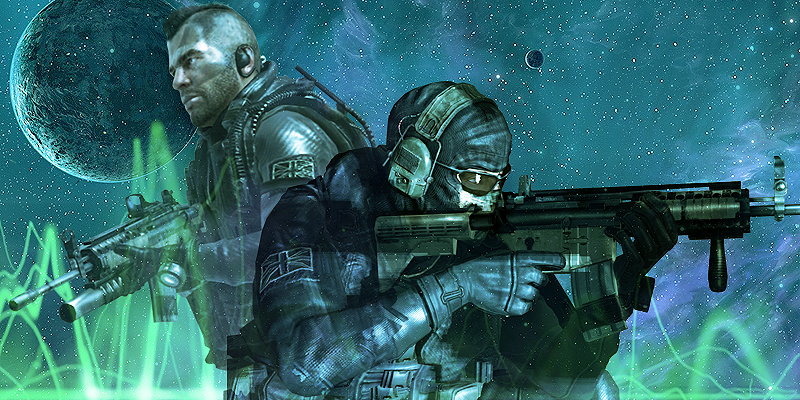 Although the gameplay of MW2 is not nearly as active as RC, in which you play the squad leader issuing orders, your mission objectives are integrated into a cooperative framework. The below exchange is just one example of the teamwork exhibited in the Task Force 141 missions. If you’ve played the game, compare how the dynamics change when you’re in the role of Private James Ramirez of the US Army Rangers, constantly following the orders of Sergeant Foley. The dialogue of those levels spawned an entire meme, after all (Ramirez, Do Everything!). Foley isn’t so much a parasocial friend as he is an announcer of game objectives. Interestingly, this is not unlike my experience with the first MW - I can recall most the British Special Air Service missions but remember little of the US Army levels, aside from “Shock and Awe,” largely because the SAS squadmates are particularly memorable.

Captain MacTavish: This is it! We go in, grab Prisoner 627, and get out! Check your corners! Let's go! [Mactavish, Ghost, Roach and Task Force 141 enter a control room and engage the hostiles positioned there.]

Ghost: That's the control room up ahead! I can use it to find the prisoner! I'll tap into their system and look for the prisoner! It's gonna take some time!

[Ghost hacks into the control systems. MacTavish, Roach, and the rest of the team go down into the first level and engage hostiles while looking for the prisoner.]

Ghost: Alright, I'm patched in. I'm tracking your progress on the security cameras. [Ghost continues to provide remote support to the team as the others search for the prisoner.]

Not unlike the disappointment of losing Sev in RC, an unfortunate twist in MW2’s campaign disrupts the power fantasy at the same time it cinches a parasocial bond. In a harrowing mission to retrieve intel at a terrorist safe house in the level "Loose Ends," the player is constantly bombarded with waves of enemies. When the extraction team arrives heralded by the overseeing General Shepherd, the player-as-Roach must flee from another round of approaching gunmen and mortar fire, only to temporarily blackout after a near-hit by a projectile.

A cutscene interrupts the gameplay, the camera revealing that you-as-Roach are being saved by your lieutenant, who frantically tells you to “hang in there.” Gameplay resumes and you’re able to return the enemy fire for a brief moment as Ghost literally drags your avatar to apparent safety. Another cutscene displaces gameplay, as you see through the eyes of your wounded avatar, clinging to Ghost, as they approach the landing zone. Only the relief is quickly replaced by shock and horror as General Shepherd shoots Roach at point blank range, followed by the man who just risked his own life to save your avatar.

Just when you think you've won...

While this moment is one of the most infamous in Call of Duty history in terms of frustrating plot twists, the near seamless blend of point-of-view cutscene into gameplay that concludes with another point-of-view cutscene, as you see the final moments of your dying avatar from first-person perspective, is powerful in terms of narrative impact and produces an affective response in players. Just try to find a YouTube video of this scene that doesn’t include a “nnooo! ghost and roach are still alive!!!11” comment; those parasocial feels are real. Additionally, taking revenge later on Shepherd as MacTavish is particularly satisfying.

When I reflect upon these experiences of virtual valor in military shooters, there’s also a salient sense of belonging when the characters are convincing and well written. The parasocial bonds encouraged by memorable characterizations and engaging gameplay complement and reinforce the strong narrative impacts of RC and MW2. The unexpected disruptions of power fantasies, traditionally embedded into FPS games, are enhanced by parasocial feelings which mark the loss of characters like Sev and Ghost as particularly meaningful. While these stories may seemingly offer little of value in providing deep insights on the moral and ethical implications of warfare, I actually think they’re rather successful at illustrating the painful costs and sacrifices of service (even at the expense of absurd plot twists).

The analysis offered here clearly glosses over some of the problematic themes embedded into these narratives. Surely one could argue military shooters - even in the Sci-Fi realm of Star Wars - glorify war, support the military industrial complex, and sanitize violence. But that’s another discussion entirely. My analysis here assumes that games are played for entertainment and are usually interpreted as such by rational humans, and that along the way, it might be possible to consider parasocial bonds in games as something that enhance storytelling, even within usually formulaic genres.

- I over analyze just about every game I play. Want to follow my ramblings elsewhere? @jess_tompkins_ and jesstompkins.wordpress.com

I like to write about stuff I love and I happen to love video games.