Is there really a proper way to play House of the Dead 1 today?

It's kind of crazy to think that we're only now just getting a remake of the first House of the Dead game. Despite the franchise's enduring popularity and the many opportunities SEGA had since then to bring this game to other platforms, the original has instead been largely neglected and forgotten to time, with the Windows port serving as the last time HOTD1 ever saw an official home release. That came out around September 1998, so about roughly 23 years or so, but hey who's counting, right?

I guess it's not big a deal at any rate, since both newcomers and old fans alike will soon have an excuse to revisit the game on modern hardware, and that's all you can really ask for! But there were a few things I noticed in the reveal trailer that, while not dealbreakers certainly stuck out for me. Things like the different music and sound effects, the considerably darker and more desaturated-looking environments, and having the aiming done using the analog sticks, were just some of the oddities that I noticed. Now these are just small quirks and could very well be changed in time for the final release, but if nothing else it did get me thinking...

"Is there really a proper way to play House of the Dead 1 anyways?" 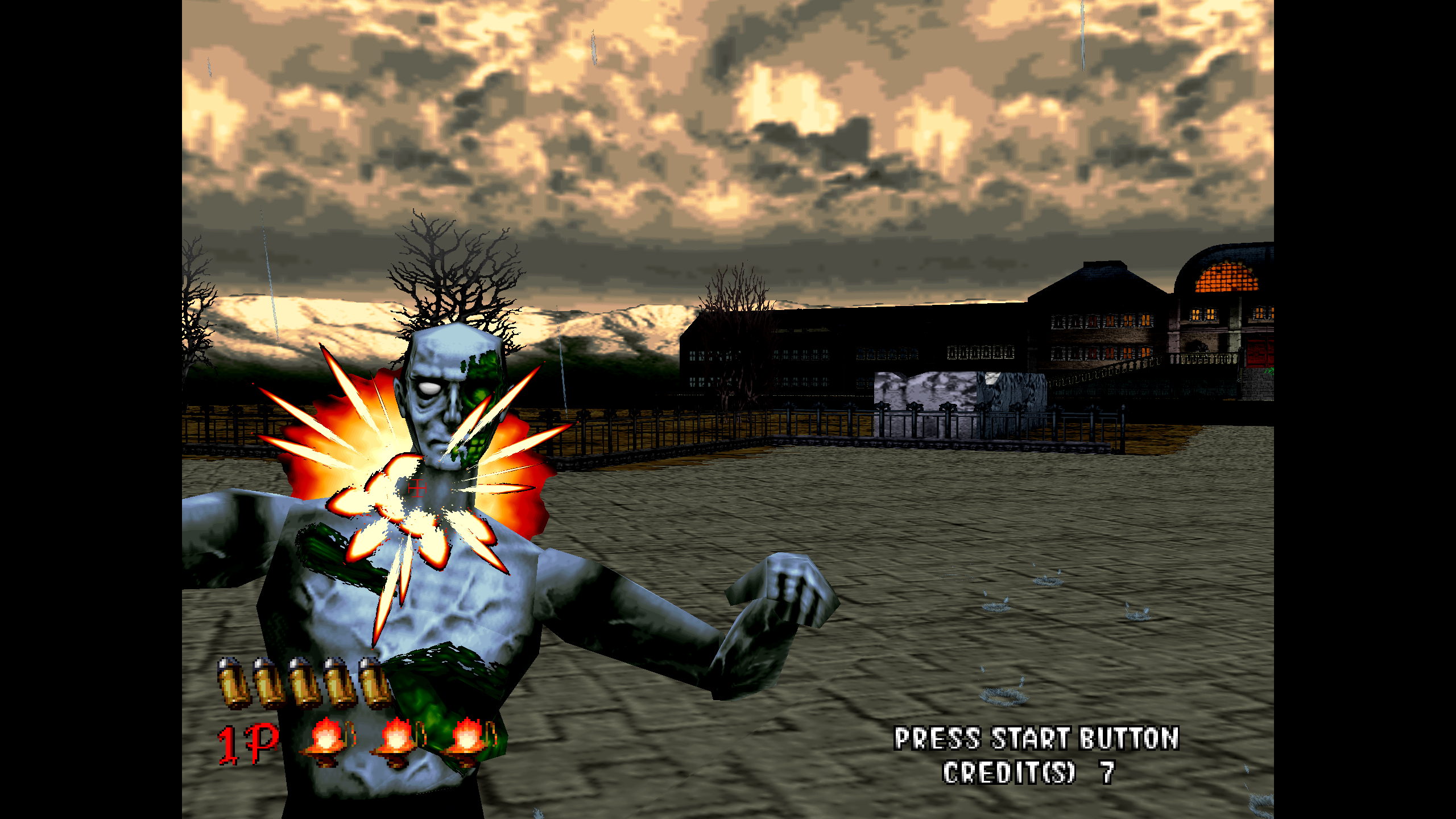 It's a thought that's been picking at me after playing the arcade, Sega Saturn, and PC versions back-to-back recently, and honestly I don't know if I even have an answer for it. Each version has its own pros and cons when it comes to playing them on modern hardware that it's tough to view one experience as being that much worse than the others.  Like you got the arcade original, which is easily the best looking of the lot with its vibrant and high quality character models and environments, and it still looks gorgeous when played at higher resolutions.

But the downside is that unless your local arcade still has a machine lying around or you somehow got enough cash and space in your house to make way for a working cabinet, the only way you'll likely be able to play this version nowadays is through emulation. Whether due to a case of SEGA losing the source code or just a lack of interest on their part, this version was never brought over to platforms like the Dreamcast, Wii, or PS3, and that's a goddamn shame since the currently available home ports suffer from massively downgraded visuals in comparison. 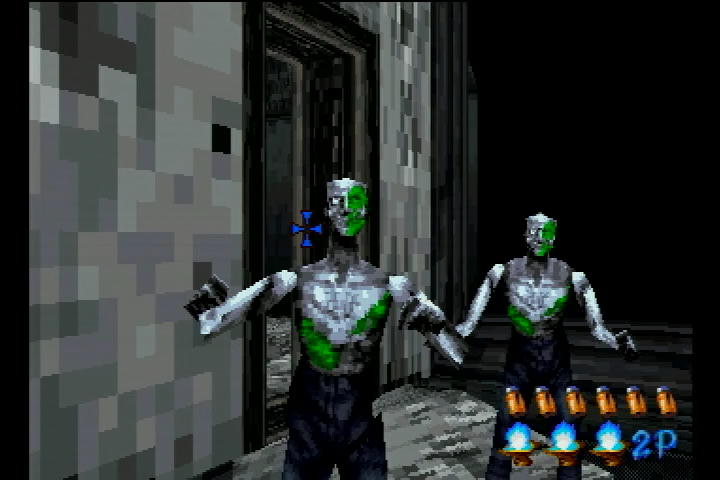 Unfortunately, compromises had to be made to bring House of The Dead to home platforms (Saturn Version pictured here).

Assuming that emulation isn't a touchy subject for you though, that you can deal with flashing lights as a remnant of this game's light gun-roots, and that you don't mind tinkering with settings to make the aiming feel just right, then you'll basically be set since this is version as good and as close as it gets to playing a simple remaster of HOTD1 today. Playing with the mouse can make the game easier (at the cost of feeling like murder for your fingers), but if you want to get something closer to the modern day arcade experience, then you could probably spring for something like one of those those Sinden light guns (Haven't gotten one to test on these games yet, and I'm not that knowledgable about the state of PC lightguns). Alternatively if you don't have the cash you could probably just get a Mayflash Dolphin bar and a cheap Wiimote to hook it up to your PC. It doesn't feel great to play with since the Wiimote's B button doesn't work great as a trigger, and aiming never quite felt smooth either, but hey it works.

It'd be easy to write off the arcade version as the only way to play HOTD1 then, but that doesn't mean that the PC and Saturn versions are worth ignoring completely. Yes, they don't look anywhere near as good in comparison and have no shortage of technical shortcomings either, from framerate drops and inconvenient loading screens on the Saturn, to compatibility and music issues, and a max resolution of 640 x 480 on the PC. But they have their own additions that to some extent make up for their flaws on a technical front. Since there's only a few key differences between these home ports, the one you'll want to play will likely depend more on your personal platform of choice more than anything, as they're basically like for like in terms of visuals and content. 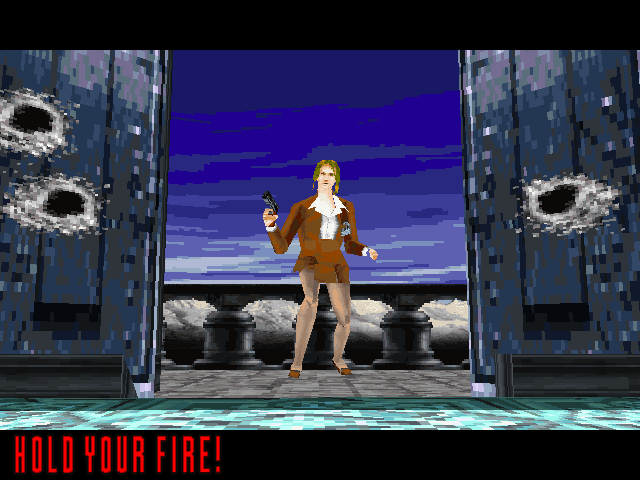 Ever wanted to play through the game as Sophie? Thanks to these home ports, now you can.

Both versions include a boss rush mode, and a gametype that allows you to choose which character or "class" you'll want to play as. These don't alter the dialogue or impact the story in any way outside of a simple model swap during cutscenes, but they each have their own predefined loadouts which which makes them stand out. One character for example has more ammo and health but their weapon is basically a peashooter, while another character has less HP but an ultra powerful gun with only two slugs in the chamber. It may not seem like anything groundbreaking, but these add just enough spice to make repeat playthroughs feel different.

And hey, on the PC version you can set the blood color to whatever you like. So if you wanted to blast through zombies with pink blood like something straight outta Danganronpa, then this version has your back. 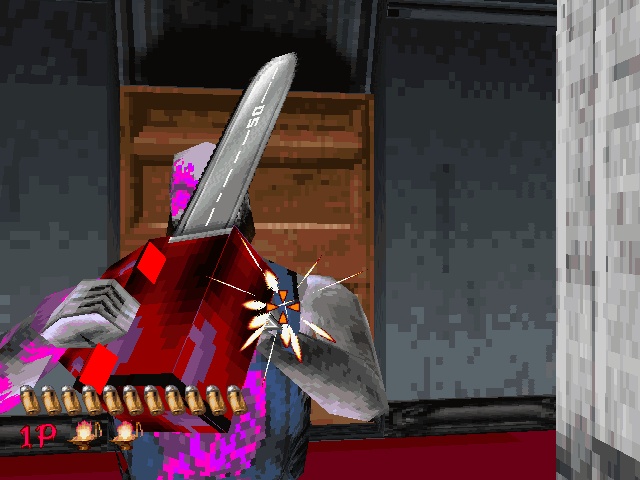 But the downside is that replicating the arcade experience on the PC is just as a pain when emulated, and even more so for playing on the Saturn. Hope you still have a CRT and a Saturn light gun lying around, and if you dont well I hope you don't mind paying the price for one on ebay. That's not even getting to how copies for the the Saturn release can head into the three digit price range, importing a copy from Japan will hurt your wallet less (Menus and voice acting are in English, there's no reason NOT to), but then there's the cost of having to get a solution that can by-pass the Saturn's region locking. PC prices aren't great either, but at least it's abandonware at this point.

If there's really anything you should take from this long-winded, rambly blogpost, it's that there isn't really a "definitive" way to play House of the Dead today. Do you want a version with the best visuals, or the most features? Even then are you willing to put up with potential compatability issues or the costs of trying to get something close to an arcade experience at home? Here's hoping that the upcoming Switch releases changes that for us, but right now we'll unfortunately have to wait and see.