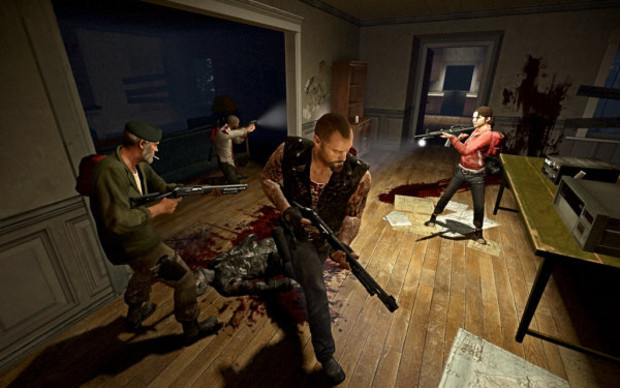 I want to know if I'm being a curmudgeon on this but I hate running zombies. I loathe them. I'm of the old school mentality that zombies are infact slow dumb rotting pieces of decaying flesh hell bent on eating fresh human flesh either because they like the taste, or living human tissue helps regenerate and keep them alive much like regular food does for us. It's why even though zombies are the work of fiction that I find books like "The Zombie Survival Guide" to be hilarious in their detail of something that will never happen but millions of people are fascinated by anyways.

I can't remember who said it, but someone had disparriaging words about Zombie fans on this site, saying stuff about coveting and reading up about the Zombie Apocalypse as if it were a real thing. This is why personally I realize as a fan of zombies that they are themselves a work of fiction and why I find that the "high octane version" of Zombies the movies nowhere near as satisfying as the video game version.

See, I love George A. Romero's early films, both Night and Dawn. Heck I like the later films up until Diary. However I'll take it one step further and I say I just like George A. Romero's work mostly. From Martin to Knightriders to Creepshow to name a few I've followed his pursuits past the zombie genre. He's an "okay" film maker but nothing really grabs like his early zombie flicks (well except Martin, I think that's fantastic but that's me).

With that in mind though I've come accustomed and admittedly prefer the slower bigger threat in more numbers type of zombie flick. However again it's become a fundamental shift in cinema where slow zombies were no longer "exciting enough". Now they must be marathon runners. I'll be honest, I abhor the Dawn Of The Dead remake. Well I abhor most remakes for being more new content than familiarity but that's a different blog. So now movies have become more "flash and bang for your buck" rather than a slower pace. I guess I can accept that but I don't have to like it.

However the concept works better for me in Left 4 Dead. Why? It's because I'm actually involved in the action. In a movie, the running zombie seems shoe-horned in there for action as apposed to before where zombies were more based upon the strength of the human element of superiority fallacy where we start making mistakes and leading to the inevitably our extinction through their own hands, the zombies just help us along with it. Running zombies add a new level of threat sure, but their movies just seem so throw away and less engaging.

Maybe I'm being unfair in that respect, but I find that it works so much better in a video game and perhaps that's where I'm a hypocrite because as I'm involved and I see my various team-mates taken down by special Infected in Left 4 Dead there's that sense of urgency I just don't feel in the movie version where I can get to and help my team mates. Heck it's not even so much the fact that the Video Game wins out because the zombies "run" because they themselves don't really act the exciting part. It's the various problems you encounter through the level with Special Infected that makes it all the much better.

I dunno, I've rambled, you've attempted to read, what do YOU think on both fronts?
#Community    #Rants
Login to vote this up!