It's called Okama Crater Lake and it's located near Mt. Zao in Yamagata Prefecture.

Basically, it was a 1 hour bus ride up the top of the mountain from Yamagata's train station. We rode up at one of the later departures, about 1pm. The return bus was going to be at 4pm.

So, we arrive at Zao Temple.

We can see the lake from several vantage points, but we decided to go as far as we possibly could without falling off the cliff face the temple sits on. 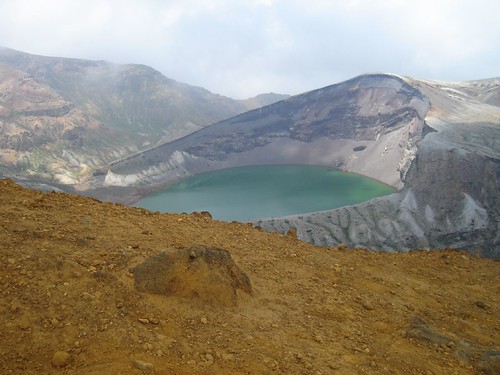 This is really one of the two best pictures I've ever taken in my life. It was so amazing to see and was such a cool contrast of foreground and background colors.

So we venture from the "lakefront" over to the temple to try and get some other choice shots.

That's when the fog rolled in. 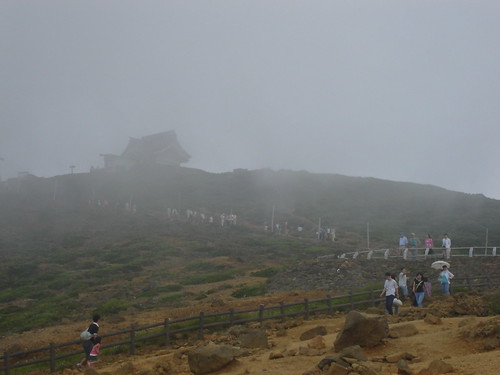 There's nothing like beating a path up a 30 degree incline in 85F degree heat and muggy fog.

Once we get to the temple, the temple isn't much to see. It's a temple, on a hill. Looks cooler from afar, especially cloaked in fog.

We get to the top, and there's a rock garden, and apparently some emergency snow shelter on the rock face. Of course I slip and fall next to this thing. There's nothing like risking life and limb to get pictures like these. 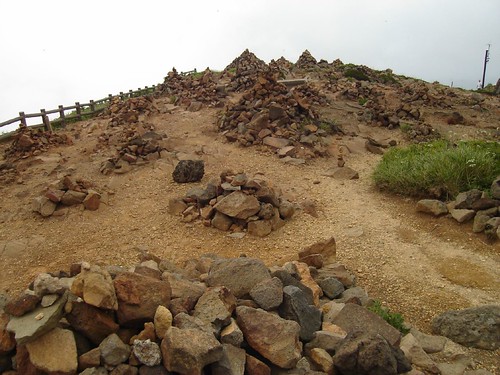 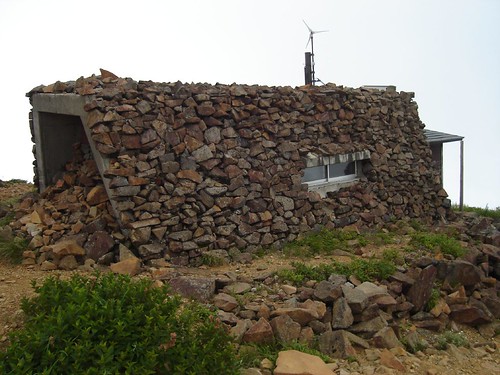 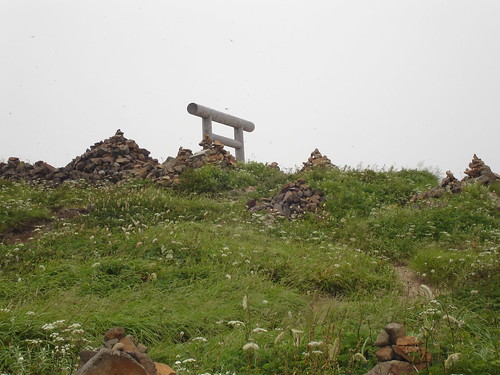 And what's the one thing you GOTTA do in a rock garden? Rock out, of course... 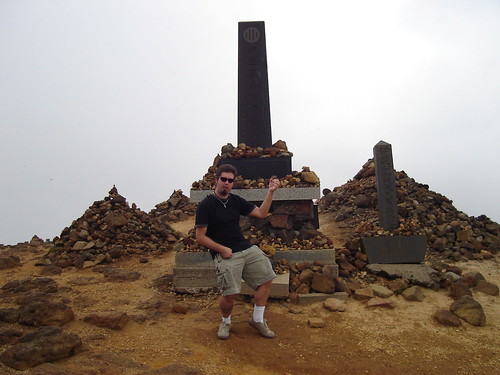 Fenris in his best "cock-out" stance

So we hit the gift shop, grab some yakiniku and roasted corn from a vendor and head to the bus depot to grab a ride back. It's about 3:30 about this time, so we figure we've got plenty of time.

Well, guess what. The bus schedule we'd looked at said that's when the bus arrived in Yamagata. It ARRIVED back at it's point of origin at 4pm. We missed the last departure. The last bus of the day left Mt. Zao at 3:20, not 10 minutes before when I was busy looking at brochures for Mt. Zao Inn in german.

The next bus wouldn't leave for Yamagata until THE NEXT DAY at 10 AM!

So, we went to every other chartered bus that was there in the station.

Nobody was going to Yamagata.

So faced with the possibility of being stranded, we did what any stupid foreigner does. We started talking to creepy looking strangers who spoke no English. SUCCESS! Someone's going to take us to Yamagata! It was apparently 100 miles out of his way, but he'll do it. Great! But, we have to wait 3 more hours till he's ready to go. He's a photographer there to take group photos of people. Unsure of what our ensuing ride would be like with Mr. Photographer, Fenris and myself decided to arm ourselves with protective armaments to dissuade Mr. Photographer from becoming a forensic rape scene photographer with our dead raped bodies. Fenris found a pencil with a sharpened pointy tip. I found a really pointy rock that was arrowhead shaped. We got in the car and waited. Turns out, the drive back was totally uneventful. Not even a molesting. Bah. I held onto the rape rock, fearing it would be needed and I was wrong. We tried to give the guy 2,000Y for taking us back. He declined it.

The Japanese are cool, and very generous.

We arrived back safely, vowing to always read bus schedules and never allow this to happen again.

That's it for now. Make sure to catch the 10th segment where we get stranded someplace else.
#Community
Login to vote this up!