Well, I really can't into details about all that, but suffice to say, they never found the ice pick and I got to stay the rest of my time in Japan without deportation. Japanese prisons are not fun. So, that next day, I decided to take a trip down to Tokyo, visiting Harajuku and Akihabara.

As soon as I get off the train, I spot a local celebrity family. 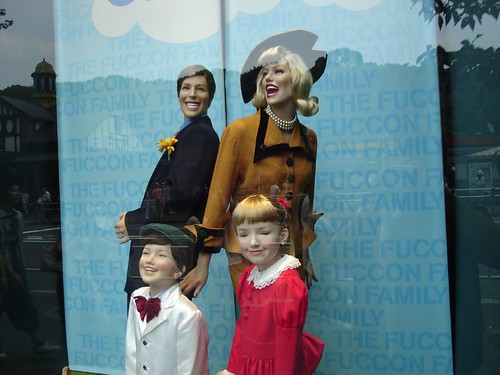 I figured a picture was the best way to greet them and approach them as celebs. They refused to sign autographs, which is typical of celebrities when they hit the big time. Mikey's autograph goes for around 200Y which is like a million dollars in US money.

After parting ways with the local celebs, I turned my attention to the major destination in Harajuku.

Being that it was August, there were 4 cosplayers there, and unless you're really into Rocky Horror rejects there's not much to show you. Instead, I offer this photo of some maid girls wandering the streets of Yamagata in search of Gokkun Kimochi or something like that... 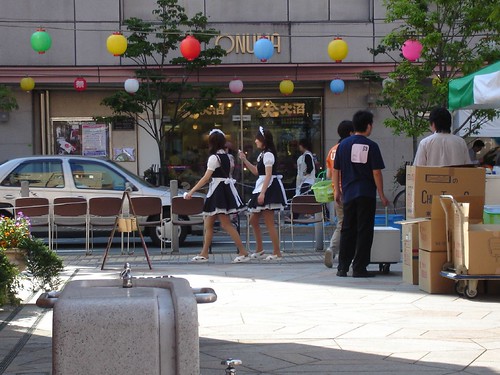 Maid girls are Japan's crack whores, they troll the streets looking to serve tea to anyone who'll drink it. Quite sad, really. 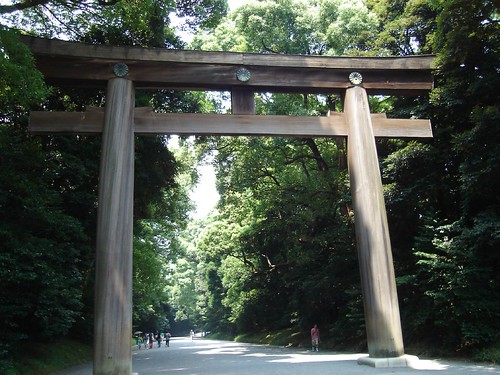 Big-ass Tori gate marking the entrance to the path of the bathroom.
Note: There is a line forming already. The Japanese love line-standing.

While in line to go to the toi-rei they offer you a variety of snacks and drinks to aid in your wait and need to pee when you get to the toi-rei. Note: You're allowed to pee anywhere you want at all if you're drunk. It's Japanese law. 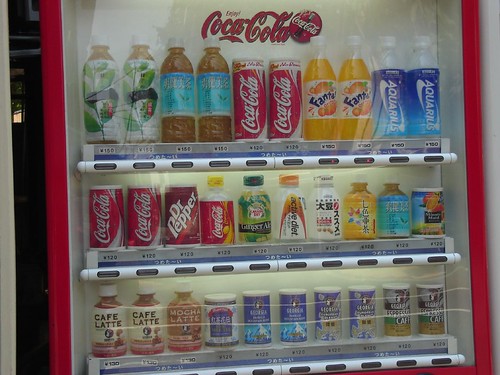 After clearing the bathroom line, I made it to the Wish Tree. What is the wish tree? I dunno, but it's 500Y for a placard, scribble a prayer on it, stick it on the tree, and the next day Santa comes to visit with sailor outfits and video games. I think. I didn't part with the 500Y to find out. 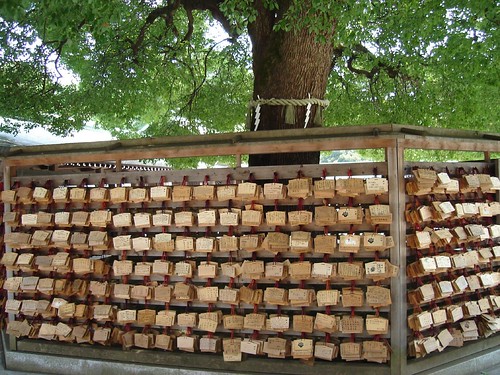 Wish tree, seen before Santa and the elves arrive

After hitting the Tree, I felt the holiday rush hit me, so I ventured out onto Takeshite Street.
I was mildly disappointed with Takeshite street because there were nigh, few, if any places to take a crap out in the open. I had originally figured, "It is Japan, and they do have the market cornered on poo toys and scat fetishes..." but this was not meant to be. Instead, I found the street crawling with teenagers and ruffians. Scads of 'em. All over the place. All buying up the latest ironic tshirts with nonsensical english phrases on 'em. Babies covered in glitter, and really stupid signs. 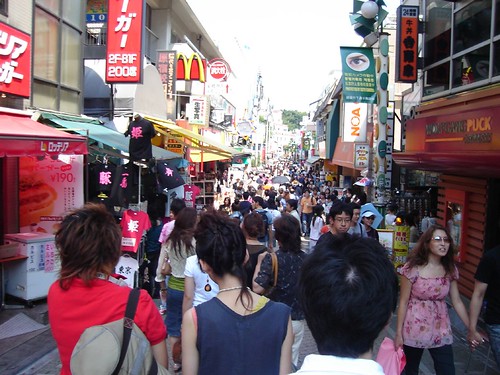 Takeshite street. It's a lot longer walk when you're xenophobic and agoraphobic. If you're not, it's about 300 yards or so. 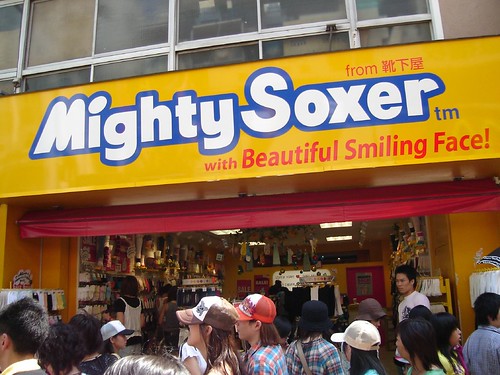 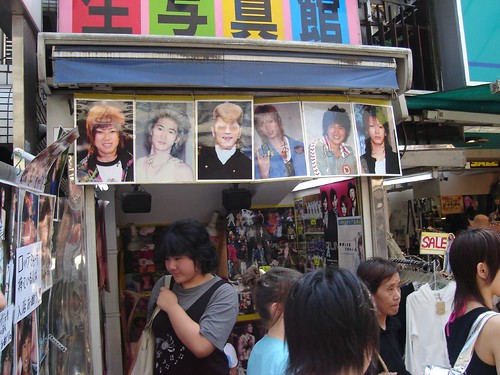 Glamor Shots for dudes in Japan, I guess. And just like the US, they have retarded people that have no business looking "pretty" doing just that.

After locating a Subway in Japan, and finding out what Japanese for "Turkey Sub on Wheat, Hold the Mayo and Onions" was, I decided to head over to Akihabara. 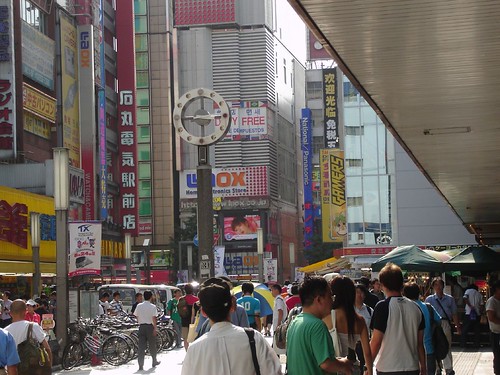 Akihabara from the train station. It may not look like much right now, but just you wait, there's magic in this part of town...

The infamous Club Sega is quite easy to find and frankly, I can't recommend you go there. They're very picky about who gets to go in and who doesn't. I roll up in my best Red Overalls and Plumber's Cap, and they show me the door. I even offered the door guy some 'shrooms, but nothin' doing. Then some bitch rolls up flashin' his fuckin emerald rings around and shit and gets in immediately. Posers. 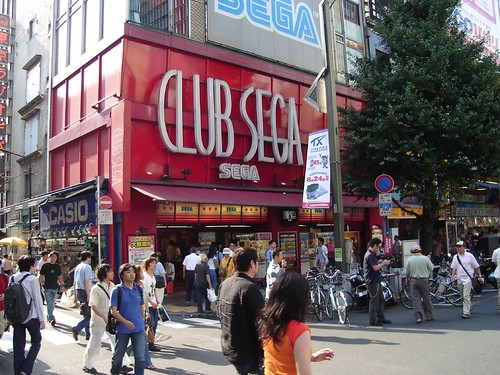 So, instead, I spent the next hour wandering the streets, looking for the elusive duty-free shop called LAOX where I could buy fabulous tax free items like WALK-MANS and KA-ME-RAS. 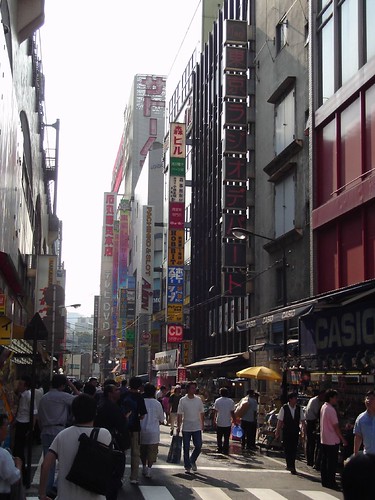 More to come. In Part 4, I discuss getting stranded in the prettiest, middle of nowhere, ever, with no way to get home, and the gentle touch of a middle aged Japanese pervert.
#Community
Login to vote this up!