So, I wake up my second day to find out that they're holding the Hanagasa Festival over the next 3 days in Yamagata.

The Hanagasa festival is some sort of festival involving flower hats, dancing, and everybody in town being in a parade. For 3 days straight.

It starts at 6pm each night and runs till about 9pm. Unfortunately, it's only 9am right now, so we've got a whole day to cover so far.

So, we start off looking around for things to do early in the morning, like shopping, eating breakfast, and taking pictures of old things that hold no meaning to me since I don't know Japan's feudal history.

First up was Kago Park. 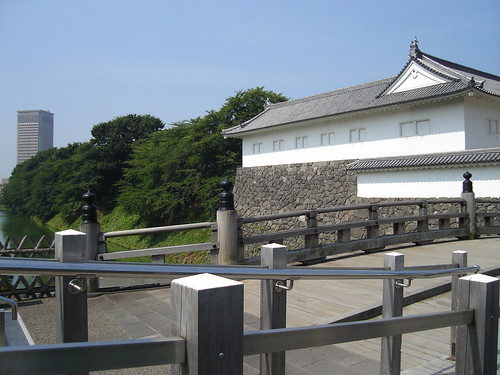 This park is actually a retired castle. The grounds (not the castle) are open to the public and you can walk around and look at things like gravel, statues, and houses. 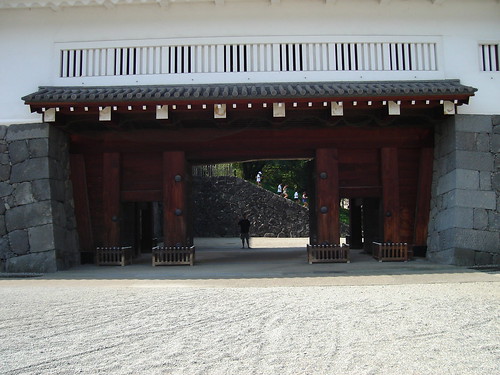 for a sense of scale, Fenris is standing in the middle of this structure. He's 5'10".

Nearby the actual castle is the very first hospital that was built in Yamagata. You can tell they implicitly trusted modern medicine because they adorned it with wiccan symbols. 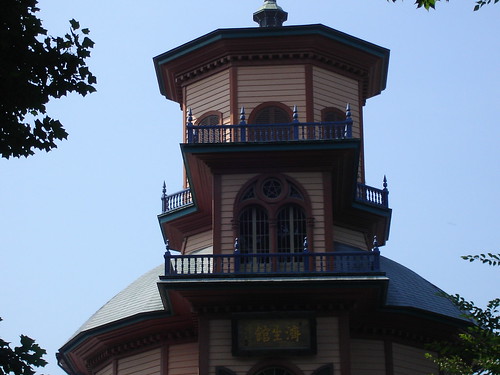 Yes, there is a pentagram in the middle of that window

Also nearby was a statue of the very first Samurai to be able to ride a horse on two legs.
There's Japanese efficiency for you in action. 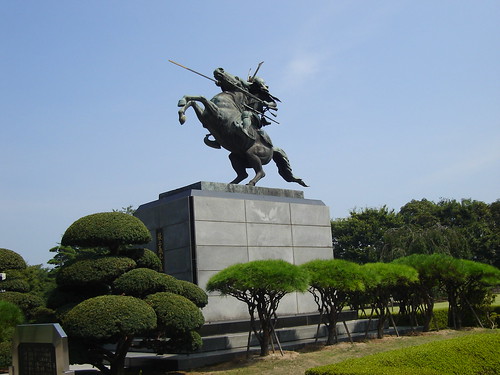 After hitting the park, we cruised by Tully's Coffee, the closest thing to a Starbucks in town. The Japanese don't believe in breakfast. They believe the first meal of the day should totally bypass delicious foods like waffles, sausage, bacon, or omlettes, and jump straight into nasty shit like seaweed, miso soup, and hard boiled eggs and fried squid.

I think the Trix rabbit would have a fucking horrible time trying to convince me that fried squid is part of a nutritious breakfast...

So, across from Tully's was a local knickknack shop with a very unfortunate name. 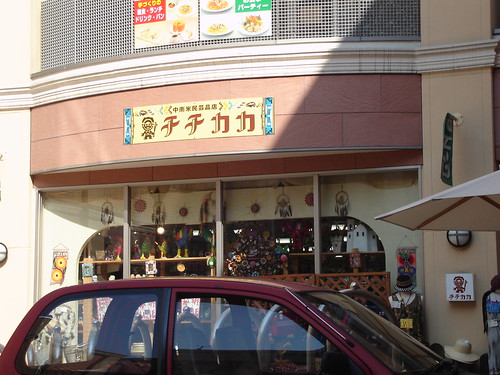 The name translates to "Chi-chi Ca=Ca" I'll let your mind wander from there...

From Breakfast, we headed over to the local department store. The store has a movie theater in the top floor, and we got to go see Episode 3. 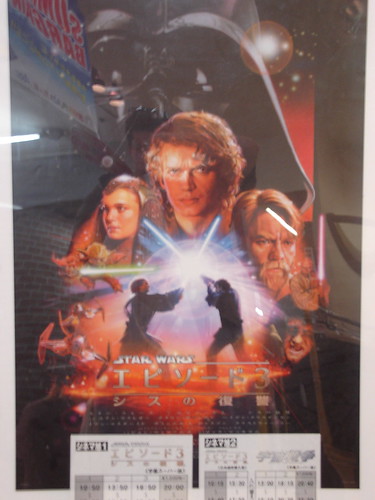 We cruised the store looking for cheap shit to buy. They have a 100Y store there, which is basically a $1 store. The 100Y store is awesome. It actually has REALLY cool shit there. Not like Crestor cyanide flavored toothpaste and Chinese lead paint toys, no, like real china sets, ornate bathing supplies, umbrellas, and scented folding fans. 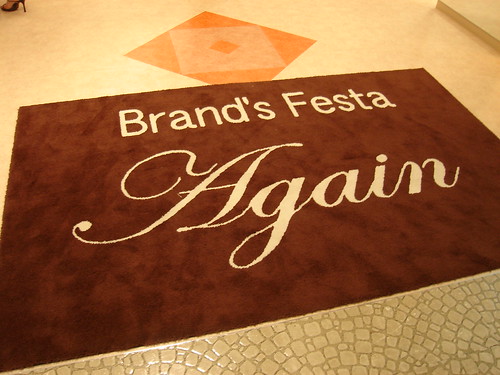 This is their exit floormat, thanking you for shopping. AGAIN!

We found a few interesting departments in the store. 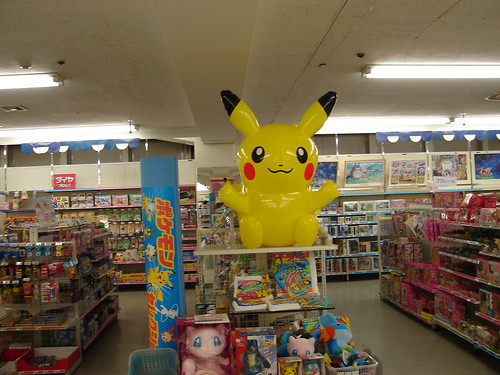 The arcade floor. (all video games!) 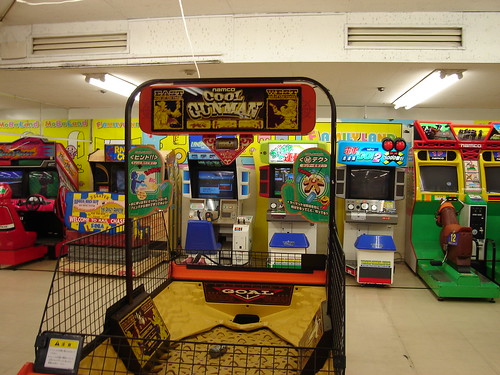 The creepy mannequin aisle for kids. 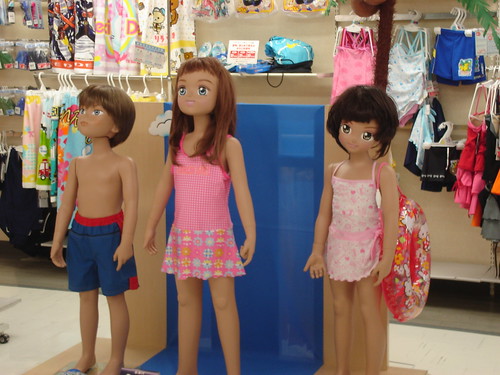 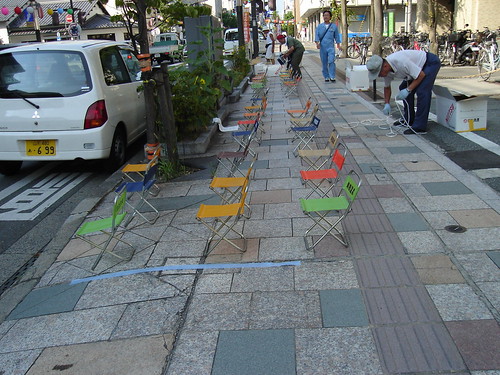 And then we found the beer vending machine. Oh sweet mercy. A machine that will serve you beer, as much as you desire, at 200Y a can. Get this, they have a beer there that has no hops in it, so it's not exactly a really dark or bitter beer, but it'll get you fucked up for cheap. How cheap? 100Y a can. That's a $1 a can, folks. Tastes like Coors or Miller Lite. 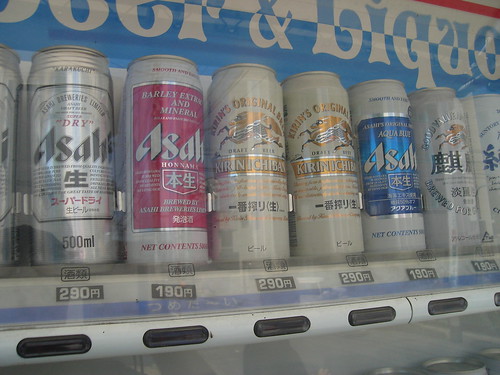 So, about then, the Hanagasa festival was getting into full swing. How does it work? Well, there's this flower hat thing...

And you're going to dance with said hat, men and women, in a dance that's very reminiscent of the line dance that accompanied "Achy Breaky Heart" in the 90's. The song they play is an ear splitting tune sung by a girl, that's about 17 minutes long. After the song ends, they have the exact same song play again, this time sung by a guy. 17 minutes later, after the men's version is over, the parade stops for 3 minutes. Then it all starts up again. Girl version, guy version, pause for 3 minutes. This carries on for 3 hours until the last float goes through town. People cheer like mad for this because EVERYONE in town participates in this thing. 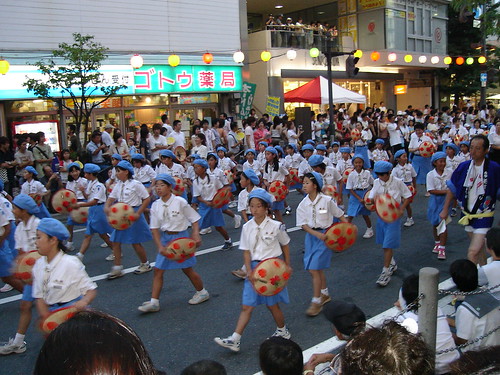 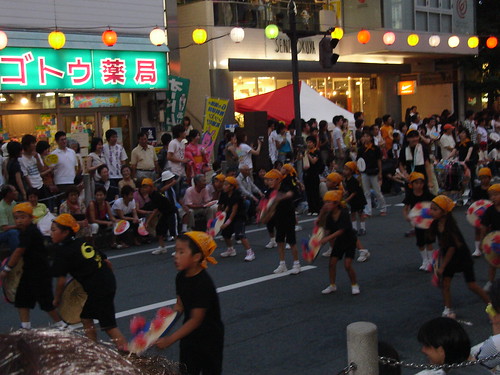 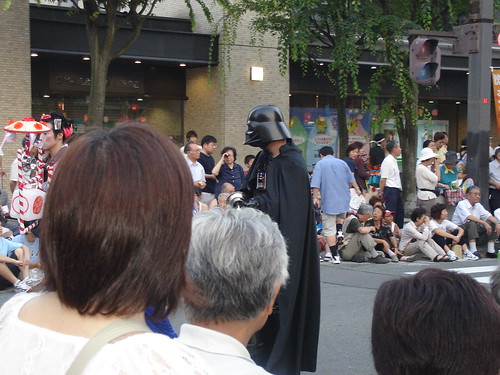 And you see that there are people that wear kimonos, too. 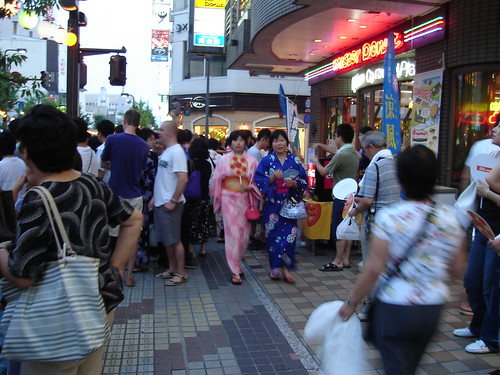 I found out that you are not supposed to eat these things called Taco Balls. Taco balls are not actually mexican food. They're pressed squid balls. Not testicles, but ball shaped squid treats. Like chicken nuggets but foul smelling.

Not at all what you'd want when you hear, "Taco-yaki" come out of someone's mouth.

So, to wrap up the evening, I was given an ice pick by a local in a restaurant and told to show everyone how crazy Americans can be. (continued in part 3.
#Community
Login to vote this up!