1:01 AM on 09.18.2007 (server time)    0
As a final send off for Niero, as I'm sure he's about to find out, I wanted touch briefly on the topic of actually GOING to Japan. For Niero, if he's not taking a multi-leg flight with stopovers in Pawtucket, Reno, Omaha, and Cheeseton, WI; he can expect a nice lengthy sit. From Texas to Japan it's 13 and a half hours. Florida's a good extra 2.5 hours by my best estimate.

I'd done what Niero's doing tonight and decided to stay up all night. And at about 5am, I chugged 2 Red Bulls.

I failed to remember that caffeine takes about an hour and a half to kick in for me, so I fell asleep, right in the middle of Gigantor (adult swim really doesn't want you staying away through this show) at 5:15. I woke up at 6:30, ready to be driven to the airport. I flew out of DFW, even though I live in Dallas, it was easier since I'd have a dogsitter with my parents, and American flies direct to Tokyo. So, I had a ride to the airport, caffeine kicks in at 7 am about 30 minutes from the airport. I'm vibrating and shaking like a madman. 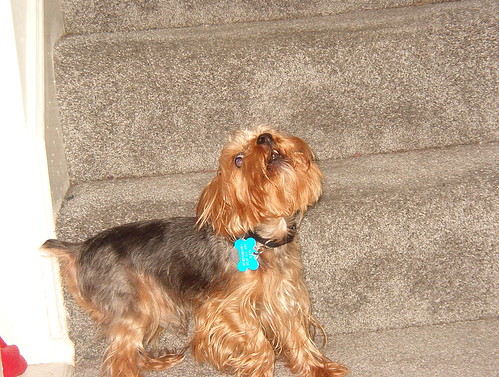 I contemplated just burying him in sand up to his neck on the beach near here, but the ASPCA was eyeing me for a whole week when we did dry runs at low tide.

Is it exhaustion? Nerves? Caffeine buzz? All 3? I dunno, but I was the most exhausted, awake, nervous, and rock steady I'd ever been all at once.

The flight left at 10 am so I had two hours to kill, staying awake the whole time. About 20 minutes before take off, we finally board. I popped some sleeping pills after getting situated. I was looking forward to sleeping on the flight. At 10:15 we backed away from the gate, and set up in the air.


12:00 The flight attendant wakes me up to ask me if I want pizza. YES, I LOVE PIZZA! Especially on an hours' sleep. I LOVE AIRPLANE PIZZA AT 12 PM. ONLY.

I eat the tiny pizza (slightly bigger than a Bagel Bite, and just as flavorful) 2:00 Done with PSP. Played all my emulated games and ready for some ipod.

3:00 I desperately start listening to Japanese language programs in a last ditch effort to try to relearn 2 years of language in the next 8 hours.

3:15 I give up on Japanese language tapes. The phrase book will have to do.

4:00 I start watching Madagascar. It's nearly over. Everyone Loves Raymond is on, too. Ray Romano isn't funny, ever, but actually causes physical pain when you want to sleep but can't. 4:30 Friends. Oh, I hate Friends too. Chandler is the second in line to die after I get Ray Romano.

4:35 Dinner? I dunno. It's shrimp sushi and maguro sushi. Eh. Tuna and Shrimp are alright, but when your previous meal was a cardboard pizza disk, it's underwhelming.

5pm The movie thing has to reset. Nothing for 10 minutes.

5:10 Madagascar starts over. It's 5pm in Dallas. 7am in Tokyo, the next day. I'm still exhausted.

As some sort of bonus tormet, we can watch our map as we travel. Slowly drifting towards Japan, and then the earth rotates and then we're 20 miles further away. I fiddle around with the camera. 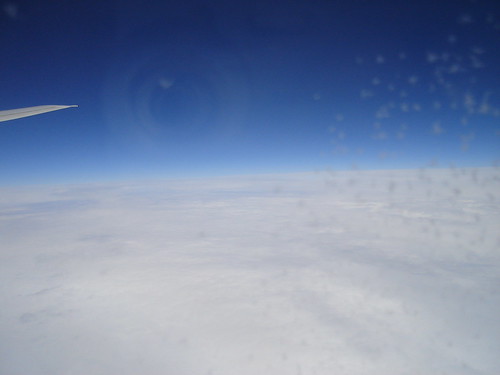 Pacific Ocean, as seen on TV's Lost, but from 2 miles up.

I will back pedal and comment. The plane is basically empty. Business class is pretty full, but coach back here has like 23 people for 150 seats.

6pm 4 more hours. Home stretch? I guess. I don't want my PSP battery to die. I have maps loaded onto it as JPG's.

7pm You can buy whiskey on airplanes. How about that?

7:30 Hammacher Schlemmer is like a rich uncle who invents shit you'll never need or use, but find to be entirely practical despite their high cost.

9pm I've been staring at this fucking map thing for the last half hour. The Madagascar thing is shut off. Don't want people to see the movie more than twice, eh?

12:15 am sidetracked by random Godzilla attack, we resume our descent.

3:30 collect bags
3:45 customs again. They totally miss the beer I brought with me on the plane. Sweet.

4pm I have my train tickets, going to Tokyo.

See you cats all for Part 7, where we explore mountain lonliness and rape rocks.
#Community
Login to vote this up!