There. See, that was easy.

I'm jumping ahead a day here to day 4 of Tokyo because this day was short but very memorable, and very cool. Not that days 2 & 3 weren't fun, just that this was WAY neater in terms of what we did and it was a singular event, as opposed to the 30-40 things we did on day 2 and 3.

About 20 minutes west of Shinjuku by train is a suburb called Mitaka. Everyone needs to get this place on their must see list. Mitaka is home to the Studio Ghibli Museum. 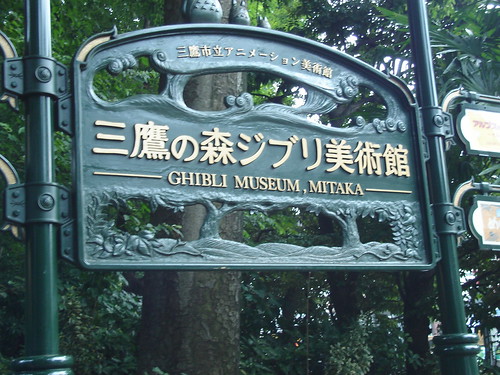 Studio Ghibli is a animation studio spearheaded by Hayao Miyazaki, an animator who has been likened to Walt Disney in terms of feature animation.

Some of their movies are:

Basically, if you say you have any interest in anime, you probably have either seen one of his movies, or you're just a big faker.

Anyway, the Studio Ghibli Museum is a facility designed to pay homage and preserve Miyazaki-san's art for the public to come see and experience.

When we arrived in Mitaka, we disembarked the train, and paraded outside. Mitaka is a small suburb, so it's main train station is pretty much it and the town builds out against the train station. To get to the museum, we had to board a bus that would take us to the museum. But the big struggle was, WHICH BUS!?! 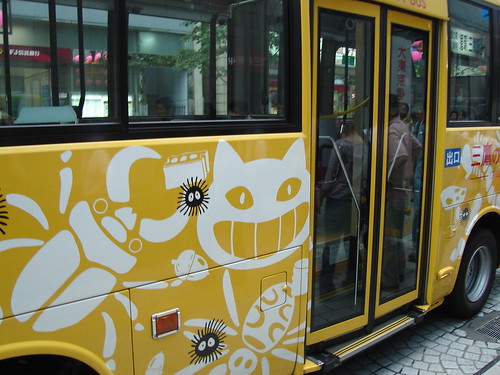 So many city buses and this thing. WHICH DO I RIDE ON?!

So we boarded the bus and took the little trip over to the museum.

Now to actually get in the museum, is quite a conundrum. See, they have a ticket booth...

But the guy selling tickets is strangely quiet and unresponsive. 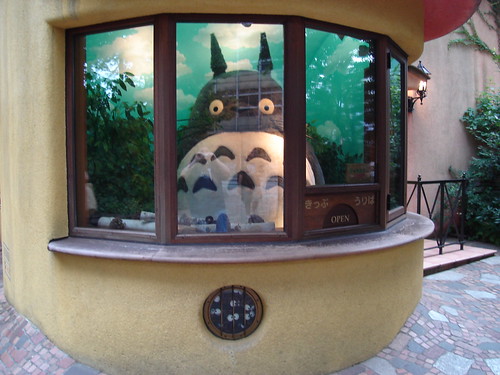 I'm not kidding, this is their ticket window. This guy is it.

Since he isn't going to help you, how do you get a ticket? Well, you have to prebuy your tickets well in advance. How? Either find someone in Japan who can get you in (that's what I did)
or go here...

Basically, if you show up at the door, you ain't gettin' in. Nice thing though is that when you go, for $10, you get a damn good tour of Miyazaki's mind and imagination.

When you get in line to get in, they validate your ticket and then give you a frame of film from a random Miyazaki print (I got Kiki's Delivery Service, Fenris got Spirited Away) 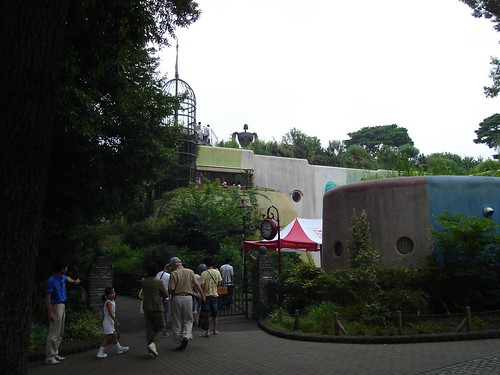 The line to get in

They have a strict no-picture-taking policy in effect and they will boot you out if they catch you taking pictures inside the building. Outside, go nuts. 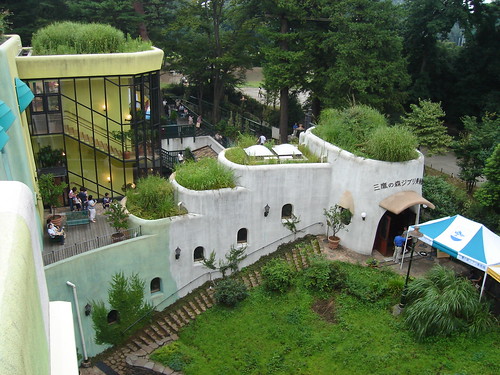 Overhead shot of the place. Entrance is on the right.

For a place so packed full of people, it's easy to get inside.

What's to do in there?

Well, there's a pretty self explanatory visual history of Miyazaki's work, from his earlier work on a television version of Heidi, up through (at the time) Spirited Away. It was all there to look at, early pencil drawings, his first desk he drew on for Heidi, real props inspired into cartoon versions, clay sculptures of the robot from Laputa, etc. It's all really neat. They sell a $30 DVD of the museum tour since you can't take pictures. And it's region 2. Yeah, pass...

On top of the museum there's a small garden area, rest area, and a giant life sized version of the robot from Laputa.

He's kinda a big deal there. 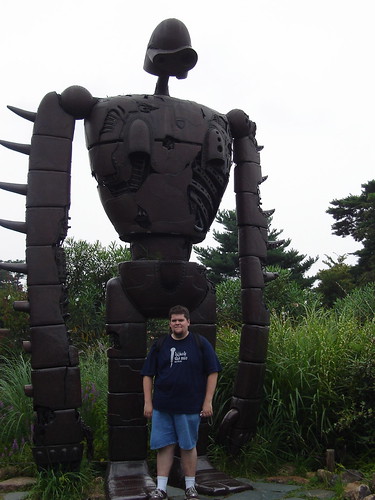 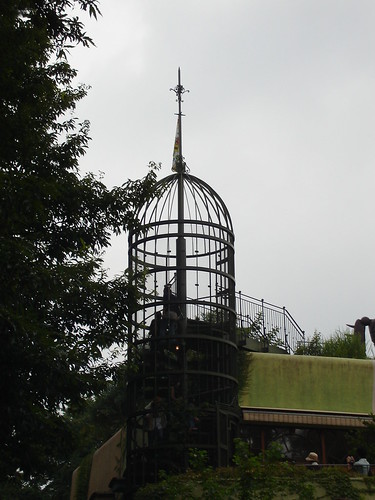 View of the roof garden from below 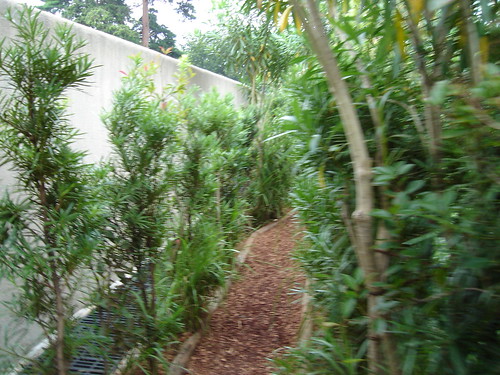 This is the ONLY picture I managed to take inside of the facility. It's not much, but hey, it's cheaper than the $30 region 2 DVD they sell at the gift shop. 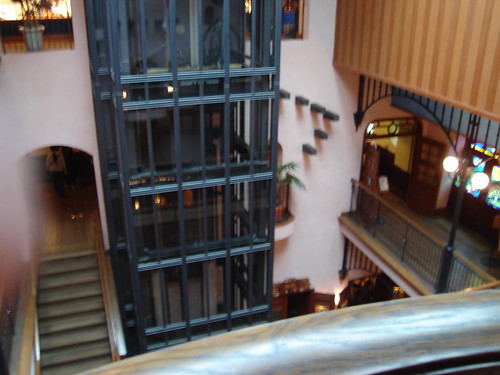 So, what else is there to do in the Museum? Depends on your love of Miyazaki and your age group.

If you're under age 8, there's a Totoro Catbus to play on on the top floor. The room is closely patrolled by no one at all and makes a fine place to get your kid kidnapped.

If you're under age 13, there's a small theater showing a short film based on My Neighbor Totoro. Your ability to enjoy this will depend on if you don't mind not having subtitles and you like Totoro. The film runs about 20 minutes. It's only viewable there (meaning it's not for sale at the gift shop), and it's shown about 10 times a day and your viewing time is given to you optionally at the door (if you wanna go).

If you're under age 21 (or a stoner) there's a room full of strobe light animation effects and visual tricks to go observe. You get to see some rotoscope effects, and some visual concepts that make solid figures animate in a short loop. There's a lot of neat little things that make you appreciate your childhood.

If you're under age 99, there's a gift shop. They have everything. Every over priced knick knack tied into a Miyazaki movie that you've ever seen at a convention is available here for the exact same high price. Tshirts (japanese sized of course), posters, salt and pepper shakers, tea cozy, pencils, erasers, ink stamps, whatever you want.

All in all, it's an interesting $10 expense, and it's worth taking the trip if you're an anime fan in Tokyo. It was remarkably easy to get there.

After we went to the museum, we hit up the nearby park and watched some people play with their dogs. 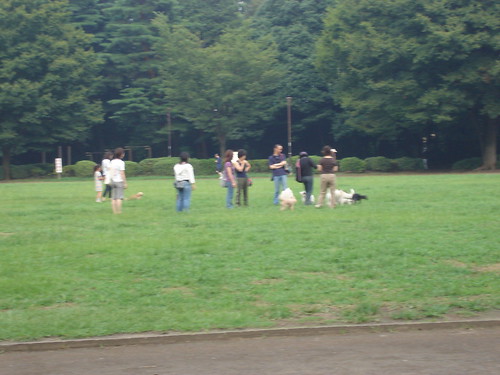 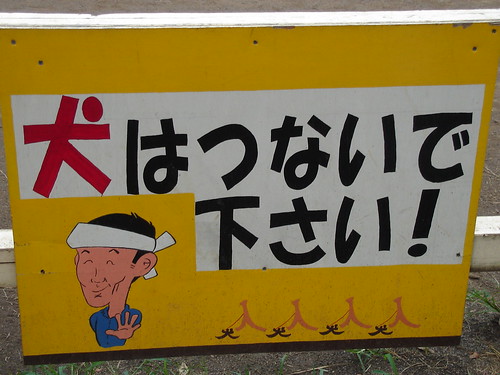 We rode back to Tokyo to dine on Japanese Mexican food.

Lemme tell you something. 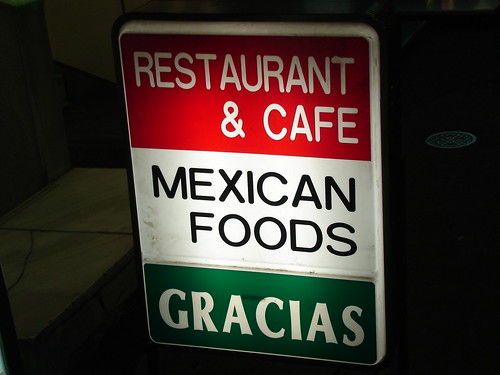 Located in Shibuya, this place is located in the basement of a building.

Japanese restaurant dining is an interesting experience. See they treat the experience like you're going to a club. Your bill has what's known as a "sitting fee" tacked on. Usually this runs anywhere from $5 to $20 per person, and while this sitting fee sounds ridiculous, you will not have to tip anyone for your meal, so it kinda balances out.

We go down into this place and are greeted by the owner. We sit down and they wheel out their one grimy, dirty, half assed english menu.

Good news. They have the following on their menu:

We decide on a 3 course menu. Chips and Salsa, Quesodillas, and Tacos.

I only have the one picture here, so you'll just have to use your imagination on the rest of this... 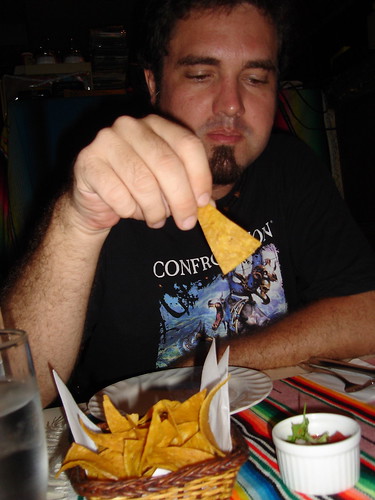 TINY basket of fried corn chips. That tiny bowl is the "salsa" Salsa and chips is $7.

Okay, so the "salsa" was pico de gallo mixed with tomato paste. That's it. Wasn't even spicy. But it sure was onion-y and peppery.

Next up was the quesodilla. Hard to screw up? Heck no. Cheese, tortilla, maybe some meat and veg. Grill it. Bam. Done.

We get a fried corn tortilla with a small block of white cheese fried into the middle of it. It was a cheese hot pocket. No spices, no flavor. Just bland. Mmm...

Next up were the tacos.

Okay, just so we're clear. I'm talking about Tacos. Meat and a corn shell. Not Tako.

What we got, we might as well have ordered Tako balls. We got non-fried corn tortillas, wrapped around shredded beef, cabbage and more of that pico-ketchup garbage. It was quite non-taco-ish in design, flavor, or anything.

After being as nice as possible and stifling a fit of giggles over the bad mexican food, we left and toured Shibuya. Shibuya isn't much. Buncha restaurants, a statue of a famous dog, Tower Records, oh... And the scene from Lost in Translation...

The Starbucks is here. Right outside the busiest intersection in the world. 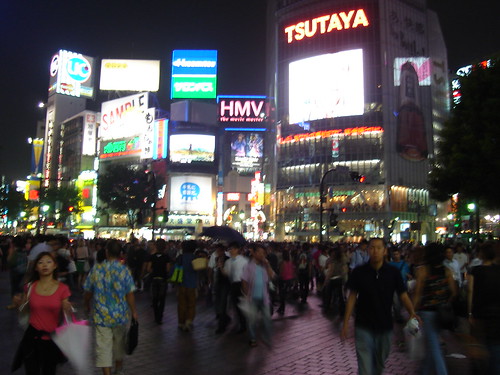 Also the world's filthiest graffiti is located in Shibuya. 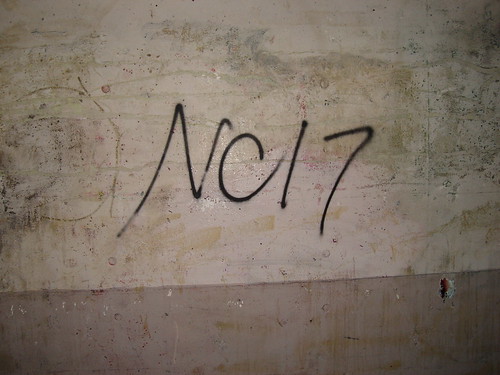 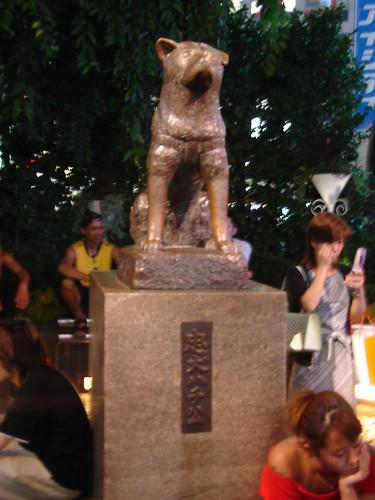 This Akita dog waited on it's master for YEARS.

After this, we went back to our hotel, drank more sake from mason jars (it's sold that way for some reason.) and passed out.

Tomorrow: Part 1 of 2 regarding the 2 day whirlwind tour of Tokyo. And secrets on mastering the Tokyo Subway Nightmare.
#Community    #Offbeat
Login to vote this up!