The day after the odd trip at the punk bar, we went to Yamadera, notable to Shinto and Buddhist practitioners because of the vertical journey needed to visit the temple located on the side of a mountain.

Yamadera itself is a tiny, tiny little village. I've been a big city guy my whole live, having grown up in Dallas, living in Houston. I don't endear myself to small towns easily, but this place was really neat. 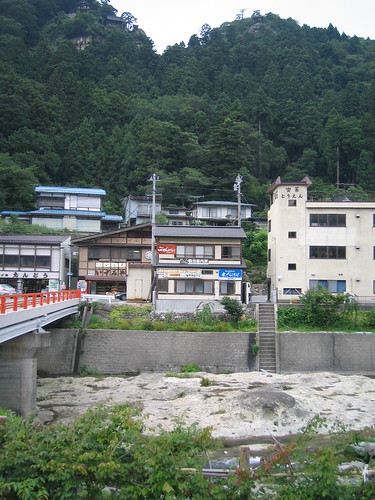 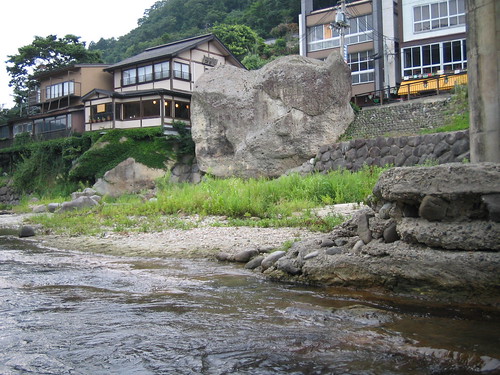 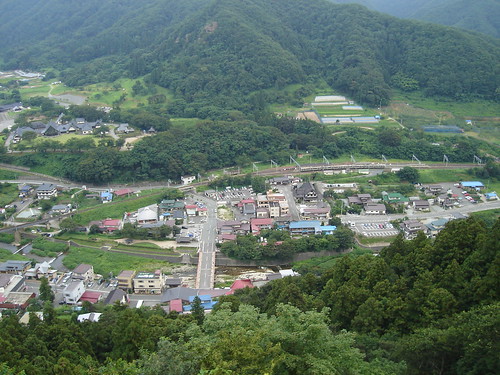 Town as seen from the top of the temple

So when we first arrived in town, the only notable thing about the train station was this mural. 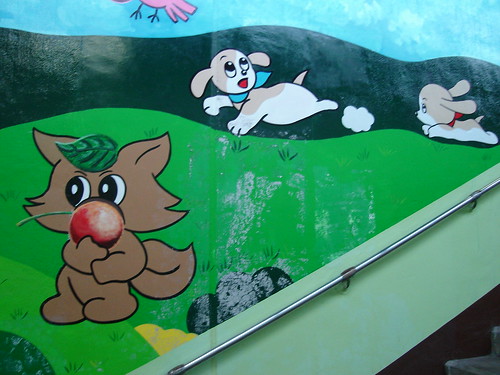 This mural represents the great Apple Stealing Fox/Dog War of 1742, where every dog died in vain to attempt to stop all the foxes from taking all the apples in town on winter.

I asked Fenris how long to expect the climb to the top of the temple would be. See, the temple at Yamadera is set into a mountain. And it's a damn near vertical climb up a set of several thousand stairs. Fenris replied that he made the climb in 30 minutes. Let me take a second to point out a difference between Fenris and myself. Fenris is skinny, I'm was a heavy, out of shape, fat man who had no business climbing ONE flight of stairs let alone stairs set into the side of a mountain.

So we climbed. I didn't take any pictures of the climb because it was a sad affair. I made the first 5 flights of stairs with no problem. Then I had to stop every two. Then every one. Then we had to take breaks. This was a looooooooooooooong fucking set of stairs. They have 3 "stations" on the climb up where people can take breaks and get food or water. We stopped at every one.

We finally get to the upper reaches of the temple about 90 minutes after starting. It was worth every torturous second of climbing that damn staircase.

The upper reaches were split into several levels. The main lower level was the actual temple and several homes of monks that live and work in the temple. We weren't allowed to take pictures inside the temple, but apparently this portion of the monk's day was "reading the newspaper" prayers, along with "drinking coffee" absolution. Very strict stuff. Deeply spiritual. Anyway, onto the pictures. 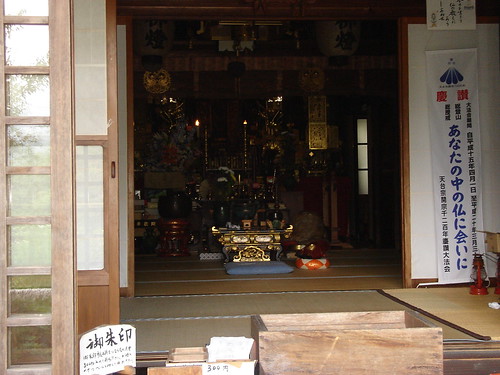 We were arriving at the start of the "coffee break" ceremony 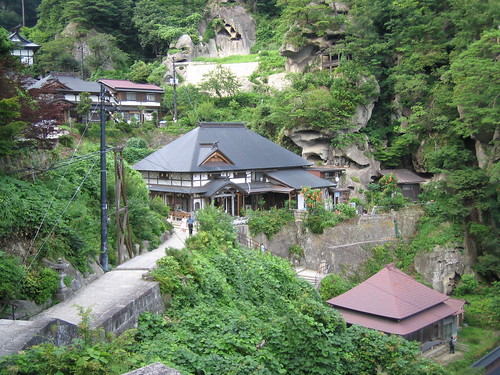 Monks are very poor people who are only able to afford 4 bedroom homes on the sides of mountains. 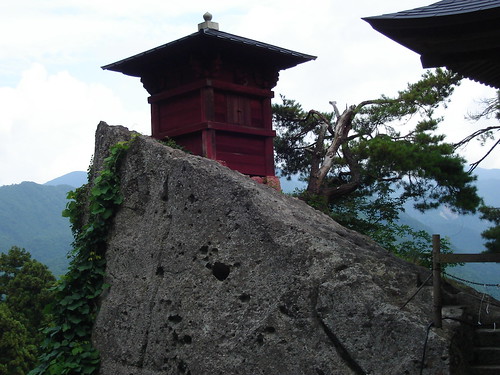 Marker for the entrance of the temple 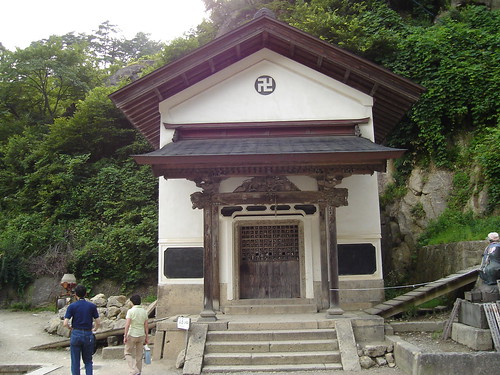 If you're ignorant, then, yes, this is a Nazi substation. If you know why there's a swastika here, then you're enlightened... 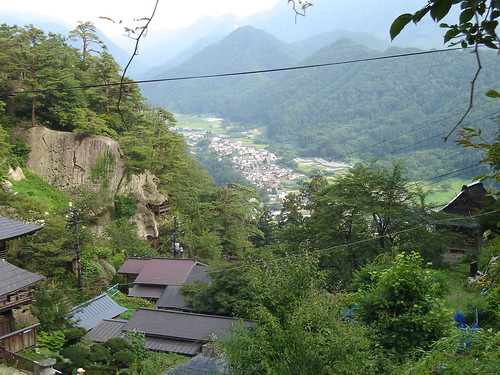 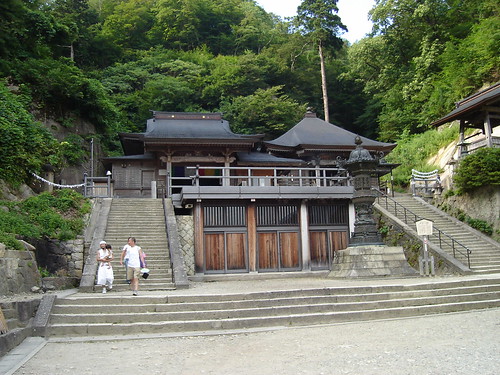 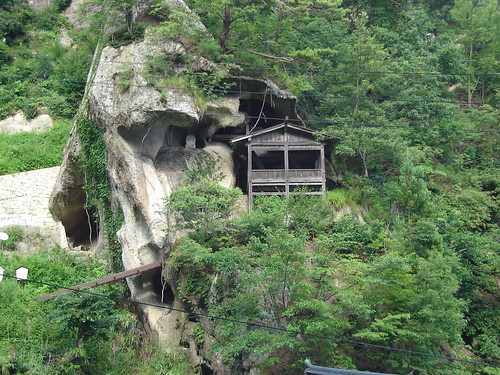 Ever lovin' god. We've got this observation deck taunting us from above. NOOO MOOORE CLIMBING!!!

Now the upper level was an observation deck where we got to see basically the whole town from several hundred feet up. 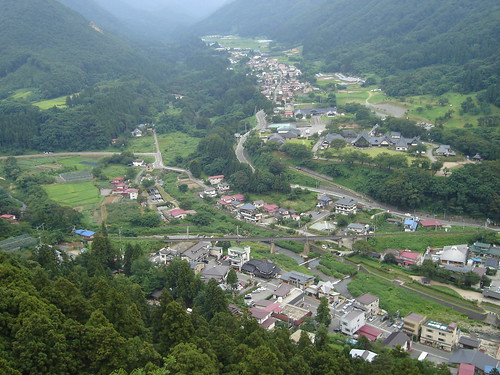 High upon the mountains, man sees all from above. Ohmmmmmm....

After we left Yamadera, we headed back to Yamagata, and went to El Paso and then onto dinner where we got to cook our food over a bucket of 600 degree stones. Management got upset at me because I kept cooking my pork and chicken too long and was causing a scene in doing so. Right. Trichinosis and salmonella are too culturally biased to bother with here. After all the climbing and walking, we covered 7 miles in one day. 7 miles. A plate of hot meat, rice, and beer was the perfect end.

Oh yeah, Fenris tried to get me to order horse off of the menu. Wasn't happening. 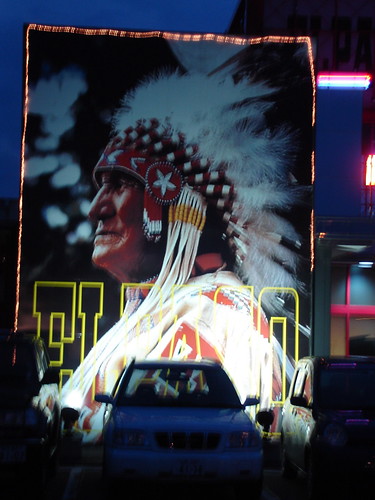 "El Paso" is a local Native American themed Pachinko parlor. Pachinko parlors are smokey hell holes that you have no business going into unless you want to stink of cigarettes and lose money. 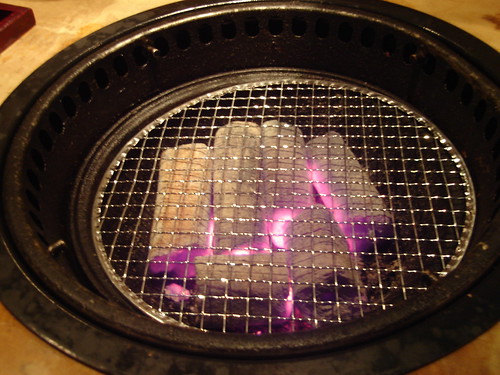 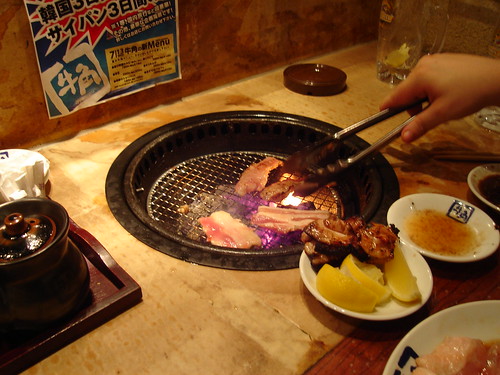 Cooking meat. Back bacon and chicken, I think... 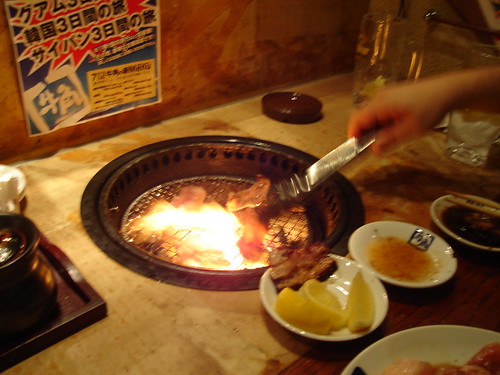 The scandalous incident that nearly got us kicked out of the restaurant. Over cooked pork and chicken

Next up - We go shopping and get stranded again.
#Community
Login to vote this up!