We went to Ginza, decided to check out the Apple store and the Sony Style Museum.

The Sony Museum is a product showcase of all of Sony's current products. It's like 5 floors of all Sony products and toys.

I FINALLY got to play with an Aibo (they killed the product line 5 months later). Aibo was interesting, I don't think he'd replace a real dog, but it's interesting how it reacts to people. It really does make some effort to emulate a living creature in that it reacts positively to petting it and negatively if you shout at it. 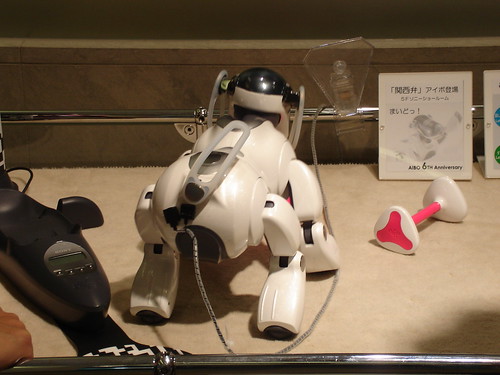 He shits Mini Discs and memory sticks, so bring a scoop. 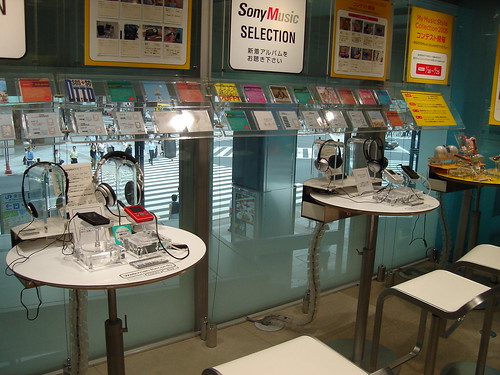 This is the museum. The store is 2 floors up. You can't buy these, but you can look at them. 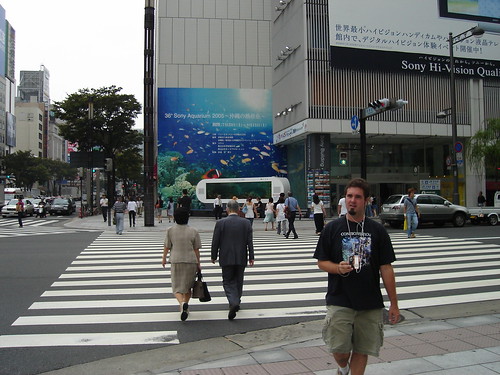 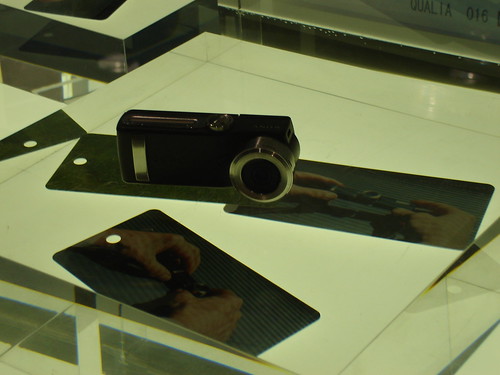 The camera is smaller than half your hand.

The Sony building was freakin' cool. The 5th floor had a special wing full of Playstation 2 and PSP units. I'm sure there's lots of PS3's there now, but they had games you could play and try. Sadly, they would not allow any pictures to be taken in this department.

When I was there, every other unit was some sort of fighting game, and there were a line of kids swarming over the Bleach PSP game.

Afterwards, we pressed onto the Apple store.
I can't find my picture of the outside of the store, apparently I lost it at some point. Instead I present this photo a department store a block from the Apple store. 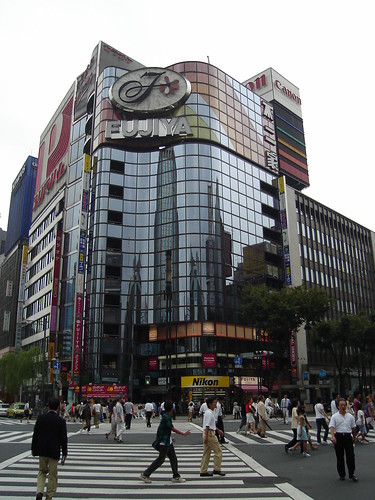 NOT the Apple Store. Head left past this building and it'll be on the left about a block from here...

The Apple store is a 3 story building, the first floor is identical to every other apple store you've ever been in. The second floor is a LARGE room for classes and demonstrations of all the magical fragical Apple Apps. The third floor is full of iMacs to surf, for free... Very handy if you need to send off some email.

We headed back to the hotel and saw a homeless guy, apparently headed back from a busy day at the office. 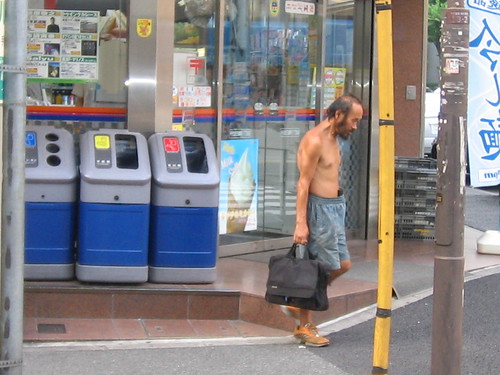 OMG! Homeless person in Japan! One of 20, collect them all!

The subway warned us of a potential for Bert and Ernie to rob us... 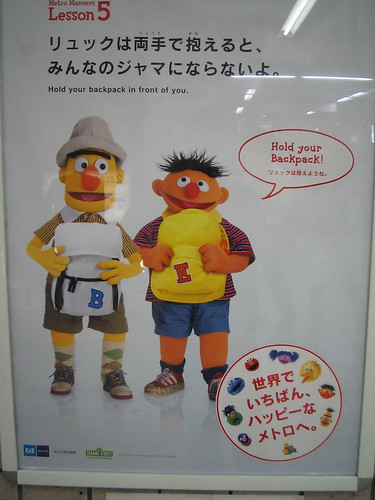 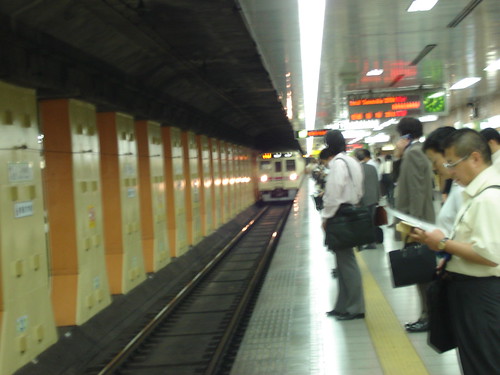 So we arrive in Shinjuku station. IT'S HUGE! In the time it takes to walk across Shinjuku station, you're practically where you need to go anyway by that point. It's big. And confusing. The outside looks like this right around the station. 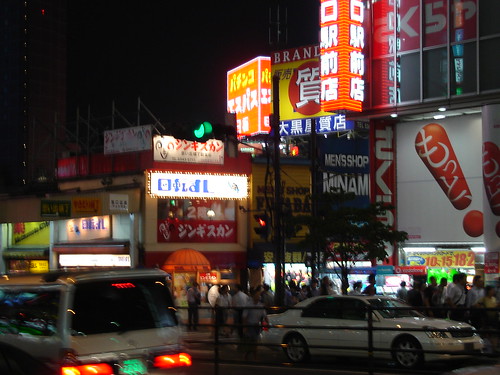 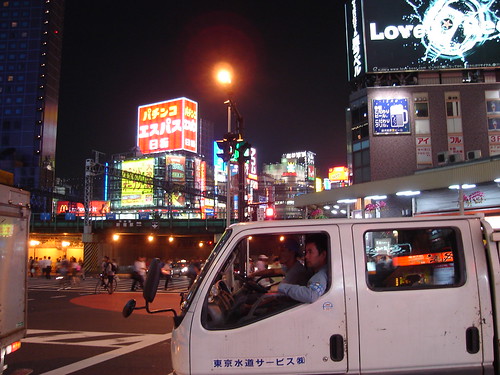 We proceeded into Kabukicho.

In case you weren't aware of the perils that lie within Kabukicho, just a quick refresher... Kabukicho is the dangerous part of all of Japan. It's also the noisest, brightest, and busiest area. What makes it all of this? It's the real life adult version of Pinnochio's Pleasure Island.

Booze, womens, karaoke, movies, titty bars, WORSE, and everything in between there.

I have just a few scant pictures, since so much is happening in this area, it's hard to focus just on one thing. 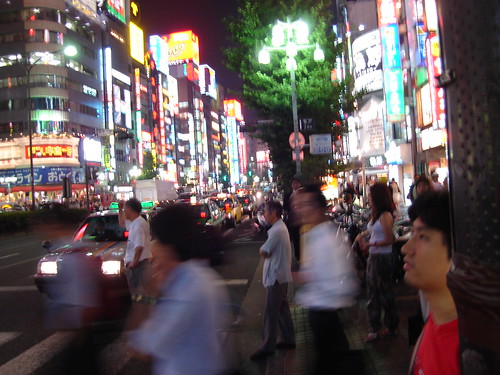 One of the many, many, side streets with innumerable pleasures and fantasies

Bring money. Lots of money. If you want to see anything more than a hostess club, practice your Japanese. They have two different sets of pimps prowling the streets. The black guys are Africans. 90% of them speak English, German, or French and are there to get you off the street and into shitty hostess bars where you buy drinks for clothed women all night long.

If you go up to the Japanese guys, ask what you're looking for IN JAPANESE and how much you're willing to spend. They'll take care of the rest.

You won't get into ANYPLACE without talking to a pimp. Strip joints included. They do not work outside the club you find them at. They purposely work away from the club so you don't know how much things will cost you till you've already agreed to go.

I don't need to fill in ALL the details of my evening from here, but I had a great time and bewbs were sighted several times during the course of the evening and I left the area without dying or being robbed. BTW, beer in strip joints is just as expensive there as it is here. Lapdances too.

Oh, and trains stop their routes at midnight, so keep your wits and watch about you as you commence your evening's debauchery.

Next time: A final goodbye to 2005 and a sign of content to come...
#Community
Login to vote this up!