9:14 PM on 07.26.2011 (server time)    0
“Do Not Mistake Motion for Action”. So go the words of the author Ernest Hemmingway, a man who wrote such classics as “For Whom the Bell Tolls” and “Enter Sandman”. Who knew how true his words would become in the realm of novelty video game controllers? His towering intellect must have seen the technology of the future, seen the landscape of gaming in 2011 and seen Disneyland Kinect. He must’ve winced, cried out; he must’ve fought off the nightmares and the pain. He tried to warn us of the inevitable future, telling us of the terrible fate that awaited us all. But we ignored him, we felt we knew best. But the signs were all there, not only Hemmingway’s quote, but also the prototypes, the T-1000s of the gaming controller accessory tack on. Yes my friends, we all stood back and laughed as the feeble little androids fell over playing football, but soon they would turn on us, just as we all laughed at early motion controllers. We were wrong. The Airpad for PS1 was not just a novelty, it was the blueprint for the revolution.

The Airpad is a controller for the PS1. I say controller, it more resembles a device that you can use to render games entirely unplayable. Shaped like disc and as ergonomic as dinner plate this device is about as useful as a netting sail. The “control” promised within the description is merely an estimation of its abilities; I refuse to acknowledge somebody ever beat a game with this thing, least of all enjoyed it. It has a simple gyroscope, simple in the sense of the word “can’t spell cat” rather than “elegant in design”, and has all of the face and trigger buttons of a normal PS1 pad. It has to be said in its favor that the device is easy to setup, simply stab it into your PS1, hear the machine give out a little cry of pain, and begin. What will follow will only cause regret.

I decided that, because I’m the kind of person who suffers for others pleasure (I SHALL EAT A BAG OF PORCUPINES IF YOU FAP THIS BLOG!) I recorded myself playing some PS1 classics and a James Bond game. Below is a link to the footage of me enduring the presence of the infernal device. Watch, watch and learn, for we cannot fail our children again… 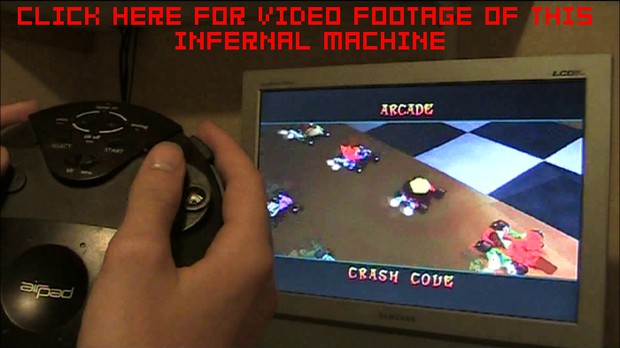 See? SEE? See the horrors this device brings, impossible control over characters that have been tied up like marionettes so they may be controlled by a puppet master with epilepsy. Solid Snake, running uncontrollably at a wall, Mickey Mouse, dancing on a crate like a hooker, James Bond HARMING A CIVILIAN!? My friends, what you are seeing is the beginning. This was where the trenches were dug, where the destination was chosen and where the war began. You may scoff, you may tell me that this was simply an accessory for the PS1 developed in the UK by an ambitious team of hardware developers who actually helped pioneer a fascinating and later rewarding technology BUT YOU WOULD BE WRONG! I have held in my palm Satan’s faeces, and it burned as well as stank.

The legacy of such bold technology?

"How to mess up a game in which you ride a dragon is quite simple. You make the control of that dragon answerable to motion-sensing technology that can't distinguish subtle or even very forced gestures in anything like the detail required." – EDGE Magazine, Lair Review, 3/10

Lewis Dunn wrote this blog. He's a writer. He's even writing a book. If you want to purchase the first episode of that book you can by clicking here. If you do he may eat something solid soon!
#OpinionEditorial
Login to vote this up!

Hello, I'm Lewis, I'm a lot like you, only I'm probably not.

I got into gaming as a child, when I was handed the portable version of crack cocaine, known colloquially as Tetris. I would spend hours trying to make blocks form lines so they would disappear never to return. At the age of 8 I had my first existential crisis as to what happens to blocks that disappear. My desire to avoid death has since made Wario Land 2 one of my favourite games of all time, as Wario was immortal and this stopped me questioning my own mortality. Pokemon too fitted into this realm of immortal beings where only fainting occurred after heavy amounts of electricity as opposed to permanent void dwelling.

After I graduated from the philosophical quandaries posed by hand held gaming I obtained a PS1 and fell in love with games like Spyro, Crash and Rayman 2, a game so deceptively fucking terrifying that I have reoccurring dreams about the giant spider. And the king of nightmares. And the robot pirates. I don't care what any of you say, Rayman 2 is NOT for children.

I have a deep love of humour in games, with some of my favourites being no More Heroes, Brutal Legend, Team Fortress 2, Portal and Super Mario Galaxy. Sometimes I like to play bad games too, such as Alone in the dark, which is as hilarious as it is depressing. I have aspirations to become a writer, comedian and maybe one day game designer, but such things are simply the wet dreams of a desperate teen. Odds are I'll end up working in an office chewing on pens longing to go home and half write a blog.