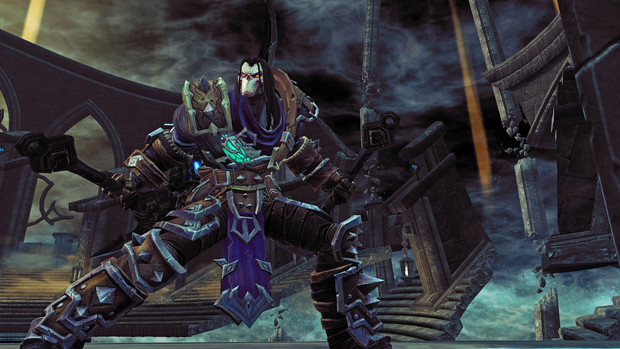 More than that, however, the game was incredibly polished. Both of them, in fact. Darksiders 2 wasn't quite as polished as the first, but for as large as the games were there was very little in the way of bugs or glitches. Compare this to the broken state Bethesda and Rockstar get away with and I'd say Vigil has a near perfect record.

Yet Darksiders isn't a high-selling IP. As such, no one is interested. Warhammer 40K, Saint's Row, Metro: Last Light, even Homefront 2. We know these games all have a market, or at least a potential market. That is what sets them apart, and that is also why those studios were sold. After all, it would just cost more to try and teach the code to a new team (you'd end up repeating Starcraft: Ghost all over again). No one was after the studios, though. If they were, Vigil would have been purchased.

No, they were merely looking for IP, and the studios came along as necessity.

Our industry cannot acknowledge when a group of people do a job well done. The people that make the game are meaningless, in fact. In the eyes of the money holders, at least. Now we have Vigil saying goodbye while the head of Platinum Games Executive Director Inaba mentions being interested in the IP "if it's cheap enough". A studio meant for scrotum crushing difficult action games is considering taking Darksiders, a franchise that is not that kind of action game.

I had to drink tonight. I had to get some whiskey in me so I could be less depressed. It didn't work, as I never got drunk and I remain depressed. But I am just so upset to see so many good, talented people lose their jobs.

It is the implication of it all. Good games didn't sell well, and as a result a bunch of talented people that worked well together are now separate and out of a job. That, friends, is a tragedy.

Good-bye, Vigil. I can only hope you all come together some day, somehow.
Login to vote this up!

After a little over a year's hiatus I have returned to the Destructoid Blog fold. Despite how thinly-spread my writing efforts have become, I still sometimes feel the need for a canvas in which I can sloppily splash the paint of my thoughts upon in hopes to have something resembling a thing.

So who am I? Right now I'm a writer over at GamersWithJobs, a blogger, a YouTuber and a Podcaster. I specialize in games analysis and criticism, and would like to use the Destructoid blog to share in some of my experiences working on these projects.

Note that I will be linking things I've been working on, but I will do so with the intent of embellishing on thoughts unsaid or detailing some of the work for any interested in also being content providers. Perhaps some of my experiences can help you out along the way.