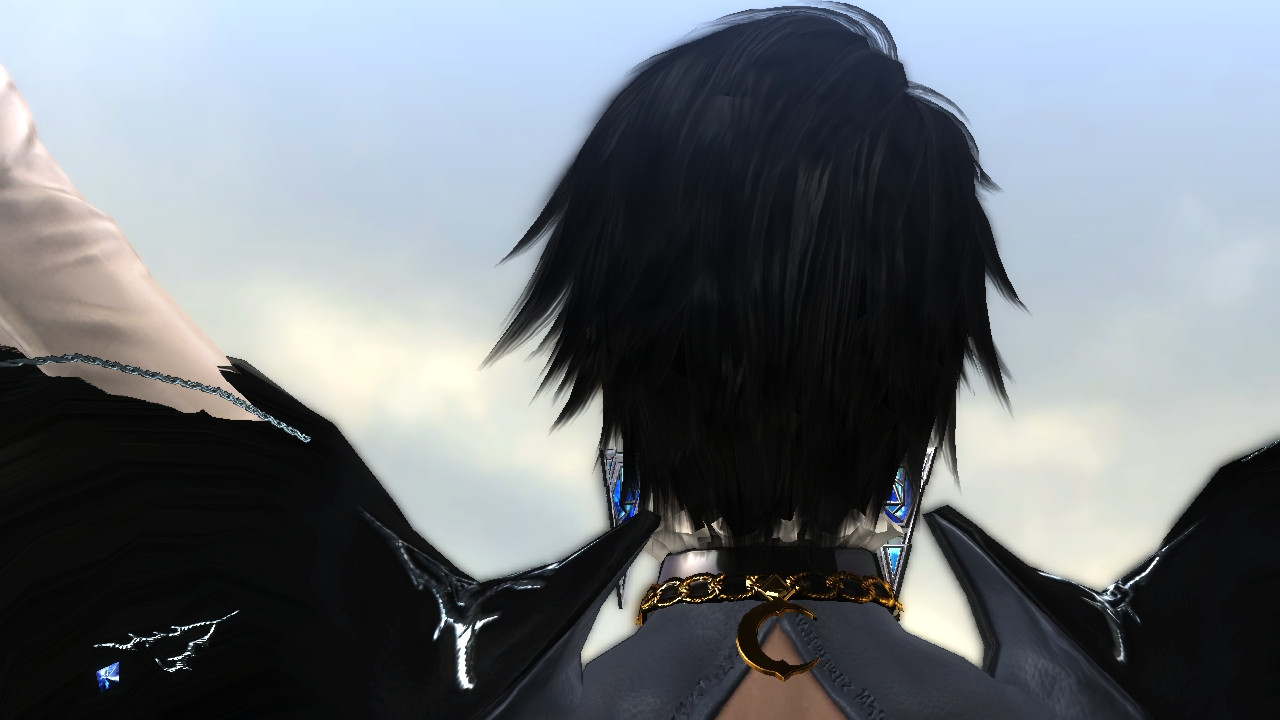 You begin this demo standing atop of a jet fighter. And not just any jet fighter, but a jet fighter careening through a city desperately trying to stay in flight while you are reducing monstrous angels to clouds of feathers and viscera. But who cares about that poor pilot when you're coming to grips with the game's smooth-as-butter controls and gameplay mechanics? Eventually, as the jet is reduced to scrap by some angel-dragon-serpant thingy, you find yourself fighting a bigger, much stronger angel on top of a train, dodging his attacks with impeccable precision and revealing his disgusting collection of eyes. THAT angel becomes dinner for one of your demons from the previous game, but what's this? The demon, appropriately named Gommorah, sends the soul of your partner, Jeanne, into the depths of hell, and breaks free of your hairy bonds! Time to fight your former ally and get revenge(ance)! Is he the final boss, you ask. He seems quite difficult and massive, and acts like some cross between Godzilla and King Kong, so why is he the first boss? 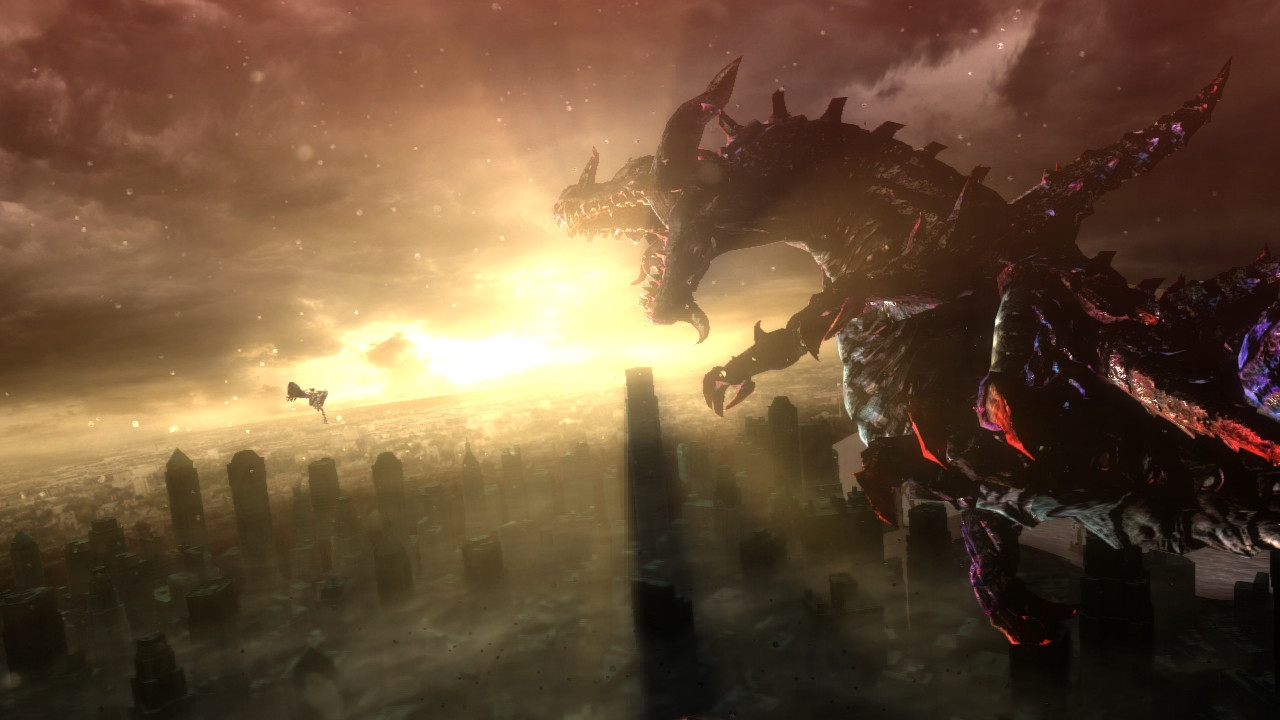 Well, that's only the prologue, my friend. 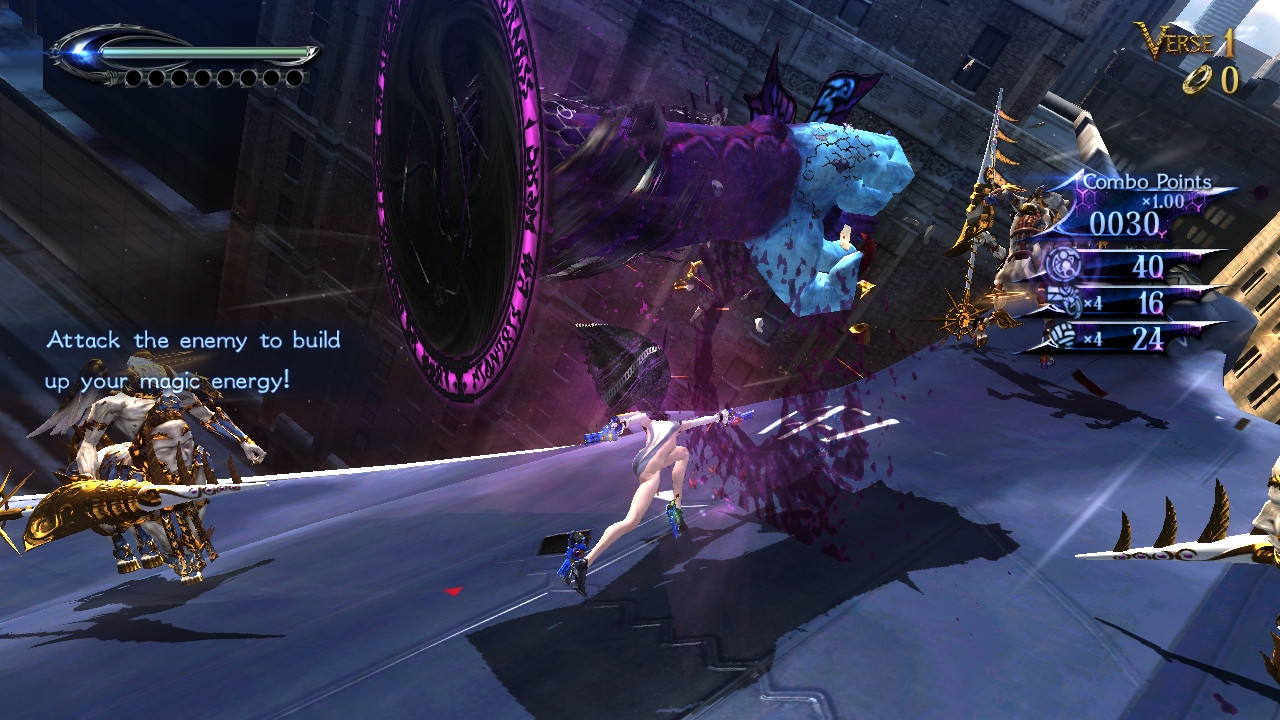 Ah, yes, this is a Platinum game. Though they are critical darlings and have a dedicated fanbase, they have rarely recieved the popular recognition that they deserve, and it's not really difficult to notice why. Their games are usually full of mechanical complexity, the kind rarely seen outside the realm of fighting games. They ask a whole lot out of the player from the very beginning, encouraging multiple playthroughs in the process. And for the most part, their games are, in a word, sort of crazy. To give you an idea, their most sedate game to date is Metal Gear Rising. Think about that. Their games rarely let up on that part either, so what should be the final boss in every other game becomes the boss of the first level. 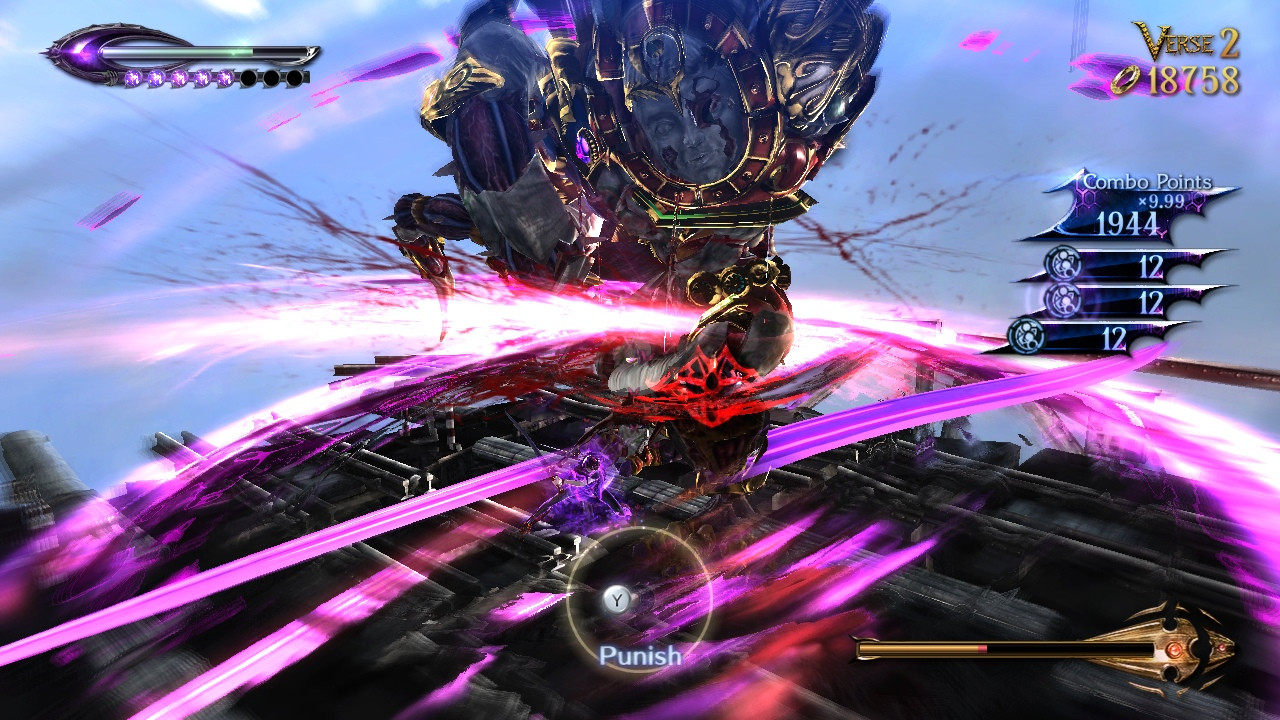 So, even from my limited experience from Metal Gear Rising and The Wonderful 101(two games that I highly, highly reccomend), the gameplay is instantly familiar. You have two buttons here, for punches and kicks respectively, and for people who have played The Wonderful 101, the buttons are now mapped to the X and A buttons, presumably for their proximity to the right analog stick. successfully completing a combo, for example, unleashes a devastating Wicked Weave. Using Love is Blue(your new guns), for example, summons the hands and legs of Madama Butterfly for a strong punch or kick, while having the Rakshasa swords and Alruna whips equiped summons larger blades and whips. Attacking builds up a magic meter, which can be unleashed(*snicker*) in two equally satisfying ways. Torture Attacks brutalizes a single enemy in exchange for their weapons(in the full game), while Umbran Climax turns every blow into a Wicked Weave and ending combos in summoning entire demons("Infernal Weaves," if you will). Both have their advantages and disadvantages, but most of the time I just used Umbran Climax for the purposes of crowd control. The Y button also has the purpose of continuous shooting, which is useful for continuing combos even if there are few enemies near you. 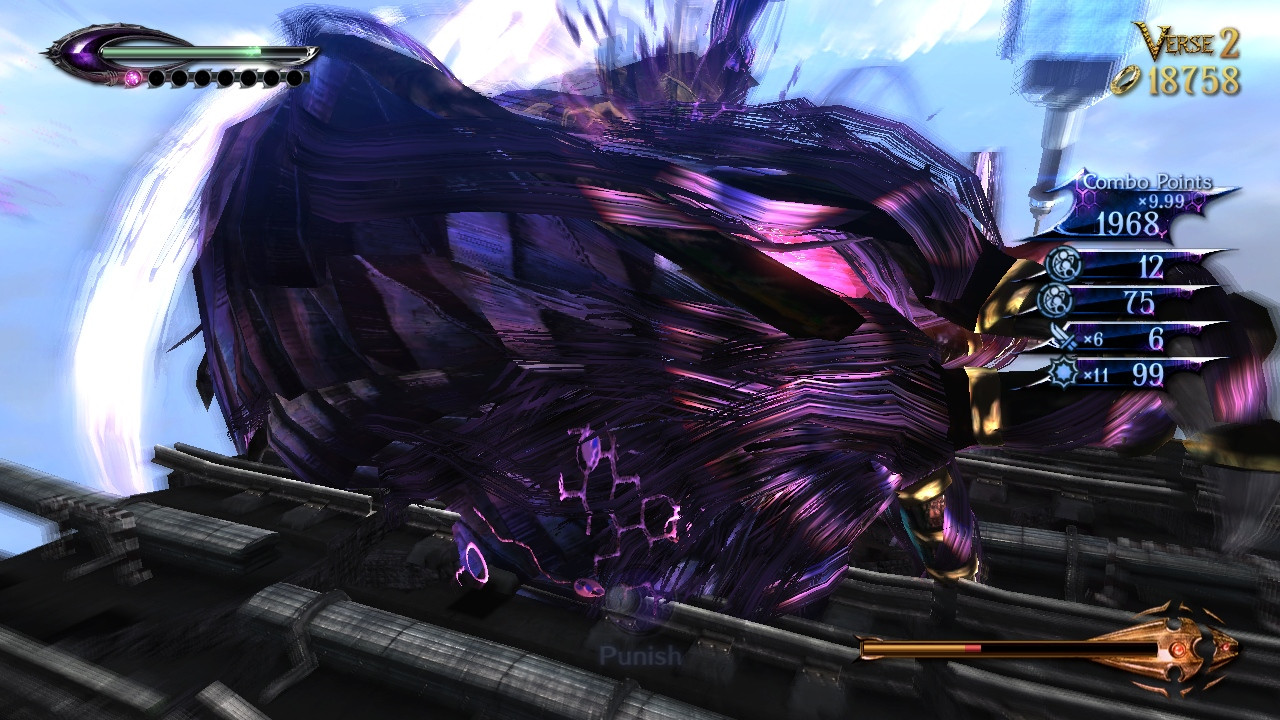 With these two weapon sets(which can be switched without delay), you can set up countless combos quite easily. Aiding you is the tried-and-true Witch Time mechanic, which after a successful dodge slows down time for you and leaves foes vulnerable. Your combo score is temperarily increased while in Witch Time, which makes it a classically helpful and satisfying mechanic. Also back is Dodge Offset, which by holding the button you were attacking with while dodging at the same time negates the effect. It takes a moment to get used to, but it's also really helpful once it's learned. 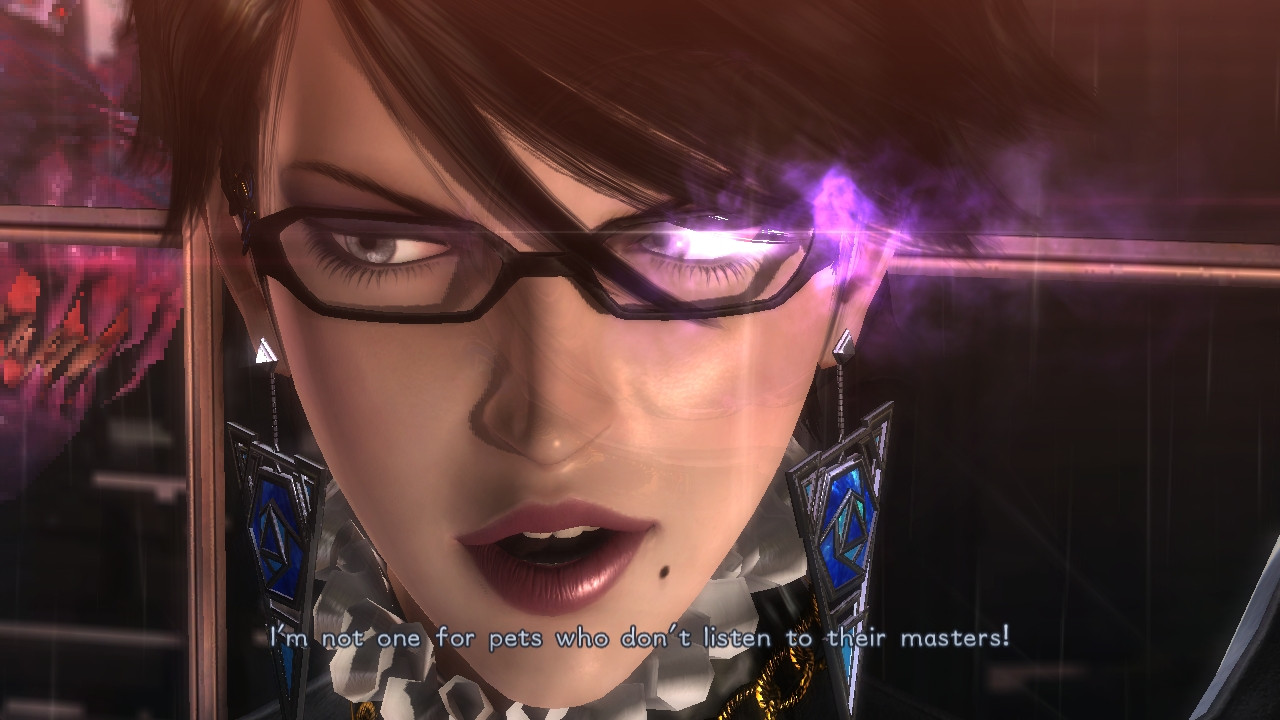 The audiovisual aspect is also really impressive. For a game that runs on weaker hardware, Platinum makes full use of the system's capabilities, having the game run undeniably smoothly with eye-popping colors and detailed characters. The weird yellow filter and real-is-brown inclinations of the first Bayonetta and MGR, respectively, are entirely removed, which allows the game's flamboyant art direction shine even brighter. The performance is, more importantly, a massive step-up from their last Wii U game, The Wonderful 101, shining where that game struggled to keep up. There are occasionally noticable drops, but they rarely get in the way of gameplay. The music, too, is classic stuff, like all the electric sugar that you can take. 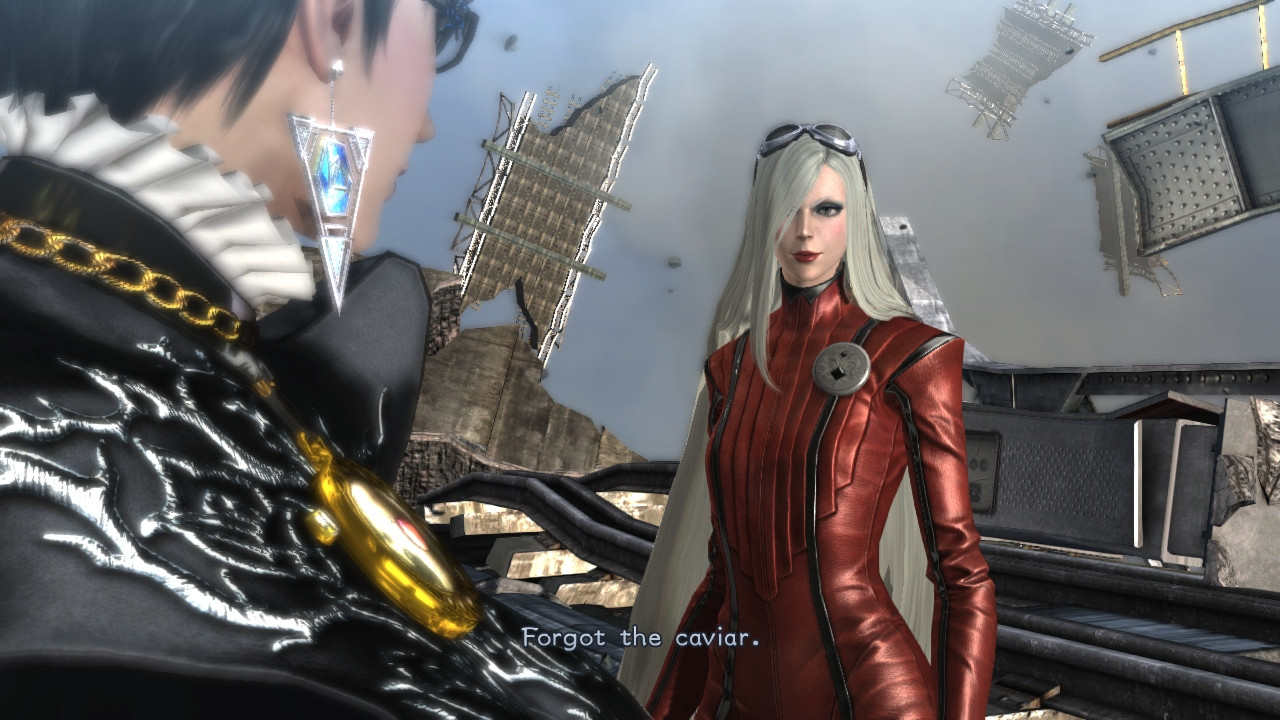 The demo comes out fifteen days before the release of the full game, and the full game will inevitably be a much bigger game than the demo, which consists of just a few portions of the prologue. Still, it's an exciting vertical cut of gameplay, and you'll probably use up all 15 plays before the actual game is here. 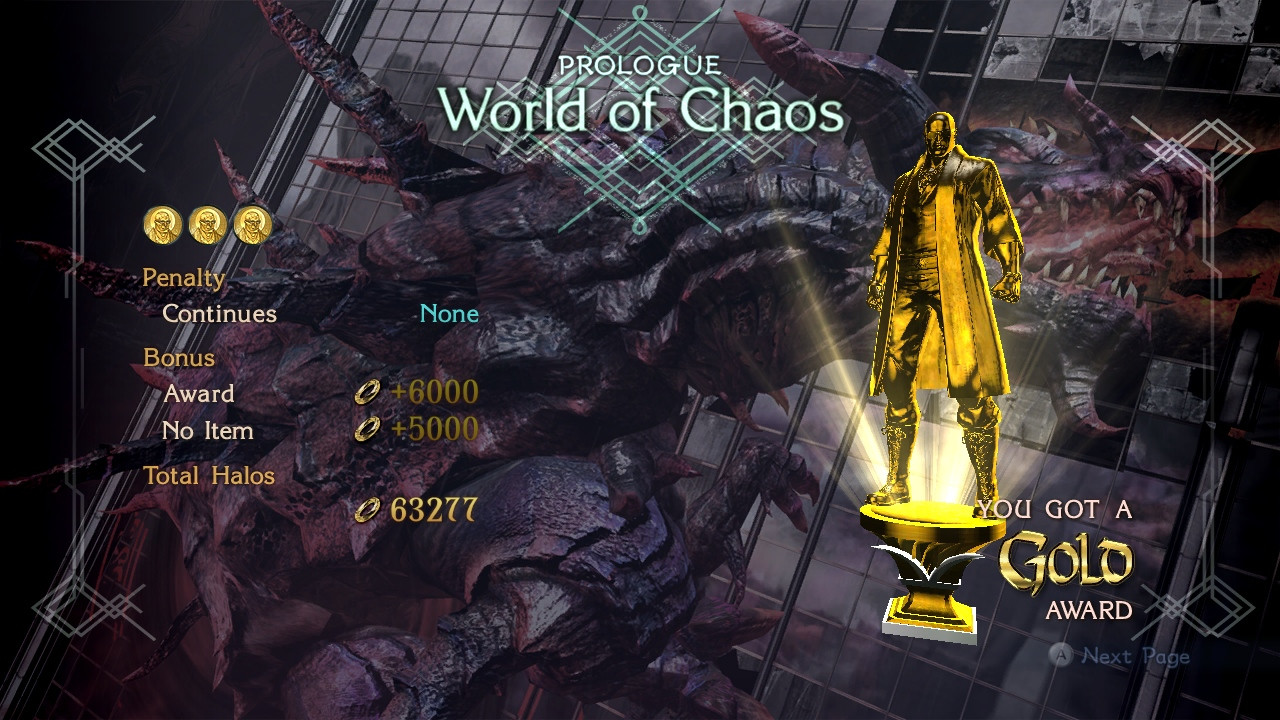