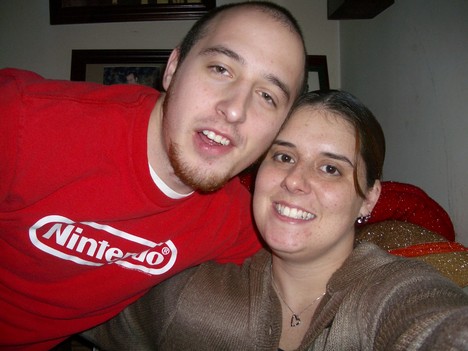 1. I used to draw extensively. But then one of my better friends who I would draw with went to a different school. And I started working with computers, which took my attention away from drawing even more. And the art program at my high school tried to get me to focus on more paint and collage and other mediums, when I obviously didn't care for them, which kind of killed my enthusiasm for art in general.

2. I married my "high school sweetheart" after being with her for 7 years. She really wasn't my high school sweet heart since we didn't start seeing each other until the last two months of my senior year.

3. I'm extremely shy. With almost everything. I even feel embarassed if I sing in front of my wife.

4. I probably broke my hand punching concrete after an argument. Never went to the doctor to get it checked out, but it swelled up to twice the size of normal and I couldn't touch my palm with my two outer fingers.

5. I learned how to hang-glide on my 1-year marriage anniversary. I did so well that my instructor told me that I should test for my Hang-1 certification. But since I don't live near anywhere I could continue to learn, I didn't do it. I'm extremely disappointed, because it was really fun. For my two year anniversary, I'm going skydiving.

6. I've never left the country, or been further south than Beaufort, SC or further north than Vermont. The furthest west I've been was Las Vegas, when I got married, and I didn't like it very much. I prefer Atlantic City for my debauchery needs.

7. I and my brothers traded in our entire collection of NES games for Turok for the N64. Blindside would be so proud of us.

8. I love skateboarding, even though I'm extremely bad at it. I think its just the part of me that doesn't mind falling down and loves acting like a goof. It goes along with the part of me that bought Soap shoes and the part that slides around on ice whenever it snows.

9. I'm mentioned in the liner notes for Comin Correct's In Memory Of... album. Mark Palese, their guitarist, got his start in a local band (My Body My Blood) that was really friendly with everyone who wasn't a holier-than-thou scenester. We ended up getting pretty friendly, and I even created a website for My Body My Blood, so he thanked me, my brothers, and a few of my friends in the Comin Correct liner.

10. I prefer camping to staying anywhere fancy. Its also one of the only times I can completely cut myself off from the outside world. Every other day I'm constantly connected, using a computer, or playing games. But camping is the time for me to turn all that off and explore.

BONUS FACT! 11. I got thrown out of a Biohazard show for fighting with bouncers. One bouncer had a stick up his ass and and kept throwing me into the pit. My uncle asked him to stop a few times, and the last time, the bouncer threw a punch at him. Uncle kicked his ass, my brother kicked another bouncer's ass, I got put in the weakest full nelson ever after pouncing on a bouncer and beating his face in and was then escorted out the door, where they tried to throw me into the door frame, but I stopped it from happening by putting my foot in the way. Seriously, this guy was probably the worst bouncer ever. Couldn't even manhandle my 5'3", 130lb ass.
#Community
Login to vote this up!