Re: The joys of being a videogame reviewer

1:51 AM on 03.22.2010 (server time)    0
A little exposition before we start. I've been a professional games writer for over three years now. As in, writing about games has been my primary source of income and pretty much the main focus of my career during that time. During those three years, I've written for three different publishers and had enough articles posted to keep me financially solvent. I know, three years in this business is nothing. But it's long enough to learn a few things.

In these last three years, not one of my articles was ever published without an editor's approval; every piece of writing I've ever put out has been edited, sometimes mercilessly, and sometimes never even published at all. Not that I'm bitter about this, far from it. In order to make a living writing about things I love, I know I have to keep certain thoughts to myself, toe the party line occasionally, or write about things I have absolutely no interest in. I'm part of a system; complete freedom of speech is a luxury I've neither expected nor demanded.

So when a writer as well-known as Jim Sterling speaks candidly about his work, I take notice. 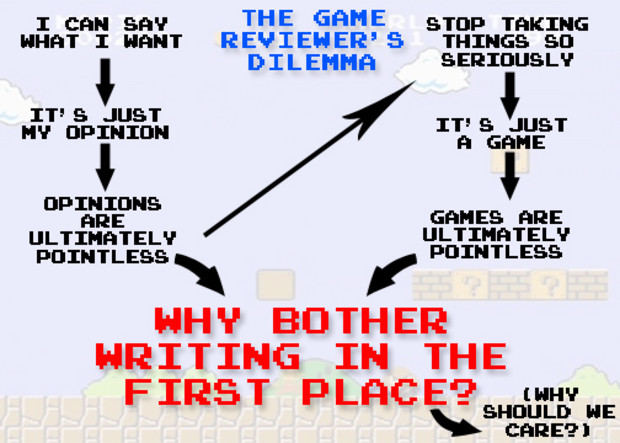 Mamma always said: If you don't respect yourself, why should anyone respect you?

Too many reviewers write their reviews as no more than just evaluations, or worse yet, buying recommendations. (Sterling is not actually guilty of this, to his credit- this is more a problem with other reviewers I've encountered.) If a reviewer is merely stating his opinion, then that opinion can and will be ignored. When a game reviewer goes beyond "reviewing" and engages in "criticism," he/she is trying to glean some larger, objective insight into the world of gaming. Describing whether or not something works is one thing; describing why it works is something else. And that something else will contribute to our gaming community, if it is insightful enough.

I won't go into the specifics of the FFXIII review because in all honesty, I don't care. But Sterling's reviews in general very often transcend evaluations and enter the realm of "criticism" and for that, I respect him. He doesn't "make a joke of" writing reviews; he often strikes right to the heart of why games work or don't work. But Sterling's article "The joys of being a videogame reviewer" was a disappointment. Sterling could have stood his ground; instead he merely reinforced the notion that games journalists are nothing more than assholes with keyboards.
#Community
Login to vote this up!

I'm a games writer who wishes to remain anonymous