Why is NO ONE talking about Shantae and the Pirates Curse?! 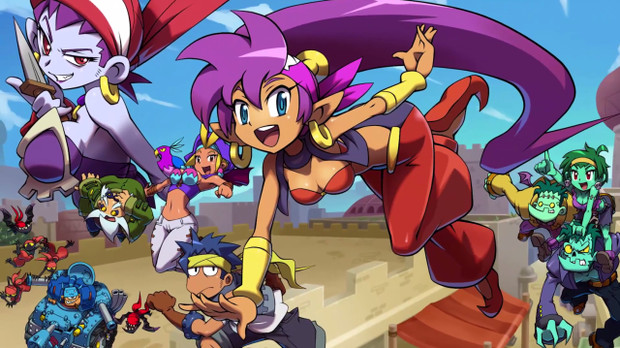 I have always had a love/hate relationship with the gaming industry whenever the holiday season rolls around. The world becomes a cluster of angry people shifting about, looking for the best deals on the hottest games of the season. Some of the larger retail chains and third party distributors start rolling out the deals like their inventory was going to turn to mushy bannanas an hour after Christmas day. It's hard to tell if a game that comes out on or near Christmas is going to be good, or if the developer is just squirting it out in order to get profits fueled solely by jingle-bell-fueled-consumer-anticipation.

The WiiU gets played pretty frequently in my household when the holidays come a-knocking. It's a chance for my family to get together and enjoy a pasttime that most of us love. Casually browsing the Nintendo eShop, I noticed that there was one title in particular I had my eye on that had been released Christmas morning; a little known installment to the relatively popular series by WayForward Technologies by the name of Shantae and the Pirates Curse.

I had bought and played a previous installment available on the Nintendo 3DS and had been keeping track of the series since then, and not just because the main character was a curvy, half-genie, half-naked belly dancer. I'm sure most of you recall the composer of the music for a game you may have heard of by the name of Shovel Knight? Well Jake Kaufman, responsible for the glorious music in that epic title was the composer for the wonderful music in Shantae. The original was an impossibly fun platformer with a wide range of interesting and lovable cast, all accompanied by enjoyable chiptune music. So, seeing that a new installment had been released with pretty good reviews, I figured $20 was a pretty good price for something that looked genuinely good, not to mention finished; a somewhat rare quality in games these days.

After only a handful of minutes into the story I was hooked. Seriously. Hooked. It was impossible to put the WiiU tablet down. So now I'm burdened with a serious question: WHY IS NO ONE TALKING ABOUT THIS GAME?!

Shantae and the Pirates Curse is one of the best platformers I've played since I got my hands on Shovel Knight earlier this year, and I can personally atest to the gameplay being JUST as rewarding. Playing as Shantae, a half-genie who has recently lost her powers, the player teams up on an exciting adventure with the witty and scantily-clad pirate, Risky Boots to investigate a surge of evil in Sequin Land. Tying in classic platforming gameplay to gorgeously crafted sprites, you easily lose yourself in the sassy world of Shantae, whipping some serious monster butt with the power of a wickedly painful ponytail! Not to mention the abundance of clever and useful power ups you obtain along the way. The movement of the main character cannot be described as anything other the fluid and precise. There's a certain joy to be had by feeling that the character the player controls feels like an extension of his or her own instincts and thoughts; none of the movements or actions feeling misplaced or awkward. 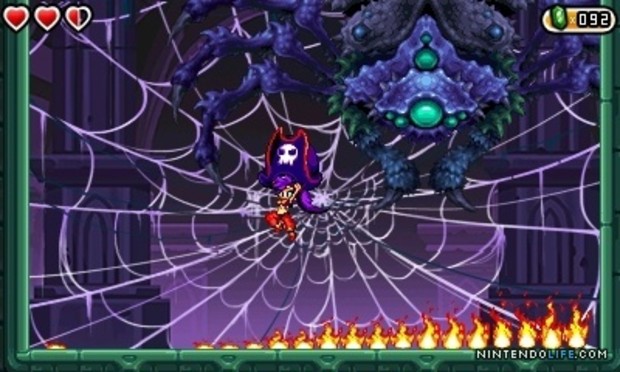 Don't even worry about it. It's just a fire spider. I'm sure it's more scared of you than you are of it.

The stylized touches to this game are absolutely wonderful. As previously mentioned, the sprites and other animations in this world look incredible and provide a creative and immersive environment for the player to dive into. And I would be doing you all a disservice in not mentioning the absolutely INCREDIBLE music that this game boasts. Jake Kaufman does it again by taking a heap of favorite tunes from previous installments and recreating them into even more magnificent works of wonder to compliment the story. It's impossible not to enjoy playing this game when every time you debark onto a new island, you are greeted with a tune that's even better than the last you heard.

Another great feature to this game is the way the dialogue between characters is set up. I'm a huge fan of the dying art that is text only dialogue. While giving your characters a voice can help to connect a player to the characters more, I believe there's a certain amount of free creativity in allowing the player to give each character whatever voice they so desire. Each dialogue box is illustrated by an image, brimming with emotion and personality from the character speaking, adding a sort of comical feel to the mix. While Shantae will speak every now and then, the dialogue is mostly written for the player to read, allowing conversations to feel as fluid as the player wants to read them, at whatever speed the player wants to process them. 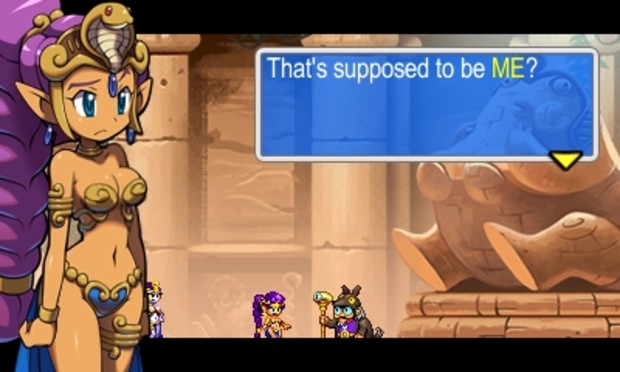 Just in case anyone was wondering if there's fan service to be had...

This game caters to SO many player styles. There's the obivious attraction to the players out there that enjoy platforming. But it also should be said that there are rewards to be had in this game for players (like me) who are completionists; personally vowing to obtain everything there is to obtain in a single title, along with those who aspire to complete an adventure in as little time as possible (you know, Speed Runners).

With such versatility, and so much fun for a straight up FRACTION of what a lot of games cost these days, I just do not understand why not very many people are talking about this game. Do yourself a favor. Save up $20. Pick up Shantae and the Pirates Curse. You won't be disappointed.

Just a gamer. Aspiring VG music composer. Pretty chill but also passionate about the things that matter to me ^_^ Also, one crazy kookaburra.