I’ll have to shelf my career before it begins.

Like many of you who enjoyed the Overwatch League’s inaugural season, I’d sit and watch the action while chip crumbs layered my shirt and I’d think, “I can do what these guys are doin’. No problem. I just need to practice sixteen hours a day, divorce my wife, move to LA, play some local tournaments, and then I’ll rocket to fame in that city as quickly as Guns ‘n Roses or the Chilli Peppers.” I mean, it’s just a matter of rank, right?

Raise your hand if you’re awful at sports. Of course you are—why else would you be reading a video game blog? How many of you were in the way during basketball and ball hockey games on your school’s gym floors? I know I was. I’d participate because I had to, but nobody wanted me out there—the girls, the boys, the gym teacher—it was better for everyone involved if I just sat on the stage, leaned against its dusty navy curtain, and read. If you’re like me, when you’re shoved onto a team you’ll inevitably make the team worse—it’s the only rational outcome. When you close your eyes to remember gym class, do you see the urgent faces of your fellow students as they yell “pass it! pass it!” while you hold the ball and try to figure out what the do next? Some of you must know what I’m talking about. We were a pylon in shorts, right? An obstacle the athletes had to play around.

This is real life, it’s not Rudy. If you can’t do a layup, you’re not going to suddenly dunk on the prom king just because you’re pure of heart. If you’re uncoordinated and unable, then this is fused to your spine; your inadequacy is a part of you. Pimply and under 100 lbs., pushing my glasses higher onto my nose in 1997, I knew these shortcomings to be truths at age fifteen. Here’s the thing, though: you and I were the real champions when the final bell rang and we were on the bus heading home because we knew that our Fallout savegames were just waiting to be loaded on our family PCs. The athletes were the ones missing out, not us.

Sure, I’ve played Slayer in Halo—who hasn’t? I’ve put a thousand hours into Battlefield: Bad Company 2 and I could play a thousand more. I’ve spent time with competitive shooters, but I’ve never been too concerned about competing in them. I’ll have a good round, I’ll have a bad round, I’ll have a nice streak or a stylish kill and then I’ll post the lowest kill-death ratio immediately afterward. I average out, and I’m okay with that. Better to be on a plateau than trying to figure out your carabiner along the foothills, right? If I’m being honest, I certainly had moments of screaming at my TV during those hours of Battlefield. I fill with rage like the rest of you—none of us are immune—but for the most part, I was just there to have a good time.

Overwatch changed things. After a thousand hours or more on PS4, I managed to graduate to the PC version with the big boys. I sit at my circular kitchen table with my $20 generic Logitech mouse and my $7 pad, using my passable Acer Aspire 5, and I do the best I can. To be honest, my best is sometimes pretty good. I can flank to the back line, peel the tanks, harass the supports, and generally mop up kills when a good team is applying appropriate pressure alongside me. I lose my cool sometimes, but for the most part I type ‘gg’ after each match and I can suppress frustration if I’m losing round after round because there’s no meaning to any of it. I’m not on the Barclay Center’s stage, I’m not playing flex for the Fusion, and Uber Shouts has never met me or called my battletag with the intensity he’s celebrated for.

“Playing with children” I’ll repeat to myself when the rage starts to brim. This mantra isn’t meant to slag my random teammates as juvenile, it’s just meant to remind me that I might be playing with eight or ten-year old’s at this very moment, and how could I get mad about a quickplay match with teammates and opponents so young? The match doesn’t matter. My performance doesn’t matter. Relax.

But I want my matches to matter. After all the bullet casings and shots to the dome and detonated C4 bundles over so many years, Overwatch makes me wish I was an athlete. The game is slowly becoming a way of life, and that’s actually a little creepy when you’re thirty-six and your fingers snap like buckled driftwood whenever you tent your fingers (as mine do). Thirty years of video games. Thirty-two, technically. Thirty-two years and playing Tracer in Overwatch has come to represent the most satisfying gameplay I have ever experienced—at least in a multiplayer game. When my Tracer play is on, I can layup, I can dunk, I can get in the paint and drive. Does that analogy work? I don’t actually watch a lot of basketball. Regardless, I finally understand why the athletic guys were so eager for gym class to begin. They could shuffle out of their American Eagle denims, haul on their shorts and Reeboks, and shine.  Sometimes I shine as bright, and the feeling feeds a passion that only sleeps when I do.

So, why not join the league? Quit my day job, go pro? Obviously, I’m not good enough. Just like regular sports, the eSport athletes make it all look far easier than it actually is. These players are hewn diamonds, polished and displayed under glass, fashioned from intense pressure and heat. “God” may be going a bit far as a title, but these individuals are certainly otherworldly, and I’m not of their ilk—never will be. Just like quickplay with the kiddies, my competitive Overwatch matches are, realistically, meaningless. So why can’t I enjoy them?

I tried competitive on PS4 several times, and after just a handful of matches I would say “never again” to my dog and myself as I tried to suppress every urge to whip my controller against a wall. My placement matches generally resulted in a few wins and more losses. I’d begin my season with a terrible rank and with each loss my SR, and seemingly my self-worth, would stoop lower and lower and lower. Wins would see slight increases while losses would produce massive drops—nothing new for experienced Overwatch players. There’s a solution to this quagmire, of course: join a decent team and practice together. Anyone who has spent any time with the game knows that you can’t succeed in Overwatch unless your team is working together, be this intentional or incidental. However, when you’re thirty-six, rounding up a team able to play for longer than an hour a night is unlikely. I can’t organize a group, and I couldn’t play with strangers tutting and huffing into their microphones, blaming everyone on the team except themselves.

Following a loss, if someone cursed my name, saying it was my fault, I’d take it so personally. I couldn’t help it. I’d get so pissed. My fault!? Then I’d check my stats for the round and have one of two reactions: I’d either see that my stats were solid and I contributed my share, in which case I’d puff up and tell myself this guy was just a jerk. Or, if my stats were garbage, I’d pout and start citing reasons I couldn’t do more than I did. Again, only my dog was around to listen. I never used a mic because I didn’t want to find myself getting into arguments with strangers.

Eventually, I said, “F*#% it, I’ll just mute every player through every match.” Since criticism causes me to digitally melt and perform worse, I figured I could only play better by not hearing the general negativity and specific complaints of my pickup teammates. They rarely say anything that’s actually tactical anyway. Of course, it’s hard to communicate with a team if you intentionally make yourself deaf and dumb, so the solution was far from ideal. During those console sessions, I’d dream of shiny Omen towers and Intel processors because I knew PC players would be more reasonable, more mature.

After a few months and a few hundred hours, I’m just not sure I believe that anymore. The gameplay is much more satisfying on PC, as you might expect, but the players are essentially the same; ambitious, impatient, and bitter. Losses still divulge into finger pointing and my rank still sinks. Through the comms, strangers tell me which hero to play (who died and made them shotcaller?), and if we’re not taking the point after several minutes of hitting a wall, it always seems to be my fault. My competitive play is legitimately worse than quickplay and arcade because I can’t enjoy myself—I’ve never researched this, but I know my stats would tell the same tale. But my heartrate beats faster and my pupils dilate with fervor and the competitive wins make me salivate for more, and when the enemy can’t snuff my Sombra and I EMP all six of them, allowing my team to take point B on Anubis, and everyone is complimenting my clutch play, I feel the way Steve Nash must’ve felt every day his sneakers squeaked the court. So, I can’t quit comp. just yet.

I still type ‘gg’ after each match, but when blame falls on me I’m haunted by the accusations for hours afterward and I just can’t let it go. Sometimes, I face blame following a round where I contributed more than everyone else, and I find myself asking, “Why am I bothering?” 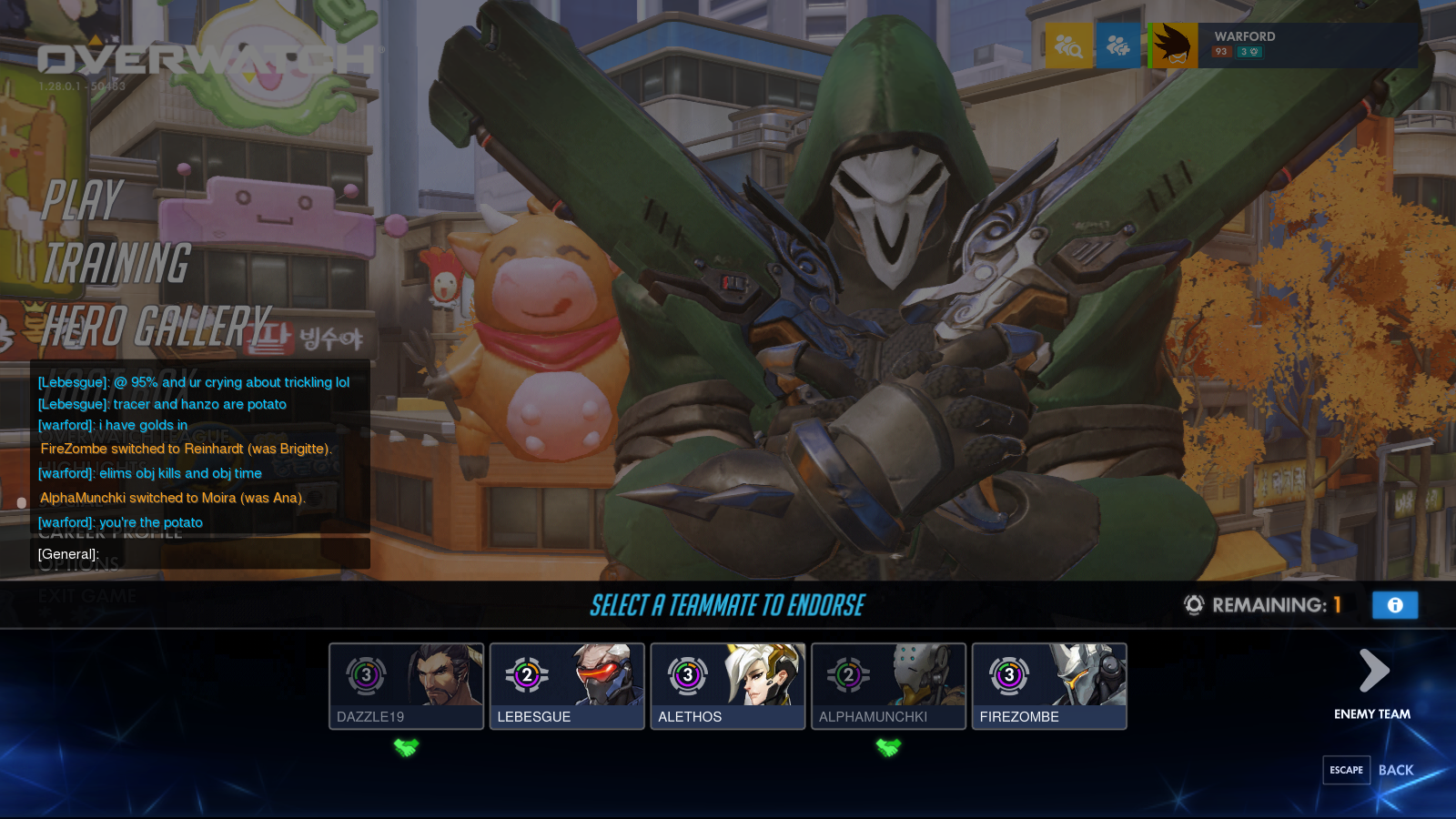 So why do I bother? Should I?

On PC, once again, I find myself muting my teammates because I know I’ll deliver better results if I can’t hear their pissy complaints and admonishments. Once again, I’m a lone wolf in a team’s game and I wonder if the problem really is me. Do I buckle under pressure? Am I not willing to play with others, or is the toxicity that Blizzard’s been fighting to blame? Is it the negativity of people who can’t find happiness in their real lives that is ruining my digital exploits? Maybe it’s never been my ability, maybe I’m not much of a teammate.

I'm a big believer in HUD-free gaming, using the resources within the gamespace to communicate to the player, rather than choking the screen with too many waypoints. But that's me. What about you? Feel free to leave comments here or on my blog posts.