7:20 AM on 12.19.2008 (server time)    0
For those of you who don't know, it was one year ago this week that I started my series of 10 Things I learned this week posts. I wanted to celebrate that milestone in some way so I figured probably the best thing to do was to come up with a list of my favorite games of all time. I write lists every week so I figured this would go with the theme of 10 things. I also wanted to do this because I wanted to start a new series of blogs to go along with my 10 things post called aborto's top 10 where I discuss the top 10 best or worst things in videogames and what better time to start them then on 10 things anniversary. However, I didn't think 10 was special enough so you get Aborto's Top 20. These things will not be a weekly thing like 10 things. Perhaps something monthly so keep that in mind.

Before I get into things I must state that this is my opinion and entirely my opinion. I don't want to get 3000 comments in here stating that I am wrong because a game someone else likes isn't on my list. Don't get me wrong, I do want to get a little discussion going, just refrain from being dicks when reading my list.

And without further ado I give you Aborto's Top 20 favorite games of all time! 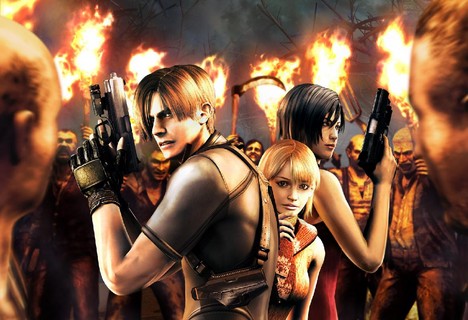 It seems to be the general consensus among some hardcore RE fans to hate this game, and even though I can sympathize with them, I can't disagree with them more. Simply put, Resident Evil 4 is my idea of the ideal game. It never gets boring or repetitive and the game is practically one memorable encounter after another. Unlike other games whose experience blurs together I remember pratically every moment in RE4 because everything in it is just excellent. The first open area where you encounter the villagers and the time when you are under seige in the cabin with Louis in addition to a lot of the boss battles are among the best moments in gaming. That and it is probably the only game ever to do escort missions right and actually make them fun. Sure Ashley was annoying (when you think about it, it is kind of hard not to make a helpless person depending on you to save them annoying), but she was never a nuisance. That and it was still scary. Maybe not the same type of scary as the originals but scary nonetheless.

But the beauty of RE4 is that it finally fixed the problems that have been in RE games since the original. Namely the camera, controls, and save system. The fixed camera and controls I have to admit added to the fear of previous Resident Evil games, but I would be lying to you if they didn't get on my nerves from time to time or lead to unnecessary deaths. The new camera works better then the original ever could and the controls work better while still feeling like Resident Evil. That, and they took out the damn ink ribbons. It baffled me that they kept them in for as long as they did because it was an unbelievably stupid idea. Basically in RE4, they took away the things that always bugged me about the Resident Evil games leaving a near perfect experience.

Sure I miss Umbrella, zombies, raccoon city and can understand why people would be upset over their loss but this game is so damn good and I don't think I have ever had as much fun ever playing a game before. This game definitely deserves this place on my list because it is the best damn game I have ever played.
#Community
Login to vote this up!