30 Things I learned this past month: Comic-Con and such Edition

alright, I was never truly gone. I just wasn't posting blogs and I wasn't posting comments as much as I usually do. I was on vacation and between that and friggin Comic-Con I didn't have much time for Destructoid. But I am back know and it appears that I have alot of work to do to get back to where I was on the Destructoid leaderboards.

Speaking of Comic-Con, I have some blogs planned about it. I have a lot of pictures to unload on you guys so prepare for that.

2. How to correctly pronounce Tazarthayoot's name.

3. Niero is very generous. During Comic-Con we went to this restaraunt for lunch, and he bought the food for everyone. The check was like 200$!!! I didn't even see him pay it. He's like some sort of money ninja.

Speaking of which thanks alot Niero.

4. Todd Mcfarlane is finally coming back to the Spawn Comics! Thank god, because these new ones have been becoming progressively worse. 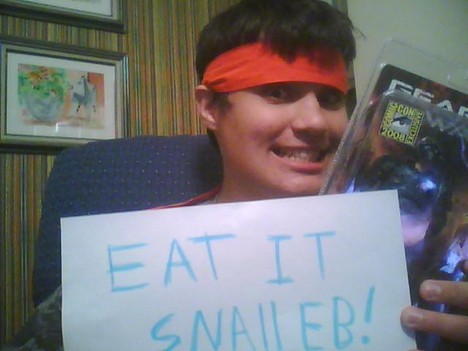 7. The Mummy: Tomb of the Dragon Emperor the Videogame is the best videogame ever made. Knives, a New Challenger, and me were playing it on the show floor at Comic-Con and it's absolutely amazing! Best game I played on the show floor!

(Note: If you couldn't tell, I was being sarcastic)

8. Street Fighter 4 is absolutely amazing. I didn't expect much since I'm not too big on fighting games but my god is it fun. It also looks excellent.

9. Ghostbusters The videogame is amazing as well.

10. It is very depressing not being able to see Chad at Comic-Con.

12. That I really want to see the new Batman TV show.

13. I am a friggin' ninja! I got on the front page of Destructoid without anybody knowing. You know when Hamza wrote about somebody asking Marvel about another Marvel vs. Capcom game at Comic-Con? How they said it may happen sooner than everybody expects? Well guess who asked that question at the Marvel panel? I DID!

14. The Dark Knight is fantastic. I found Batman's voice a little annoying however. Why did they insist on him sounding like he has a severe case of throught cancer?

15. Step Brothers is hilarious. Which I was surprised about considering it is a Will Ferrel movie and I have really low expectations for movies with him in it.

Don't ask me how I found this.

18. That, apparently, Ron Workman is leaving Destructoid. Which makes me a sad panda.

20. You could make the custom female characters in SC4 have really large breasts! Hooray!

I'm perhaps a little too excited about that.

21. There is something severely wrong with Wardrox. He continues to play COD4 even though he hates it. For the love of god why Wardrox? Why do you continue to play a game you hate? It's mind boggling.

22. The Apprentice in SC4 is a complete bastard.

24. Unstoppable Juggernaut is extremely grateful when people get him action figures.

25. Everybody loves Tazar (except Charlie).

26. Having multiple guests on the podcastle turns it into a complete clusterfuck.

27. The Watchmen movie looks like a complete pile of shit. Why is everybody so excited about this? There is no doubt in my mind that Zach Snyder is going to rape it into oblivion. For fucks sake, the music in that trailer alone made me want to dropkick a panda. Am I the only Watchmen fan that hates Smashing Pumpkins? Jesus tap dancing christ.

Zach Snyder, stay away from my favorite comic book you bastard.

28. Kingdom Come is an awesome comic

30. That making this blog was a pain in the ass.
#Community
Login to vote this up!