11:13 AM on 12.21.2013 (server time)    0
As none of you will know, I possess a time machine I use to frequent the future for the singular purpose of playing brand new products before they release in the primary timeline. As a result, I have immense knowledge of future gaming industry events and I've decided to share with you a review of Witcher 3.

Geralt's journey ends with the Witcher 3: Wild Hunt, but the final hurrah is CD Projekt Red's most ambitious endeavor to date. While the previous Witcher games have had their fair share of criticisms and issues, I can safely proclaim that everything they've ever done has coalesced into the greatest open world RPG you will ever get your hands on. Geralt will ride off into the sunset with treatment deserving of a famous monster slayer. While not everyone will be on board for the whole experience, you'll be doing yourself a disservice by not imbibing in this sweet alchemic mix.

The game starts off with an incredible set piece where Geralt is fighting the riders of the Wild Hunt, and from the very beginning the player understands just how dangerous these otherworldly elven masters of war can be. Contrary to previous entries of the Witcher series, Geralt has his full gamut of abilities at his disposal and the risky caveat of this benefit is that as the game progresses, he slowly loses his fighting ability. The Wild Hunt general, Darvanish Tornfold, curses Geralt with powerful magic that not even his most stalwart companions can do anything about. What this creates is an RPG experience unlike anything that's been seen since Zelda: Majora's Mask.

The player has a limited amount of time (72 hours) to stop the Wild Huntsman from achieving their nefarious goals before Geralt succumbs to the spell put under him. Have no fear, because the rumors were true: there is over 140 hours of content overall to quest and slash your way through. Once the main storyline is complete, you can explore the rest of Temeria with all of your powerful signs and impressive swordsmanship back in service.

Newcomers to this series may feel a little out of depth, since the game continues after the previous installments had already established many characters and concepts core to the storyline. Nonetheless, sensing that this may steer people away from the Wild Hunt, CD Projekt Red made sure to ease players into the lore of the game by offering quick comic style cutscenes similar to those in Assassins of Kings and plenty of background journal entries for those that have a penchant for reading. It may be prudent to thumb through some of those entries, since a lot of characters absent from the series since the first Witcher make their second debut to tie off the tale. As for the manner in which Geralt weaves about the people within the world of Temeria, it is nothing short of breathtaking.

When Witcher 2: Assassins of Kings was released, the development team experimented with creating scenarios that would change based on the type of response you select, akin to Mass Effect's paragon/renegade interrupt system. This boiled down to Geralt choosing to intimidate, charm, or Jedi mind trick a target into a favorable outcome. Most of the time, whatever occurred had no real effect, and in rare cases a quest would fail. However, in Witcher 3, the way you utilize your abilities in conversation make such an impact, that the ending with several characters will change drastically based on how you've treated the people Geralt interacts with. The conversation system is deeper than previous installments, so be prepared to experiment with numerous methods in dealing with the NPC's inhabiting this visually stunning world. 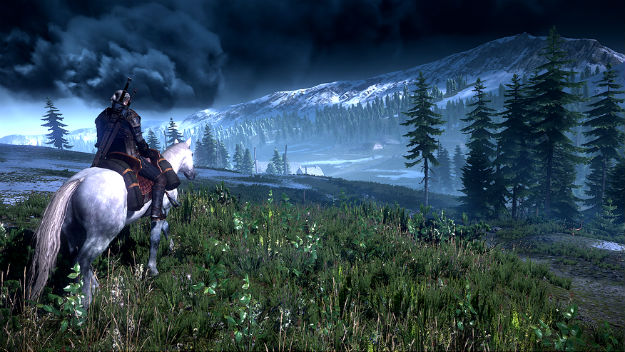 Speaking of visuals, this game is drop dead gorgeous. With proper driver support and several high-end graphics options, those of you who have invested in a beastly gaming rig will be opulently rewarded. Even my 800 series GTX was sweating during some of the scenes and vistas you can visit during your stay in Temeria. SLI is a must if you're going to utilize PhysX, which creates the most realistic cloth physics I've ever seen. Let's just say I stalked many a caped individual until they became so distraught, they panicked, and I had to hunt them down, kill them, hide the body, and hope no guards were alerted. During this time, their cape continued to woefully sway in the dying wind. Shh. Don't let anyone know.

As for the combat, it's night and day when compared to Witcher 2. The previous game started with challenging circumstances that gave way to such an easy breeze after a few levels, I wondered if the only attacks every soldier I squared off with amounted to wet farts and overconfident dialogue. With Witcher 3, Geralt is a lean mean slaying machine at the outset, and based on how fast you can get to the ending, the situations become more calamitous.

There is one scene towards the end of the game in particular that strikes a poignant chord with me. Geralt can barely raise his sword. An old man is blocking the door to a burning house he must enter. The combat begins. The old man raises his walking stick and overpowers the Witcher as sad violin music plays against a wistful backdrop of depressed, shit-covered villagers and a pigsmith hammering new hooves on a farm animal. To think that CD Projekt Red was able to create such drama from such a simple scene is nothing short of mind-blowing.

To offset the fact that Geralt begins losing his capabilities throughout the main plotline, a surprising companion sees him through his journey. In a strange twist, Triss Merigold, Zoltan Chivay, and Dandelion take a backseat. Even the oft mentioned Yennefer takes second fiddle to the true sidekick of the famous monster slayer: his horse. Though the initial trailers didn't emphasize the role of your steed, he ends up being your greatest friend and ally. While the talent tree for Geralt is there to try and hold onto some of his waning power, the horse upgrade tree is full of utility, healing, and combat abilities. Never before has a game allowed you to custom tailor your horse this much.


The utility tree allows your steed to carry a shocking number of items, while the healing section teaches your friend the perfect ways in which to wrap a medicated bandage around the most grievous wounds. The combat tree culminates in your horse learning how to hold a knife in its mouth, and it will charge targeted enemies and just straight up stab them like a boss. Alchemy also makes a big comeback in the Wild Hunt; with the player no longer needing the now infamous level of clairvoyance to determine which potions should be consumed when.

Now Geralt has an audible internal monologue where he states helpful information such as "There's a troll under that bridge. I better drink some trollbane so I can rip those stupid wooden planks from his back and beat his ass till its sore." Or, "Nekkers are slinking around here. I better apply whatever oil is effective against Nekkers. I forgot. Fuck! Those goddamn Wild Huntsman have completely screwed me. There's nothing I can do. Maybe I should just...oh wait, it�s oils that augment bleeding effects. Phew, that was close Geralt." The only problem with these monologues is that sometimes they're so long and winded, that the Witcher will frequently continue thinking them while fighting. It doesn't happen often though, so it can be overlooked.

�
Going back to the mount once more, it's important to note that he has amazing AI. Remember Assassin�s Creed III? Every mount would follow you around as though you had wrist mounted sugar cube dispensers. They sometimes got in the way of you trying to interact with a quest NPC. In Witcher 3, your horse will always stay out of your way until called. It will peer at you from behind street corners or plop its ass down on a bench and gently neigh. In addition, based on how you play, the horse will react appropriately.

If Geralt has made too many bad decisions, your steed will go around biting small children and spitting on guards. If you make the correct moral choices, the horse will lick women and wink at passerby, exuding the confidence of a true stallion. �Even the monsters you slay are a gray area. In an early quest, Geralt must confront an evil unicorn named Horrihorn. If you decide to slay him, a village will be saved from further attacks, but if you spare him, he'll give you a bitching magic eye patch and then just fuck off. He does create a lot of orphans because you let him go, but hey. Bitching eye patch.

Lastly, while the story is fascinating and immersive, there are some discrepancies that should have been addressed. For instance, while the Wild Huntsman are ravaging every small hamlet and major city in the countryside, no one seems to care. Villagers continue to talk about politics whether their cottage is burning or not. The words on everyone's lips seem to regard the invading army of Nilfgard, instead of the armor clad ethereal elven specters waving blazing swords around. The game does end up addressing it when the Elven Master General stops his villainous speech mid-sentence, slumps his shoulders, and rides off to another township.

All in all, the Witcher 3 Wild Hunt is a must have game. It's a highly polished product and the issues are so few, even the most cynical gamer will find something to love here. It's a hell of a ride. Don't miss it.

(Note: �I have played both the European and American releases of this game. Unfortunately, the American version has censored those hot undersea mermaids that come up during your travels in your horse-piloted boat. No aquatic tit makes an appearance. The American version compensates for this by adding a phallic sword to every mermaid�s hand and giving them a frustrated expression. This is the price America must pay for prioritizing violence over sex.)

Reviewed by Zuckerhund
Login to vote this up!