11:13 AM on 09.12.2012 (server time)    0
Of all the interviews we've done with humans so far, this one is the most surprising and useful. Ninjapresident has captured a human with some fascinating insights into humanity's general knowledge of zombies. Let's go, baby!

I might say many things, but this is all I'll say for now: You'll never catch me when I escape. I have a tunnel behind that poster you gave me that leads to the outside world. Oh, um, wait. Forget I said that. In fact, it's best for me to be done with this question now.

2. Your favorite videogame. Explain in 6 words.

The Last Guy, a zombie, yes.

3. Have you heard of the Zombie who is Orwell?

I've heard things, but they're all lies from what I can tell. I mean, what zombie could disembowel 5 humans in one day? He's just a fairy tale, made up by the United Nation of United Zombies Union. All this propaganda just makes me sick.

4. Have you heard of the Samit who is Sarkar?

Who, the guy who's the head of the anti-zombie force? Yeah, I've heard of him, Ol' Browneye. In fact, we have been in cohorts for sometime and I decided we should- Awwwwwwwww crap. I did it again. Here comes the flogging. Erg. I should really watch what I say.

5. How might one set about the task of overthrowing human society? Hypothetically.

Oh, hypothetically! I was about to get worried. First thing I would do is cut off the water filtration system owned by the AZO. I'm sure you're familiar with the work of The Anti-Zombie Zombie-Anti Organization. After you do that, I would seek Ol' Browneye and make him your puppet. People can be easily swayed under the right conditions. I'm sure a giant zombie parade would work. Those Chemical Relationships and Flamer Hips had the wrong idea with their skeletons and such. Zombies are the way to go. Lots and lots of zombies would work. If there (somehow) still was a threat, I'd send them a press release telling them Activation had closed down and the Call of Duty franchise was canceled forever. I'm sure that would get rid of the remaining few. They'd have no reason to live. And that my friend, is true pain. So, yeah, hypothetically that would be how you do it. Good thing that question wasn't for realzies, otherwise I'd be screwed! 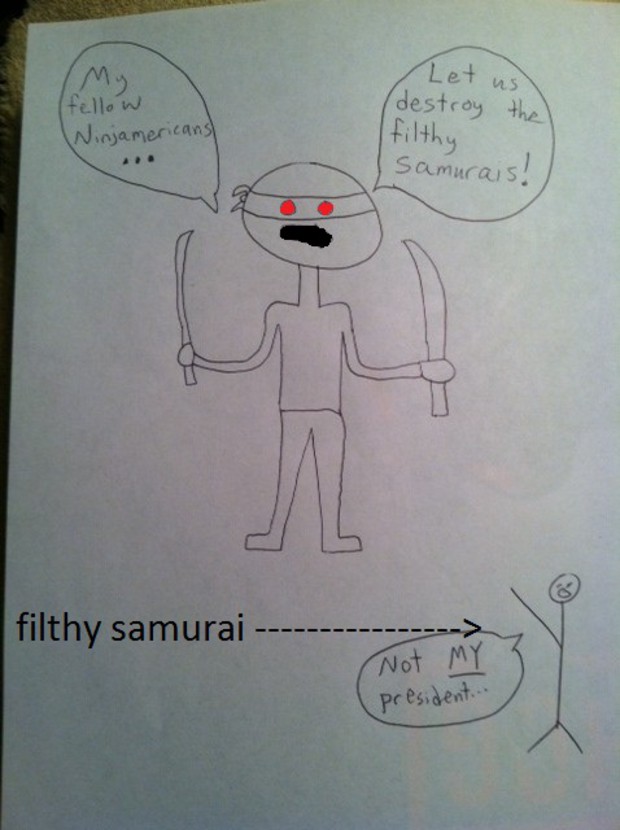 7. What game has the best controls?

You know, I hate to say it, considering I'm a human and all, but they is definitely some poetic justice in how humans are controlled and all in Revelations 2012. I mean, it really makes you sit down and think about how all our efforts in destroying things with arm braces and flailing around are futile, and that we should just dance our cares away in the most ridiculous ways possible. I find it beautiful in message that all humans can relate to (even if they don't want to admit it). There's something emotionally stirring in that, you know?

8. If you are granted the prestigious position of "Secretary to the Gods" what will be your first official action?

I have to recall the words of Mary Antonioette in this situation, as some decree of my own creation would not work. So, as you all should know, I would let them shake and bake. What else could I do?

I regret nothing except all the things I did that were regretful.

Shout out to all my friends at Secret Base 9 in the Alps! You guys keep working on the anti-zombie mist, it'll work eventually!

You know, to be fair, my mother really loved me as a child. That, and I never played The Legend of Zelda: Ocarina of Time. But those are almost the same things when you think about it...


That's all for this interview dear comrades and comrettes! Dear sistren and brethren! Dearest dearest followers and collaborators! In an upcoming post I will synthesize the info we've gleaned so far by talking to humans. (There are some extremely interesting things in this interview that will assist us greatly.)

Also, if you would like to capture and interview your own filthy human, let me know!

Your leader,
Zombie Orwell
#ShareonCommunityBlogs
Login to vote this up!